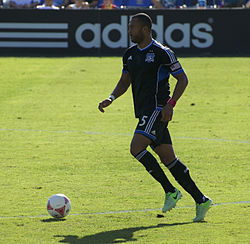 Víctor Bernárdez began his career in La Ceiba with his hometown club Vida. His play with Vida earned him a move to top Honduran side Motagua.

Bernardez scored several important goals in his time with Motagua, including a brace against Olimpia to win the Apertura final 4-2 on aggregate. He also scored a 40-yard free kick in El Clasico de las Emes, capping a 4-1 win for Motagua on 2 July 2007. He was linked to Anderlecht as well as many Major League Soccer teams in the winter market. However, in January 2009, it became official that he had been loaned to Anderlecht for six months.

He scored his first goal for the team on 7 February 2009 against Mons during his second appearance with the squad. In January 2011, Bernárdez was sent to Lierse S.K. on a five month loan. Later in the year he was again sent on loan, this time to Mexican club Indios de Ciudad Juárez. Bernárdez was an important player for Indios appearing in 11 matches and scoring 3 goals.

On 28 December 2011 San Jose Earthquakes of Major League Soccer announced that they had signed Bernárdez.[3]

He made his debut for Honduras in a March 2004 friendly match against Venezuela and has earned, as of June 2012, a total of 64 caps, scoring 4 goals. He has represented his country in 23 FIFA World Cup qualification matches[4] and played one match at the 2010 FIFA World Cup. He also featured at the 2007 UNCAF Nations Cup[5] as well as at the 2011 CONCACAF Gold Cup.[6]