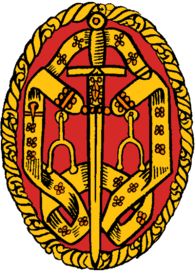 Insignia of a Knight Bachelor

Pritchett (alias VSP) was known particularly for his short stories, collated in a number of volumes. His most famous non-fiction works are the memoirs A Cab at the Door (1968) and Midnight Oil (1971), and his many collections of essays on literary biography and criticism.[1]

Victor Sawdon Pritchett was born in Ipswich, Suffolk, the first of four children of Walter Sawdon Pritchett and Beatrice Helena (née Martin). His father, a London businessman, relocated to Ipswich to establish a newspaper and stationery shop. The business ran into difficulty and his parents were lodging over a toy shop at 41 St Nicholas Street in Ipswich where Pritchett was born on 16 December 1900. Beatrice had expected a girl, whom she planned to name after Queen Victoria. Pritchett disliked his first name, hence he always preferred being styled by his initials "VSP", despite formally becoming "Sir Victor Pritchett" after being knighted.

Pritchett's father was a steady Christian Scientist but unsteady in all else. Walter and Beatrice moved to Ipswich to be near her sister, who had married money and lived in Warrington Road. Within a year Walter was declared bankrupt, the family moved to Woodford, Essex, then to Derby and he began selling women's clothing and accessories as a travelling salesman. Pritchett was soon sent with his brother Cyril to live with their paternal grandparents in Sedbergh, where the boys attended their first school. Walter's business failures, his casual attitude to credit and his easy deceitfulness[lower-alpha 1] obliged the family to move frequently. The family was reunited, but life was always precarious. They tended to live in London suburbs with members of Beatrice's family, but returned to Ipswich in 1910 to live for a year near Cauldwell Hall Road, trying to evade Walter's creditors. At this time Pritchett attended St John's School. Subsequently he attended Alleyn's School, and Dulwich College, but he stayed nowhere for very long. When his father enlisted to fight in World War I, Pritchett left school. After the Great War[lower-alpha 2] Walter turned his hand to aircraft design, about which he knew nothing, and his later ventures included art needlework, property speculation and faith healing.

Pritchett was a leather buyer from 1916 until 1920 when he moved to Paris to work as a shop assistant. In 1923 he started writing for The Christian Science Monitor, which sent him to Ireland and Spain. From 1926 he wrote reviews for that paper and for the New Statesman, later being appointed its literary editor.[2]

Pritchett's first book, Marching Spain (1928), describes a journey across Spain, and his second book, Clare Drummer (1929), is about his experiences in Ireland. While he was there he met Evelyn Vigors, the woman who became his first wife. Theirs was not a happy marriage.

Pritchett published five novels, but he said he did not enjoy writing them. His reputation was established by a collection of short stories, The Spanish Virgin and Other Stories (1932).

In 1936 he divorced his first wife and married Dorothy Rudge Roberts, by whom he had two children; the marriage survived until Pritchett's death in 1997, although they both had other relationships. Their children include the journalist Oliver Pritchett, whose son is the cartoonist Matt Pritchett MBE.

During the Second World War Pritchett worked for the BBC and the Ministry of Information while continuing to write weekly essays for the New Statesman. After World War II he wrote expansively and embarked on various university teaching positions in the United States: Princeton (1953), the University of California (1962), Columbia University and Smith College. Fluent in French, German and Spanish, he was published with acclaimed biographies of Honoré de Balzac (1973), Ivan Turgenev (1977), and Anton Chekhov (1988).

The V.S. Pritchett Memorial Prize was founded by the Royal Society of Literature at the beginning of the new millennium to commemorate the centenary of the birth of "an author widely regarded as the finest English short-story writer of the 20th century, and to preserve a tradition encompassing Pritchett’s mastery of narrative".[5] This prize is awarded annually, with up to £2,000 being given for the best unpublished short story of the year.[5]