V Festival is an annual music festival held in England during the penultimate weekend in August. The event is held at two parks simultaneously which share the same bill; artists perform at one location on Saturday and then swap on Sunday. The sites are located at Hylands Park in Chelmsford and Weston Park in South Staffordshire. Although predominantly a rock music festival, a wide range of musical genres are accepted; in recent years pop acts have become more common.

The "V" represents the Virgin Group, with the event being sponsored by Virgin Media. It was previously televised by Channel 4, predominantly on their sister channel 4 Music, although for the 2014 edition of the festival it was announced that television broadcast rights would be returned to MTV.

The idea for V came in 1996 when Pulp's front man Jarvis Cocker announced he would love to play two outdoor venues in two days. Pulp's promoters got together and came up with the idea of putting the gig into Victoria Park Warrington and Hylands Park Chelmsford giving fans in both the North and South a chance to see the band. Then came the idea of adding more bands to the bill, putting on a second stage and letting people camp for the weekend. In the end Victoria Park was just too small for 3 stages and camping. So in August 1996 there was one day of artists in Victoria Park and 2 days at Hylands Park with camping. The northern leg of V97 was switched to Temple Newsam, Leeds to provide room for camping and three stages. In 1999 the Northern leg of the festival was moved to Weston Park in Staffordshire, and has remained there since.

Previously it had been held at Temple Newsam in Leeds, before being replaced by Carling's Leeds Festival. Originally, the festival took the name of the current year, with the first festival being named "V96". Since 2003 it has been known as simply the V Festival. Its weekend format, low queuing times and professional organisation have given it a loyal audience. The festival sold out in record time in 2006.

Mel C, Dido, and N.E.R.D. have all performed at the festival, and both Razorlight and Faithless performed in 2006. V showcases a mix of British and international musicians, from up-and-coming bands such as Coldplay in 2000 and the Kaiser Chiefs in 2003 and 2008, and glam rockers El Presidente in 2005, to veteran crooner Tony Christie. Girls Aloud also performed at the 2006 show, and received rave reviews for their performance. V97 was the first V Festival to be webcast. This was audio-only, and had about 30,000 unique listeners

Festivals and line-ups by year

The first V festival took place on Saturday 17 and Sunday 18 August 1996, and had two stages and one tent.

This year introduced the NME stage.

Richard Ashcroft (of The Verve) goes solo and Travis unveil their cover of Britney Spears' "...Baby One More Time"

Channel 4 Stage: The Prodigy, The Hives, The Music, Turin Brakes, The Ordinary Boys, Thirteen Senses, I Am Kloot, The Frames, El Presidente, No Hope In New Jersey

Tickets for the festival went on sale on Monday 27 February, exclusively to Virgin Mobile customers, and went on general sale on Friday 3 March.

There were complaints from festival-goers in 2006 due to the excessive price of food and merchandise, and lack of prior information about the band schedules, the only timetable available being a programme sold at the festival. Despite knowing the numbers attending, the print run of programmes was sold out.[1]

The "Road To V" competition for 2006 was won by Bombay Bicycle Club and Keith.

The line-up for V Festival 2007 was revealed on Virgin Radio on Monday 26 February 2007 and tickets went on sale on 1 March.

The line-up was as follows:

Channel 4 Stage: The Kooks, Manic Street Preachers, Lily Allen, Mika, Guillemots, The Hours, Basement Jaxx, The Coral, Babyshambles, Jet, The Fray, The Cribs and Captain, as well as Road To V winners Rosalita and The Brightlights. Foo Fighters also performed an acoustic set under the name 606.

Amy Winehouse was supposed to play but cancelled due to admittance into rehab. She was replaced by Happy Mondays. Babyshambles were four hours late for their set at Weston Park after being held up by traffic.[2][3] Robyn replaced The Bravery. 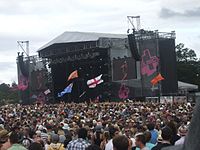 Tickets for V 2009 went on general sale on 6 March 2009. A limited number of tickets went on sale at 10am on 19 August 2008, following the end of the 2008 festival. Weekend tickets were priced at £132.50 (no camping) and £152.50 (with camping) for the weekend. On 2 March 2009 NME confirmed The Killers and Oasis as headliners.[5] However, Oasis did not perform in Chelmsford due to illness (viral laryngitis).[6] Oasis split-up as a band just weeks later, making their Staffordshire show their last.

The 2010 lineup for V Festival was officially announced on 11 March 2010 through the festival's site and on Absolute Radio. The headliners for both days were Kings of Leon and Kasabian. Tickets went on sale on 5 March 2010 at 9:00, with Virgin Media customers pre-sale tickets being available on 2 March, and Essex residents tickets being available on 4 March from 9:00. General sale tickets became available at 9.00am on 5 March 2010. Organisers said they sold out in record time, just one and a half hours.[7] Cheryl Cole was supposed to headline the Arena but had to cancel due to Malaria.

Line Up according to the official V Festival programme.

The final line-up for V Festival 2012 was announced on Tuesday 7 August. In contrast to previous years, some tickets remained on sale until the week of the festival.

Nicki Minaj cancelled her appearance at this weekend's festival because of damage to her vocal cords.[8] LMFAO was moved up to headliner spot whilst DJ Fresh performed in LMFAO's place.

In the week running up to V Festival both Frank Ocean and Dappy were removed from the line up due to undisclosed reasons, they were replaced by The Charlatans and Wiley.

Performers such as Sean Lock and Milton Jones appeared in The Glee Club Comedy Tent.

Pop Artist James Wilkinson was appointed Official Artist to the V Festival. The first person to be appointed in 16 years of the Festival. url=http://www.nme.com/photos/v-festival-2012-in-photos/280661/1/1#14

At the 2013 edition of the festival, Beyoncé made only her second and third European festival appearances of the calendar year. The other main stage headliner was Kings Of Leon, with headliners on other stages including Jamie Cullum, Basement Jaxx and former Swedish House Mafia DJ Steve Angello.[9][10]

For the 2013 edition of the festival, one stage was renamed: the stage previously known as 'Virgin Media Undercover Tent' now became known as 'Futures Stage'. A poster released by the organisers initially seemed to suggest that the stage previously known as '4Music Stage' had been renamed as 'Stage 2', leading to speculation that Channel 4 had ended their sponsorship of the event, however a revised version of the poster released later reinstated the original name of the stage.[11][12]

Multiple changes were made to the bill in the days leading up to the festival. Beady Eye were scheduled to headline opposite Beyonce on the 4Music Stage, however they had to cancel all live shows through August 2013 because of the hospitalisation of member Gem Archer. Thus, their headlining slot on the 4Music Stage was taken over by Steve Angello, whose own previous headlining slot on The Arena Stage was taken over by Ocean Colour Scene. Ocean Colour Scene had themselves previously been scheduled to play an earlier timeslot on the main stage on the opposite day - that slot was taken over by Scouting For Girls, whose previous slot on the 4Music Stage was in turn taken over by previously-unannounced act Reverend and The Makers. In unrelated developments, Little Mix were removed from the line-up for undisclosed reasons, and their fellow The X Factor winner James Arthur also cancelled his appearance the very day before the festival, citing a throat infection. Finally, on the official V Festival lanyard offered to festival attendees upon their arrival on site, it was confirmed that four previously-unannounced acts had been added to the Futures Stage - these were James Bay, Hero Fisher, Gamu Nhengu and Paul McCartney's son James McCartney.

The majority of the line-up, with day and stage splits, was announced on May 30, 2013. With the Comedy Stage line-up announced later, as well as the changed outlines above, the full bill ended up as follows:

The 2014 edition of the festival, the first to be staged with the new shareholders Live Nation and new broadcaster and sponsor MTV, took place over the weekend of 16–17 August 2014. The main stage headliners were Justin Timberlake and The Killers, as announced at 8pm on Monday 3 March 2014, with tickets on general release the following Friday morning. Other high-profile bookings included Paolo Nutini and Ed Sheeran, who had between them released the two biggest-selling albums of the year up to the festival, and festival debutants included Chic featuring Nile Rodgers, Janelle Monae and Kodaline.

Manic Street Preachers had to cancel their show at Chelmsford due to being delayed in Budapest, Hungary at the airport after the Sziget Festival.[13]

The festival has been noted for its commercial nature[14] in comparison with other British music festivals. V Festival has received criticism for charging £10 to buy a programme - the only way festival-goers can see what time artists are performing - while others have mentioned the fact burgers cost £7 and water bottles are sometimes confiscated at the entrance, costing up to £2 once inside the grounds. Buying four crates on site would cost a person the same price as a ticket.[15] Some fans have referred to the organisers of the event as 'greedy'.[16]

Despite this, the New Statesman argues that the commercial nature has some advantages:
"Yet there are undeniable advantages to the [commercial] environment. V is a remarkably non-threatening festival, with few of the rougher edges prevalent at other large-scale gatherings."[14]

The Evening Standard gave the 2009 festival 3/5 stars after headliners Oasis pulled out of the Hylands Park leg of the festival due to illness.[17] Furthermore, approximately 800 people were injured, mainly due to falls causing sprains and ankle injuries.[18]

In 2012, during Cher Lloyd's performance, the crowd booed and a bottle filled with urine was thrown at her, causing Lloyd to walk off stage. She came back on to finish her set but another bottle was thrown and she ended her set early.[19]