From Infogalactic: the planetary knowledge core
(Redirected from Vaison)
Jump to: navigation, search

Vaison-la-Romaine (Latin: Vasio Vocontiorum) is a commune in the Vaucluse department in the Provence-Alpes-Côte d'Azur region in southeastern France.

The historic section is in two parts, the Colline du Château on a height on one side of the Ouvèze, the "upper city" and on the opposite bank, the "lower city" centered on the Colline de la Villasse. 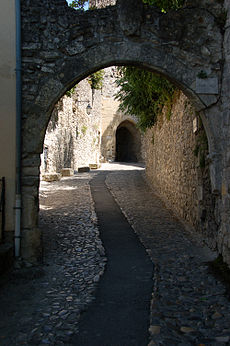 The area was inhabited in the Bronze Age. At the end of the fourth century BCE, the upper city of Vaison became the capital of a Celtic tribe, the Vocontii or Voconces. After the Roman conquest (125-118 BCE) the Vocontii retained a certain degree of autonomy; they had two capitals, Luc-en-Diois (in modern Drôme département), apparently the religious center, and Vaison. Their continued authority in the gradual Romanization of the Celtic oppidum[1] meant that the city plan incurred no disruptive re-founding along rigid Roman orthography.[clarification needed] The city's modern archaeologist Christian Goudineau has suggested that early examples were set by Vocontian aristocrats who moved down from the oppidum and established villas along the river, around which the Gallo-Roman city accreted.[2] In the Roman period it became one of the richest cities of Gallia Narbonensis, with numerous geometric mosaic pavements[3] a fine small theatre on a rocky hillslope, probably built during the reign of Tiberius, whose statue was found in a prominent place on its site.[4] The Polyclitan Vaison Diadumenos (now in the British Museum) was discovered in the theatre in the nineteenth century.[5] At Vasio Pompeius Trogus, the Augustan historian, was born.

The barbarian invasions were presaged by a pillaging and burning in 276, from which Roman Vasio recovered, but in the fifth century the benches of the theatre began to be reused as Christian tombstones. Vaison belonged the Burgundians, was taken by the Ostrogoths in 527, then by Clotaire I, King of the Franks in 545, and became part of Provence

The disputes which broke out in the twelfth century between the counts of Provence, who had refortified the ancient "upper town" and the bishops, each of whom were in possession of half the town, were injurious to its prosperity; they were ended by a treaty negotiated in 1251 by the future pope Clement IV, a native of Saint-Gilles-du-Gard.

At disturbed times of the Middle Ages, the inhabitants emigrated to the higher ground on the left bank of Ouvèze, with the shelter of the ramparts and a strong castle. From the eighteenth century most of the population had moved back down to the plains by the river.

A flood struck Vaison-la-Romaine on 22 September 1992, costing $1.5 billion in damages. It was the town's worst flood since 1632, and was featured in the Discovery Channel series Destroyed In Seconds. 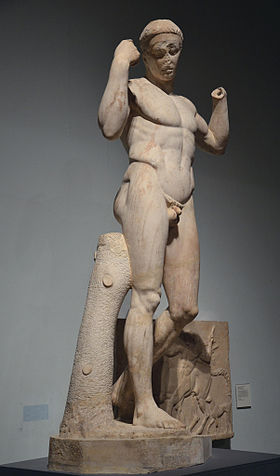 The Vaison Diadumenos in the British Museum

One of the most interesting aspects of the town is its geography, and its Roman ruins. The Roman ruins and the modern town are in the valley on the banks of the river Ouvèze which is crossed by an ancient bridge from the 1st century AD.

The medieval town is high on the rocky cliff. The valley floor was safe from attack in Roman and modern times. In the Middle Ages attacks were frequent, and the town retreated up-hill to a more defensible position.

The apse of the Church of St. Quenin, dedicated to Saint Quinidius, seems to date from the eighth century; it is one of the oldest in France.

As a whole the cathedral dates from the 11th century, but the apse and the apsidal chapels are from the Merovingian period.

At Vaison-la-Romaine, a street was named Impasse Alice Colonieu.

The town also has a famous open air market held on Tuesdays year round.[6]