From Infogalactic: the planetary knowledge core
Jump to: navigation, search
For the EP by Mayday Parade, see Valdosta (EP).

Valdosta is a city in and the county seat of Lowndes County, Georgia, United States. As of the 2010 Census, Valdosta has a total population of 54,518,[4] and is the 14th largest city in Georgia.[5]

Valdosta is the principal city of the Valdosta Metropolitan Statistical Area, which in 2010, had a population of 139,588.[6]

Valdosta is the home of Valdosta State University, a regional university in the University System of Georgia with over 10,900 students,[7] and Valdosta High School, home to the most winning football program in the United States.[8]

It is called the Azalea City as the plant grows in profusion there; the city hosts an annual Azalea Festival in March.

Troupville, now virtually abandoned, had been named after Governor George Troup, for whom Troup County, Georgia, was also named. Valdosta was named after Troup's estate, Val d'Osta (occasionally the Valdosta spelling was used as well), which itself was named after the Valle d'Aosta in Italy. The name Aosta (Latin: Augusta), refers to Emperor Augustus. Thus, the name Valdosta can be interpreted literally as meaning "Valley of Augustus' City". Originally, a long-standing rumor held that the city's name meant "vale of beauty."[10] The land around Valdosta is flat.

After the American Civil War, over one hundred African Americans, families of farmers, craftsmen, and laborers, emigrated from Lowndes County to Arithington, Liberia, Africa, in 1871 and 1872, looking for a better life. This was made possible with the support of the American Colonization Society. The first group, which left in 1871, was led by Jefferson Bracewell, and the second group was led by Aaron Miller.[11]

In November 1902, the Harris Nickel-Plate Circus' prize elephant, Gypsy, went on a rampage and killed her trainer James O'Rourke. After terrorizing the town for a couple of hours, she ran off to Cherry Creek, north of Valdosta. Gypsy was chased by Police Chief Calvin Dampier and a posse. Gypsy was killed by a shot from a Krag-Jørgensen rifle and buried on site; James O'Rourke was buried in Sunset Hill Cemetery in Valdosta.[12][13]

A major incident of racial unrest in Lowndes County occurred May 1918. Sidney Johnson, a black man and farm worker who felt that he had been mistreated repeatedly by his white farmer boss Hampton Smith, murdered Smith by gun shot and injured his wife. Subsequently, this sparked a lynch mob to be formed in Valdosta, which lasted from May 17 to May 24. It resulted in the lynchings of a least 13 African Americans, including pregnant twenty-one-year-old Mary Turner. Sidney Johnson was apprehended during a shoot out on 22 May 1918 in a house on South Troupe Street in Valdosta. Following his death, a crowd of over 700, castrated him and then dragged his body down Patterson Street and taken all the way to Morven, Georgia. Following the violence over 500 African Americans fled from Lowndes County and Brooks County in fear. The lynching spree of May 1918 in Lowndes County was part of a large trend of organized violence towards African Americans after War World One that culminated in Red Summer (1919). By 1922 local chapters of the Ku Klux Klan were holding rallies openly in Valdosta.[14] 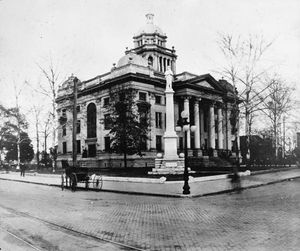 The Old Lowndes County Courthouse as it appeared around the early 1900s.

The county's former courthouse was built around 1905 and is listed on the National Register of Historic Places and was the county's seventh courthouse. The first courthouse was built in 1828 at Franklinville, the original county seat. In 1834 another courthouse was built at the new county seat of Troupville. It was replaced by a new courthouse in 1842. The 1842 structure was destroyed by a fire set by William B. Crawford in June 1858. The first courthouse at Valdosta was built in the 1860s and was a wooden structure that burned down in 1869. Another wooden structure was rebuilt in its place. It too was replaced in 1875 by a new two-story brick building. In 1900, county commissioners decided that a larger structure was needed and in 1905, the seventh courthouse was built. It is the structure that is locally referred to as the old courthouse. In August and September 2010, the county government moved to a brand new judicial complex.[15] The Lowndes County Courthouse is widely acknowledged as one of the most beautiful county courthouses in Georgia. It is a historical site for many to visit and view. The courthouse is also useful for meeting, public display, and other attractions. Today it is used for many events, meetings and political purposes.[16][17]

Valdosta was once the center of long-staple cotton growing in the United States until the boll weevil finally killed the crop in 1917 and agriculture turned to tobacco and pine timber.

The Valdosta Daily Times has twice reported that the world's second Coca-Cola bottling plant was at one time located in Valdosta.[18][19]

The local economy received an important boost when Interstate 75 was routed and built through the area. Many vacationers on their way to Florida found Valdosta a convenient "last stop" on their way to Walt Disney World and the Orlando area, especially those coming from the Midwest and Ontario, Canada.[citation needed]

According to the Bureau of Labor Statistics' Monthly Labor Review, the first automated teller machine (ATM) was installed at C&S Bank in Valdosta.[20]

Valdosta is about 230 miles (370 km) south of Atlanta.[25] It is almost the same distance north of Orlando, Florida. Valdosta is approximately fifteen miles north of the state's border with Florida. Valdosta is located in the coastal plain of Georgia and thus has a virtually flat landscape. Highways stretch for miles with hardly a curve, rise, or fall. The sixty miles (97 km) of railway between Valdosta and Waycross were once the longest straight stretch of railroad in the world.[26][unreliable source?]

Valdosta has a humid subtropical climate (Köppen climate classification Cfa), with mild, wet winters and hot, humid summers.[27] Temperatures frequently go over 90 degrees, but in extreme heatwaves, temperatures occasionally go over 100. Snowfall is rare but not unknown. Snow has not been sighted in Valdosta since February 2010, with the last significant snowfall being 1989. However, light frosts regularly occur between December and February.[28] Valdosta can experience Indian summers in the winter, where temperatures can get quite warm. Very rarely do winter lows go below 25 degrees Fahrenheit.

According to the Bureau of Census, the Valdosta, Georgia Metropolitan Statistical Area (MSA) had an estimated population of 135,804 and ranked #281 in the U.S. in 2009. (The MSA consisists of Lowndes, Brooks, Lanier and Echols counties.) 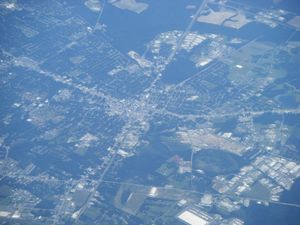 Located in the far southern portion of the state, near the Florida line along the Interstate 75 corridor, it is a commercial center of South Georgia with numerous manufacturing plants. The surrounding area produces tobacco, naval stores, particularly turpentine, as well as pine lumber, and pulpwood. According to the Georgia Department of Community Affairs, Valdosta is called the "Naval Stores Capital of the World" because it supplies 80% of the world demand for naval stores.[35][36]

In the retailing field, Valdosta has one major regional mall, Valdosta Mall, which features national chain anchor stores like JCPenney, Sears, Buckle (store), Office Depot, PetSmart, Belk, Old Navy, and Ross Stores. Several large stores surround the mall or are near the mall including Best Buy, Home Depot, Kohl's, Lowe's, Office Max and Target. Valdosta has other notable shopping areas such as the Historic Downtown area with many local businesses,[37] and the Five Points area which has a Big Lots, Winn-Dixie, and numerous national franchise and local restaurants.

Moody Air Force Base is located about 9 miles (14 km) north of Valdosta in northern Lowndes County.

The Valdosta City School District holds grades pre-school to grade twelve, consisting of five elementary schools, two middle schools, and a high school. The school district serves the city of Valdosta and the surrounding communities of Lowndes County.[38] The district has 447 full-time teachers and over 7,178 students.[39]

The Lowndes County School District holds grades pre-school to grade twelve, consisting of seven elementary schools, three middle schools, and a high school. The school district serves communities of Lowndes County outside of Valdosta.[40] The district has 592 full-time teachers and over 9,245 students.[41] 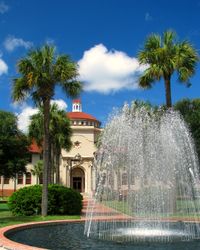 Valdosta is also the home of Valdosta State University[43] (VSU), founded in 1906 as South Georgia State Normal College for Women. It became part of the University System of Georgia in 1950 as Valdosta State College. Valdosta State College achieved university status and became VSU in 1993 and is one of two regional universities in Georgia. VSU has seen substantial growth in the past decade and currently has an enrollment of over 13,000 students. VSU is also the site of the Georgia Governor's Honors Program (GHP), a yearly four-week gathering of meritorious high school students in subjects ranging from standard academic subjects (i.e. math, languages, social studies, etc.) to broader intellectual enterprises (i.e. dance, theater, agricultural sciences.)

An extension of Georgia Military College[44] is in the city limits, and Wiregrass Georgia Technical College[45] is located a mile outside of the city limits off of Interstate 75.

The Valdosta Regional Airport, three miles south of Valdosta, is serviced by Delta Air Lines to Hartsfield-Jackson Atlanta International Airport and Atlantic Southeast Airlines as a Delta Connection. There is also a Greyhound bus station.

In 1898, the Valdosta Street Railway Company secured the right to operate street cars on Patterson, Ashley, Toombs, Lee, Hill, Central, Crane and Gordon Streets. Valdosta was one of the smallest cities in America to have a street railway system. The streetcar operated in the downtown area between 1899 and 1924. The abandoned tracks were removed in the 1940s to be used as scrap metal for the war effort.[47]

The Lowndes County Historical Society & Museum is located at the Carnegie Library of Valdosta, a National Register of Historic Places listed building and Carnegie library,[48] one of 24 Carnegie Libraries in Georgia.

The first baseball team at Valdosta State was formed in 1954 and had its first official season of intercollegiate competition in 1955. Tommy Thomas, became coach in 1967 and served as coach until 2007. Under Thomas the Blazers saw 34 winning seasons, two conference titles, three Divisional titles, eight trips to the national tournament, and a Division II national championship in 1979. Thomas is the all-time wins leader in NCAA Division II baseball with 1302 wins. Greg Guilliams became VSU's head baseball coach in 2008 and won a Gulf South Conference East Division title in his first year and led Valdosta State to its first postseason appearance in seven years.[56]

In 1915 the Newark Peppers of the now defunct Federal League held spring training in Valdosta.[57]

Valdosta hosted several different minor league baseball teams during the twentieth century, and was one of six cities in the Georgia State League which began play in 1906, with the team known as the Valdosta Stars.[58][59] From 1946-1958, the Valdosta Tigers were a "Class-D" minor league team. Valdosta was also home to the Valdosta Trojans which was a "farm" team for the Brooklyn Dodgers.

TitleTown USA was a month-long segment on ESPN that started in the spring of 2008 and continued through July. Fans nominated towns and cities across the country based on their championship pedigree. A panel reviewed the nominees and fan voting in May determined the 20th finalist. SportsCenter visited each city in July, and fan voting July 23–27 determined the winner.

Due to the Valdosta High School football team's record as well as multiple championships in many sports by Valdosta State University, Lowndes High School, Valwood School, Georgia Christian School, and other academic institutions in the town, Valdosta was nominated as a finalist in 2008 for ESPN's "Titletown USA" contest. On July 28, 2008, with 29.2% of fan votes on ESPN's website poll, Valdosta was named TitleTown USA.[60]