From Infogalactic: the planetary knowledge core
Jump to: navigation, search
This article is about the street circuit. For Circuit de Valencia, the permanent racing circuit in the same area, see Circuit Ricardo Tormo. 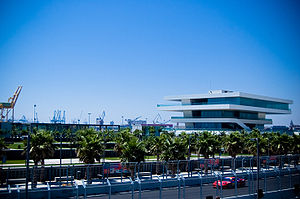 The Valencia Street Circuit (Valencian: Circuit Urbà de València, Spanish: Circuito Urbano de Valencia) was a street circuit in Valencia, Spain which hosted the Formula One European Grand Prix for five years (2008–2012).[2][3] The first race meeting on the circuit was held over the 23/24 August 2008 weekend,[4] with Felipe Massa winning the main event, the European Grand Prix, after starting from pole position. The circuit uses the roads skirting the city's harbour and America's Cup port area[5] – including a section over a 140-metre-long (460 ft) swing bridge,[1] and also includes some roads designed exclusively for racing purposes by the German architect Hermann Tilke, who also designed the infrastructure buildings for the circuit. The 2012 edition took place on 24 June[6][7] and was the last to go under the name of the European Grand Prix. It has not been used since 2013 after a deal fell through to alternate this venue with Catalunya in Barcelona to host the Spanish Grand Prix.[8]

The deal to host the Valencia race was signed on June 1, 2007, and is for seven years.[9] The deal was made between Formula One supremo Bernie Ecclestone and the Valmor Sport group, which is led by former motorcycle rider Jorge Martinez Aspar and Villarreal football club's president Fernando Roig. This deal goes back on comments made by Ecclestone previously stating that no European country should hold more than one race each year as Barcelona currently holds the Spanish Grand Prix each year.

Although now confirmed, the deal was rumored to be conditional on the People's Party winning regional elections on 27 May 2007.[10] However, Ecclestone had clarified his comments on May 16, 2007: "I said I wouldn't formalise a contract until after the elections because I didn't know who I would be signing it with." He said his statements were taken out of context.[11] Ecclestone has since been cleared of influencing the election by the Valencian Electoral Commission.[12]

The official track layout was unveiled by Valencia councillor and transport counselor, Mario Flores, on 19 July 2007. The track was first used in the last weekend of July 2008, as the circuit hosted a round of the Spanish F3 Championship and International GT Open. It was first used for the European Grand Prix on August 24, 2008. On January 2013, it was reported that the Valencia street circuit is abandoned. Thieves have stripped the track of anything of value and the track resembles a ghost town.[13]

The track was 5.419 kilometres (3.367 mi) long and incorporated a total of 25 turns – 11 right-handers and 14 left-handers.[14] It was estimated that the track had a top speed of around 323 kilometres per hour (201 mph),[15] with a lap record of 1:38.683, held by Timo Glock, which he set during the 2009 European Grand Prix. Valencia was not as tight as Circuit de Monaco but overtaking opportunities were still scarce, due to the straights not being straight and the dust off line. Nico Hülkenberg noticed quite a bit of space for a street circuit and some corners have a lot of run-off area. Robert Kubica suggested that good traction and good braking stability were crucial to win at this circuit because there were a lot of long straight lines ending with heavy braking.[5]

The circuit had been criticised by the drivers for its lack of overtaking opportunities. Changes in Formula One in 2011, including the introduction of the Drag reduction system and the switch to Pirelli tyres, partially improved that with 27 passes recorded in that year's race, 22 of which were accredited to the assistance of DRS.[16] However, the five 'normal' overtakes still represented the year's second lowest total, although the adoption of two DRS zones for that year's race limited the potential for non-DRS assisted passes. Despite this, the 2012 race was shown to have many different overtakes and became one of the most thrilling races of the season.[citation needed] It also had many more retirements - a total in four in 2012 compared to 0 retirements during the 2011 race.

The pit straight is short and immediately leads into the flat-out turn 1 before cars heavily brake down to 60mph for the right-left complex of turns 2 and 3, passing the Grau Metro station.[17] A curved 'straight' leads into a left-right chicane; turns 4 and 5, by the Neptune Hotel. Drivers exit the 85 mph chicane by running very close to the wall, before sweeping through the kinks of turns 6 and 7, then braking heavily for the following swing bridge section. One of the slowest corners on the track, turn 8, with an apex speed of around 55 mph, leads drivers over the bridge before immediately braking again into the equally slow turn 10.[18] Good traction is important out of here as the following section is a DRS zone with a top speed along the kinked 'straight' of around 200 mph, with a heavy braking zone for the 90 mph turn 12/13 chicane; a second gear, right-left complex. Turn 14 is a medium speed right-hander before another, shorter DRS zone that leads through two left-hand kinks before the turn 17 hairpin at Museu de les Ciències Príncipe Felipe. Right-handed and a good spot for overtaking, turn 17 is taken at about 60 mph. A series of flat-out, or near flat-out sweeping curves follow, with the right-handers of turns 19 and 20 the most challenging of the bunch. Turn 25 is a hairpin, taken at about 60 mph; the run to the line following this left-hander is fairly short but requires good traction and acceleration for the best lap time.