From Infogalactic: the planetary knowledge core
Jump to: navigation, search
"Valerianus" redirects here. For other uses, see Valerianus (disambiguation).
Not to be confused with Valerian II.

Valerian (/vəˈlɪəriən/; Latin: Publius Licinius Valerianus Augustus;[1] 193/195/200 – 260 or 264, also known as Valerian the Elder, was Roman Emperor from 253 to 260 AD. He was taken captive by Sassanian Persian king Shapur I after the Battle of Edessa, becoming the only Roman Emperor who was captured as a prisoner of war, causing instability in the Empire.

Origins and rise to power

File:089 Mariniana.jpg
Coin of Egnatia Mariniana, wife of Valerian and mother of Gallienus.

Unlike many of the ephemeral emperors and rebels who bid for Imperial Power during the Crisis of the Third Century of the Roman Empire, Valerian was of a noble and traditional senatorial family. Details of his early life are elusive, but for his marriage to Egnatia Mariniana, who gave him two sons: later emperor Publius Licinius Egnatius Gallienus and Valerianus Minor.[2]

He was Consul for the first time either before 238 AD as a Suffectus or in 238 as an Ordinarius. In 238 he was princeps senatus, and Gordian I negotiated through him for Senatorial acknowledgement for his claim as emperor. In 251 AD, when Decius revived the censorship with legislative and executive powers so extensive that it practically embraced the civil authority of the emperor, Valerian was chosen censor by the Senate, though he declined to accept the post. During the reign of the Decius he was left in charge of affairs in Rome when that prince left for his ill-fated last campaign in Illyricum.[3] Under Trebonianus Gallus he was appointed dux of an army probably drawn from the garrisons of the German provinces which seems to have been ultimately intended for use in a war against the Persians.[4] However, when Trebonianus Gallus had to deal with the rebellion of Aemilianus in 253 AD it was to Valerian he turned for assistance in crushing the attempted usurpation. Valerian headed south but was too late: Gallus was killed by his own troops, who joined Aemilianus before Valerian arrived. The Raetian soldiers then proclaimed Valerian emperor and continued their march towards Rome. Upon his arrival in late September, Aemilianus's legions defected, killing Aemilianus and proclaiming Valerian emperor. In Rome, the Senate quickly acknowledged Valerian, not only for fear of reprisals but also because he was one of their own.

File:Shapur victory.JPG
A bas relief of Emperor Valerian standing at the background and held captive by Shapur I found at Naqsh-e Rustam, Shiraz, Iran. The kneeling man is probably Philip the Arab.

Valerian's first act as emperor on 22 October 253 was to make his son Gallienus his Caesar and colleague. Early in his reign, affairs in Europe went from bad to worse, and the whole West fell into disorder. In the East, Antioch had fallen into the hands of a Sassanid vassal and Armenia was occupied by Shapur I (Sapor). Valerian and Gallienus split the problems of the empire between them, with the son taking the West, and the father heading East to face the Persian threat.

In 254, 255, and 257, Valerian again became Consul Ordinarius. By 257, he had recovered Antioch and returned the province of Syria to Roman control. The following year, the Goths ravaged Asia Minor. In 259, Valerian moved on to Edessa, but an outbreak of plague killed a critical number of legionaries, weakening the Roman position, and the town was besieged by the Persians. At the beginning of 260, Valerian was decisively defeated in the Battle of Edessa, and he arranged a meeting with Shapur to negotiate a peace settlement. The truce was betrayed by Shapur, who seized Valerian and held him prisoner for the remainder of his life. Valerian's capture was a tremendous defeat for the Romans.[5]

See also Persecution of Christians in the Roman Empire#Under Valerian

Valerian, while fighting the Persians, sent two letters to the Senate, ordering steps to be taken against Christians. The first, sent in 257, commanded Christian clergy to perform sacrifices to the Roman gods or face banishment. The second, the following year, ordered Christian leaders to be executed, Roman senators and knights who were Christians to perform acts of worship to the Roman gods or lose their titles, their property and if they continued to refuse, also to be executed, Roman matrons who would not apostatize to lose their property and be banished, and civil servants and members of the Imperial household who would not worship the Roman gods to be reduced to slavery and sent to work on the Imperial estates.[6] This shows that Christians were prevalent at this time in very high positions. Among the prominent Christians executed as a result of their refusal to perform acts of worship to the Roman gods as ordered by Valerian were Cyprian, bishop of Carthage, Pope Sixtus II, bishop of Rome along with six deacons and Lawrence of Rome. When Valerian's son Gallienus became Emperor in 260, the legislation was rescinded.[7]

Eutropius, writing between 364–378 AD, stated that Valerianus "was overthrown by Shapur king of Persia, and being soon after made prisoner, grew old in ignominious slavery among the Parthians.".[8] An early Christian source, Lactantius, thought to be virulently anti-Persian, thanks to the occasional persecution of Christians by some Sasanian monarchs,[9] maintained that for some time prior to his death Valerian was subjected to the greatest insults by his captors, such as being used as a human footstool by Shapur when mounting his horse. According to this version of events, after a long period of such treatment Valerian offered Shapur a huge ransom for his release. In reply, according to one version, Shapur was said to have forced Valerian to swallow molten gold (the other version of his death is almost the same but it says that Valerian was killed by being flayed alive) and then had the unfortunate Valerian skinned and his skin stuffed with straw and preserved as a trophy in the main Persian temple. It was further alleged that it was only after a later Persian defeat against Rome that his skin was given a cremation and burial.[10] The captivity and death of Valerian has been frequently debated by historians without any definitive conclusion.[9] 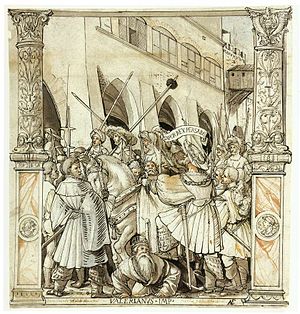 The Humiliation of Emperor Valerian by Shapur I, pen and ink, Hans Holbein the Younger, ca. 1521

One modern scholar[9] claims that, contrary to the account of Lactantius, Shapur I sent Valerian and some of his army to the city of Bishapur or Gundishapur where they lived in relatively good condition. Shapur used the remaining soldiers in engineering and development plans. Band-e Kaisar (Caesar's dam) is one of the remnants of Roman engineering located near the ancient city of Susa.[11] In all the stone carvings on Naghshe-Rostam, in Iran, Valerian is represented holding hands with Shapur I, a sign of submission.

It has been alleged that the account of Lactantius is colored by his desire to establish that persecutors of the Christians died fitting deaths;[12] the story was repeated then and later by authors in the Roman Near East fiercely hostile to Persia.[13]

The joint rule of Valerian and Gallienus was threatened several times by usurpers. Nevertheless, Gallienus secured the throne until his own assassination in 268 AD.

He also appears in Anthony Hecht's book of poetry, The Hard Hours in the poem, "Behold the Lilies of the Field".