Brigadier Arthur Valerian Wellesley, 8th Duke of Wellington, KG, LVO, OBE, MC (2 July 1915 – 31 December 2014), styled Marquess of Douro between 1943 and 1972, was a senior British peer and a brigadier in the British Army. His main residence was Stratfield Saye House in Hampshire.

Wellington was born in Rome, Italy, on 2 July 1915, the son of Gerald Wellesley, 7th Duke of Wellington, and Dorothy Violet, daughter of Robert Ashton. He was known by the courtesy title Marquess of Douro from 1943 when his father succeeded in the dukedom on the death of his nephew. He attended Eton before going up to New College, Oxford.[1] 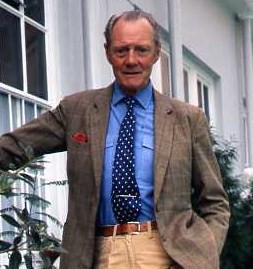 Wellington was commissioned a second lieutenant in the Territorial Army in 1936,[2] and was commissioned with the same rank (on probation) in the British Army Reserve in 1939.[3] In 1940, he was given a full commission as a second lieutenant in the Royal Horse Guards Regiment, with the service number 68268.[4] He served in the Second World War with the 1st Household Cavalry Regiment in the Middle East and Italy,[5][6] during which time he was awarded the Military Cross,[7] and promoted to the war substantive rank of captain.[8] Following the war, the 1st Household Cavalry Regiment disbanded,[9] and he returned to Royal Horse Guards, where he was promoted to lieutenant in 1946,[8] and advanced to the rank of captain on later in that year.[10] He received successive promotions to major in 1951,[11] and to lieutenant colonel in 1954,[12] rising to command of his regiment.[6] Seeing service in Cyprus between 1956 and 1958,[6] he was appointed an Officer of the Order of the British Empire in 1958.[13]

He then moved to the Household Cavalry Regiment, which he began commanding in 1959.[6] Promoted to colonel in 1960,[14] he commanded the 22nd Armoured Brigade (1960–1961), served as Commander, Royal Armoured Corps in the I(BR) Corps of the British Army of the Rhine, and became defence attaché to Spain in 1964.[6] He retired from the Army in 1968 and was granted the honorary rank of brigadier.[15]

Wellington was involved in business as a Director of Massey Ferguson Holdings Ltd from 1967 to 1989 and of Motor Iberica SA (Spain) from 1967 to 1999. He was appointed a Deputy Lieutenant of Hampshire on 18 April 1975.[1][18] Through his final year, the Duke continued to conduct public engagements, most recently at the Order of the Garter investiture, 16 June 2014.[19]

Wellington died peacefully at his home, Stratfield Saye Estate, near Basingstoke, on New Year's Eve 2014, six months before the 200th anniversary of the Battle of Waterloo, and seven months before his 100th birthday.[20][21][5]

Wellington was twice engaged to Lady Rose Paget, the daughter of Charles Paget, 6th Marquess of Anglesey, who eventually married the Hon. John Francis McLaren. On 28 January 1944 he married Diana Ruth McConnel (1922–2010), only daughter of Major-General Douglas McConnel CB, CBE, of Knockdolian, Colmonell, Ayr, at St. George's Cathedral in Jerusalem. With Diana, he had five children:

Wellington was the elder brother of the socialite Lady Elizabeth Clyde and the uncle of the actor and musician Jeremy Clyde.

Apart from his British titles, Wellington held the hereditary titles of 8th Prince of Waterloo (Prins van Waterloo) of the Kingdom of the Netherlands, and Duke of the Victory (Duque da Vitória) of the former Kingdom of Portugal, with its subsidiary titles Marquis of Torres Vedras (Marquês de Torres Vedras) and Count of Vimeiro (Conde de Vimeiro).

He was the 9th Duke of Ciudad Rodrigo (Duque de Ciudad Rodrigo) of the Kingdom of Spain, but on 10 March 2010 he ceded the Spanish Dukedom to his eldest child, Charles Wellesley, Marquess of Douro. In accordance with Spanish procedure, Lord Douro petitioned formal claim to the title with the Spanish authorities.[22] King Juan Carlos of Spain, through his Minister, granted the succession of the dukedom to Douro on 21 May 2010.[23] 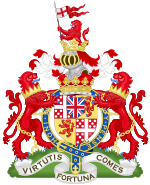 Arms of the Duke

On 26 December 1941, as Second Lieutenant Wellesley, Wellesley was awarded the Military Cross[7] "in recognition of distinguished services in the Middle East (including Egypt, East Africa, The Western Desert, The Sudan, Greece, Crete, Syria and Tobruk) during the period February, 1941, to July, 1941."[1][24]

Wellington was appointed a Member (Fourth Class) of the Royal Victorian Order (MVO) on 15 March 1952.[25] Membership (Fourth Class) was redesignated Lieutenant in 1984, thus adjusting his post-nominal letters to LVO. He was made an Officer (Military) of the Order of the British Empire (OBE) on 7 February 1958 "in recognition of distinguished services in Cyprus for the period 1st July to 31st December, 1957".[26]

Wellesley has been elected a Fellow of King's College London (FKC).