Valide sultan (Ottoman Turkish: والده سلطان‎) was the title held by the "legal mother" of a ruling Sultan of the Ottoman Empire. The title was first used in the 16th century for Hafsa Sultan, consort of Selim I and mother of Suleiman the Magnificent, superseding the previous title of mehd-i ülya ("cradle of the great").[1] Normally, this title was held by the living mother of a reigning sultan. The mothers who died before their sons' accession to the throne were never bestowed with the title of valide sultan. In special cases, there were grandmothers and stepmothers of a reigning sultan who assumed the title valide sultan.

The word valide (والده) literally means "mother" in Ottoman Turkish. The Turkish pronunciation of the word valide is [vaː.liˈde].

Sultan (سلطان) is an Arabic word originally meaning "authority" or "dominion". By the beginning of the 16th century, this title, carried by both men and women of the Ottoman dynasty, was replacing other titles by which prominent members of the imperial family had been known (notably hatun for women and bey for men). Consequently, the title valide hatun (title for living mother of reigning Ottoman sultan before 16th century) also turned into valide sultan. This usage underlines the Ottoman conception of sovereign power as family prerogative.

Western tradition knows the Ottoman ruler as "sultan", but the Ottomans themselves used "padişah" (emperor) or "hünkar" to refer to their ruler. The emperor’s formal title consisted of "sultan" together with "khan" (for example, Sultan Suleiman Khan). In formal address, the sultan’s children were also entitled "sultan", with imperial princes (şehzade) carrying the title before their given name, with imperial princesses carrying it after. Example, Şehzade Sultan Mehmed and Mihrimah Sultan, son and daughter of Suleiman the Magnificent. Like imperial princesses, the living mother and main consort of reigning sultans also carried the title after their given names, for example, Hafsa Sultan, Suleiman’s mother and first valide sultan, and Hürrem Sultan, Suleiman’s chief consort and first haseki sultan. The evolving usage of this title reflected power shifts among imperial women, especially between Sultanate of Women, as the position of main consort eroded over the course of 17th century, the main consort lost the title "sultan", which replaced by "kadin", a title related to the earlier "khatun". Henceforth, the mother of the reigning sultan was the only person of non imperial blood to carry the title "sultan".[2]

Title valide carried before or after given name. According to a genealogical website, the formal way of addressing a valide is Devletlû İsmetlu (given name) Vâlide Sultân Aliyyetü'ş-Şân Hazretleri.[3] Many westerner often translated their official title, sultan, to title which not exist in Ottoman royalti officially, sultana, possibly for distinguished them from Ottoman ruler and other male member of Ottoman dynasty. 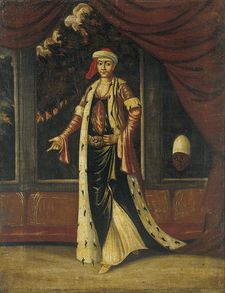 An Eighteenth Century painting of a Valide Sultan by Jean Baptiste Vanmour.

Valide sultan was perhaps the most important position in the Ottoman Empire after the sultan himself. As the mother to the sultan, by Islamic tradition ("A mother's right is God's right"),[4] the valide sultan would have a significant influence on the affairs of the empire. She had great power in the court and her own rooms (always adjacent to her son's) and state staff.[1] Valide sultan also traditionally had access to considerable economic resources and often funded major architectural projects. In particular during the 17th century, in a period known as the "Sultanate of Women", a series of incompetent or child sultans raised the role of the valide sultan to new heights.[5]

The most powerful and well-known of all valide sultans in the history of the Ottoman Empire were Nurbanu Sultan, Safiye Sultan, Kösem Sultan and Turhan Hatice Sultan.

Most harem women who were slaves were never formally married to the sultans. Nevertheless, their children were considered fully legitimate under Islamic law if recognized by the father.[6]

Normally, living mother of reigning sultan held title Valide Sultan. But in exceptional cases, there were women who didn't hold this title when their sons became Sultan. 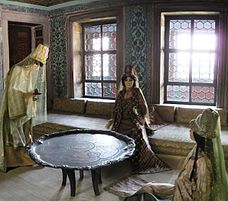 Reconstructed scene of a Valide Sultan and her attendants in her apartments at Topkapı Palace.