The Valladolid debate (1550–1551) was the first moral debate in European history to discuss the rights and treatment of a colonized people by colonizers. Held in the Colegio de San Gregorio, in the Spanish city of Valladolid, it was a moral and theological debate about the colonization of the Americas, its justification for the conversion to Catholicism and more specifically about the relations between the European settlers and the natives of the New World. It consisted of a number of opposing views about the way natives were to be integrated into colonial life, their conversion to Christianity and their rights and obligations.

A controversial theologist, Dominican friar and Bishop of Chiapas Bartolomé de las Casas argued that the Amerindians were free men in the natural order despite their practice of human sacrifices and other such customs, deserving the same consideration as the colonizers.[1] Opposing this view were a number of scholars and priests incluing humanist scholar Juan Ginés de Sepúlveda, who argued that the human sacrifice of innocents, cannibalism, and other such "crimes against nature" were unacceptable and should be suppressed by any means possible including war.[2]

Although both sides claimed to have won the disputation, there is no clear record supporting either interpretation. The affair is considered one of the earliest examples of moral debates about colonialism, human rights of colonized peoples and international relations in history. In Spain, it served to establish de las Casas as the primary, though controversial defender of the Indians.[3] He and others contributed to the passing of the New Laws of 1542, which limited the encomienda system further.[4] Though they did not fully reverse the situation, the laws achieved considerable improvement in the treatment of Indians and consolidated their rights granted by earlier laws.[4] More importantly, the debate reflected a concern for morality and justice in 16th century Spain, that only surfaced in other colonial powers centuries later. 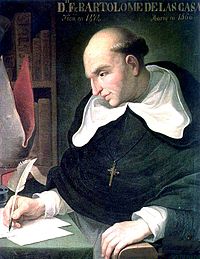 Spain's colonization and conquest of the Americas inspired an intellectual debate especially regarding the compulsory Christianization of the Indians. Bartolomé de las Casas, a Dominican friar from the School of Salamanca and member of the growing Christian Humanist movement, worked for years to oppose forced conversions and to expose the treatment of natives in the encomiendas.[citation needed] His efforts influenced the passage of the Laws of Burgos of 1512 (which ordered encomenderos to preach Christianity to their Indian workers) and the papal bull Sublimis Deus of 1537 (which established the status of the Indians as rational beings).[citation needed] More significantly, Las Casas was instrumental in the passage of the New Laws (the Laws of the Indies) of 1542, which were designed to end the encomienda system.[4]

Moved by Las Casas and others, in 1550 the King of Spain Charles V ordered further military expansion to cease until the issue was investigated.[4][5] The King assembled a Junta (Jury) of eminent doctors and theologians to hear both sides and to issue a ruling on the controversy.[1] Las Casas represented one side of the debate. His position found some support from the monarchy, which wanted to control the power of the encomenderos, and within the Catholic Church.[citation needed] Representing the other side was Juan Ginés de Sepúlveda, whose arguments supported the interests of the colonists and landowners who benefited from the system.[4] 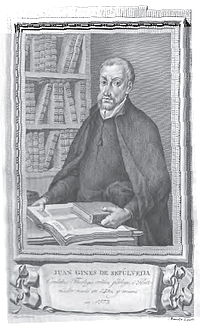 Juan Ginés de Sepúlveda, supporter of the war "jousts" against the Indians

Though Las Casas tried to bolster his position by recounting his experiences with the encomienda system's mistreatment of the Indians, the debate remained on largely theoretical grounds.[citation needed] Sepúlveda took a more secular approach than Las Casas, basing his arguments largely on Aristotle and the Humanist tradition to assert the Indians were naturally predisposed to slavery, and could be subjected to bondage or war if necessary.[1] Las Casas objected, arguing that Aristotle's definition of the "barbarian" and the natural slave did not apply to the Indians, who were fully capable of reason and should be brought to Christianity without force or coercion.[4]

Sepúlveda put forward many of the arguments from his Latin dialogue "Democrates Secundus sive de justi belli causis",[6] to assert that the barbaric traditions of the Indians justified waging war against them. The Spaniards, according to Sepúlveda, were entitled to punish other peoples for performing such vicious practices as idolatry, sodomy, and cannibalism. Wars had to be waged "in order to uproot crimes that offend nature".[7] This was an obligation to which every Spaniard, whether secular or religious, had to conform.[citation needed]

Sepúlveda issued four main justifications for enslaving Indians. First, their natural condition deemed them fit for slavery, and it was the responsibility of the Spaniards to act as masters. Second, Spaniards were entitled to prevent Indians from engaging in cannibalism as they saw fit. Third, the same went for Indians who sacrificed innocents to their Gods. Fourth, slavery was an effective method of converting Indians to Christianity.[8] He drew on Aristotle's theory of natural slavery and the Humanist tradition to argue that the Indians were predisposed to slavery, and could be subjected to bondage or war if need be.[1] 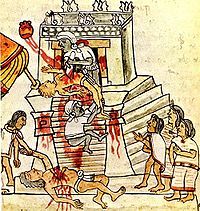 Mendoza Codex showing in the same drawing the kind of arguments used by both sides, advanced architecture versus brutal killings

Las Casas was prepared for part of his opponent's discourse, since he, upon hearing about the existence of Sepúlveda's Democrates Secundus, had written in the late 1540s his own Latin work, the "Apologia", which aimed at debunking his opponent's theological arguments that Aristotle's definition of the "barbarian" and the natural slave did not apply to the Indians, who were fully capable of reason and should be brought to Christianity without force.[9][10]

Las Casas pointed out that every individual was obliged by international law to prevent the innocent from being treated unjustly. He also cited Saint Augustine and Saint John Chrysostom, both of whom had opposed the use of force to punish crimes against nature. Human sacrifice was wrong, but it would be better to avoid war by any means possible. The Indians had to be converted to Christianity non-forcefully.[11]

The arguments presented by Las Casas and Sepúlveda to the junta of Valladolid remained too abstract, with both sides stubbornly clinging to their opposite theories that ironically relied on similar, if not the same, theoretical authorities, which were interpreted to suit their respective arguments.[12]

In the end, both parties declared that they had won the debate, but neither received the desired outcome. Las Casas saw no end to Spanish wars of conquest in the New World, and Sepúlveda did not see the New Laws' restricting the power of the encomienda system overturned. The debate cemented Las Casas's position as the lead defender of the Indians in the Spanish Empire,[3] and further weakened the encomienda system. However, it did not substantially alter Spanish treatment of the Indians.[4]

In 1992 the Valladolid debate became an inspiration source for Jean-Claude Carier who published the novel "La Controverse de Valladolid" ("Dispute in Valladolid"). The novel was filmed for television under the same name. The director — Jean-Danielle Veren, Jean-Pierre Marielle played Las Kasas, Jean-Louis Trintignant acted as Sepúlveda.