From Infogalactic: the planetary knowledge core
Jump to: navigation, search
This article is about the physical-geographic term. For places named "Valley", see Valley (disambiguation). 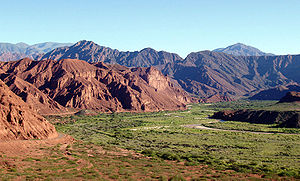 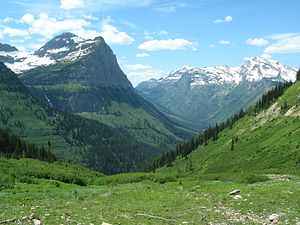 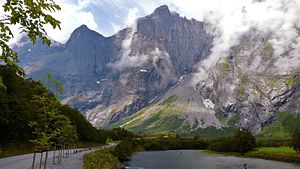 Romsdalen in Western Norway is an almost vertical valley. 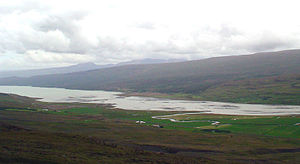 Fljótsdalur in East Iceland, a rather flat valley (in Scotland, this type of valley is called a "strath")

A valley is a low area between hills, often with a river running through it. 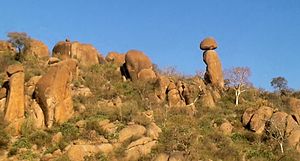 The Valley of Marvels in Babille, Ethiopia.

In geology, a valley or dale is a depression that is longer than it is wide. The terms U-shaped and V-shaped are descriptive terms of geography to characterize the form of valleys. Most valleys belong to one of these two main types or a mixture of them, (at least) with respect of the cross section of the slopes or hillsides.

A valley in its broadest geographic sense is also known as a dale. A valley through which a river runs may also be referred to as a vale. A small, secluded, and often wooded valley is known as a dell or in Scotland as a glen. A wide, flat valley through which a river runs is known in Scotland as a strath. A mountain cove is a small valley, closed at one or both ends, in the central or southern Appalachian Mountains which sometimes results from the erosion of a geologic window. A small valley surrounded by mountains or ridges is sometimes known as a hollow. A deep, narrow valley is known as a cwm (also spelled combe or coombe). Similar geological structures, such as canyons, ravines, gorges, gullies, and kloofs, are not usually referred to as valleys. See also: "chine". A valley formed by erosion is called an erosional valley; a valley formed by geologic events such as drop faults or the rise of highlands is called a structural valley.[1]

A valley formed by flowing water, or river valley, is usually V-shaped. The exact shape will depend on the characteristics of the stream flowing through it. Rivers with steep gradients, as in mountain ranges, produce steep walls and a bottom. Shallower slopes may produce broader and gentler valleys. However, in the lowest stretch of a river, where it approaches its base level, it begins to deposit sediment and the valley bottom becomes a floodplain.

Some broad V examples are:

Some of the first human complex societies originated in river valleys, such as that of the Nile, Tigris-Euphrates, Indus, Ganges, Yangtze, Huang He, Mississippi, and arguably Amazon. In prehistory, the rivers were used as a source of fresh water and food (fish and game), as well as a place to wash and a sewer. The proximity of water moderated temperature extremes and provided a source for irrigation, stimulating the development of agriculture. Most of the first civilizations developed from these river valley communities.

In geography, a vale is a wide river valley, usually with a particularly wide flood plain or flat valley bottom.

In Southern England, vales commonly occur between the escarpment slopes of pairs of chalk formations, where the chalk dome has been eroded, exposing less resistant underlying rock, usually claystone. 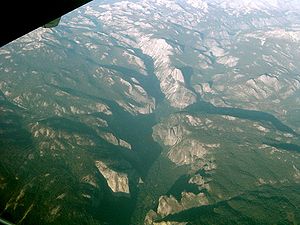 Yosemite Valley from an airplane 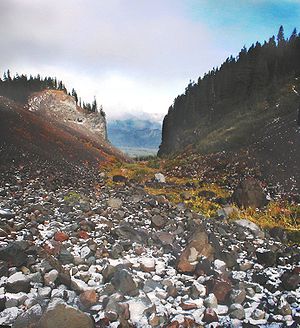 A glaciated valley in the Mount Hood Wilderness showing a characteristic U-shape, the bottom's rocky 'rubble' accretion and the broad shoulders

There are various forms of valley associated with glaciation that may be referred to as glacial valleys.

A valley carved by glaciers is normally U-shaped. The valley becomes visible upon the recession of the glacier that forms it. When the ice recedes or thaws, the valley remains, often littered with small boulders that were transported within the ice. Floor gradient does not affect the valley's shape, it is the glacier's size that does. Continuously flowing glaciers – especially in the ice age – and large-sized glaciers carve wide, deep incised valleys.

Examples of U-shaped valleys are found in every mountainous region that has experienced glaciation, usually during the Pleistocene ice ages. Most present U-shaped valleys started as V-shaped before glaciation. The glaciers carved it out wider and deeper, simultaneously changing the shape. This proceeds through the glacial erosion processes of glaciation and abrasion, which results in large rocky material (glacial till) being carried in the glacier. A material called boulder clay is deposited on the floor of the valley. As the ice melts and retreats, the valley is left with very steep sides and a wide, flat floor. A river or stream may remain in the valley. This replaces the original stream or river and is known as a misfit stream because it is smaller than one would expect given the size of its valley.

Other interesting glacially carved valleys include:

A tunnel valley is a large, long, U-shaped valley originally cut under the glacial ice near the margin of continental ice sheets such as that now covering Antarctica and formerly covering portions of all continents during past glacial ages.[1]

Tunnel valleys were formed by subglacial erosion by water. They served as subglacial drainage pathways carrying large volumes of melt water. Their cross-sections exhibit steep-sided flanks similar to fjord walls, and their flat bottoms are typical of subglacial glacial erosion.

In northern Central Europe, the Scandinavian ice sheet during the various ice ages advanced slightly uphill against the lie of the land. As a result, its meltwaters flowed parallel to the ice margin to reach the North Sea basin, forming huge, flat valleys known as Urstromtäler. Unlike the other forms of glacial valley, these were formed by glacial meltwaters.

Look from Paria View to a valley in Bryce Canyon, Utah, with very striking shoulders

Depending on the topography, the rock types and the climate, a lot of transitional forms between V-, U- and plain valleys exist. Their bottoms can be broad or narrow, but characteristic is also the type of valley shoulder. The broader a mountain valley, the lower its shoulders are located in most cases. An important exception are canyons where the shoulder almost is near the top of the valley's slope. In the Alps – e.g. the Tyrolean Inn valley – the shoulders are quite low (100–200 meters above the bottom). Many villages are located here (esp. at the sunny side) because the climate is very mild: even in winter when the valley's floor is completely filled with fog, these villages are in sunshine.

In some stress-tectonic regions of the Rockies or the Alps (e.g. Salzburg) the side valleys are parallel to each other, and additionally they are hanging. The brooks flow into the river in form of deep canyons or waterfalls. Usually this fact is the result of a violent erosion of the former valley shoulders. A special genesis we find also at arêtes and glacial cirques, at every Scottish glen, or a northern fjord. 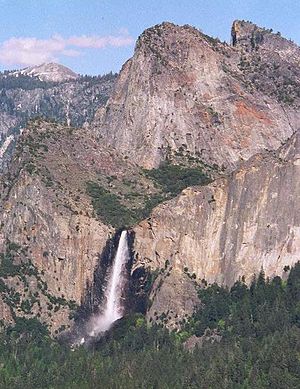 A hanging valley is a tributary valley that is higher than the main valley. They are most commonly associated with U-shaped valleys when a tributary glacier flows into a glacier of larger volume. The main glacier erodes a deep U-shaped valley with nearly vertical sides while the tributary glacier, with a smaller volume of ice, makes a shallower U-shaped valley. Since the surfaces of the glaciers were originally at the same elevation, the shallower valley appears to be 'hanging' above the main valley. Often, waterfalls form at or near the outlet of the upper valley.[2]

Usually the bottom of a main valley is broad – independent of the U or V shape. It typically ranges from about one to ten kilometers in width and is commonly filled with mountain sediments. The shape of the floor can be rather horizontal, similar to a flat cylinder, or terraced.

Side valleys are rather V than U-shaped; near the mouth waterfalls are possible if it is a hanging valley. The location of the villages depends on the across-valley profile, on climate and local traditions, and on the danger of avalanches or landslides. Predominant are places on terraces or alluvial fans if they exist.

Historic siting of villages within the mainstem valleys, however, have chiefly considered the potential of flooding. 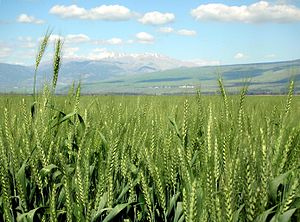 Wheat in the Hula Valley, Israel

A hollow (holler) is a small valley or dry stream bed. This term is commonly used in New England, Appalachia, Ozarks, Arkansas and Missouri to describe such geographic features. In rural areas, it may be pronounced as "holler". Hollows may be formed by river valleys, such as Mansfield Hollow, or they may be relatively dry clefts with a notch-like characteristic in that they have a height of land and consequent water divide in their bases. 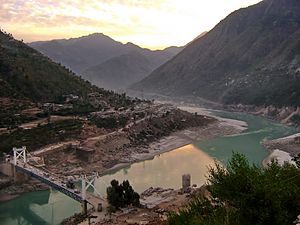 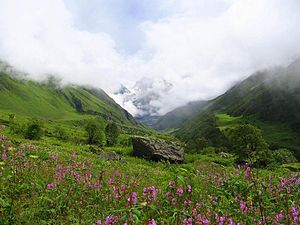 The Valley of Flowers in Uttarakhand, India 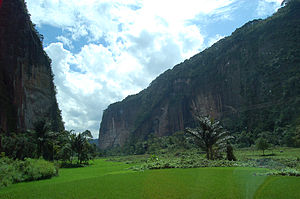 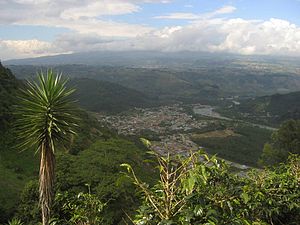 A view of Orosí, Costa Rica The Gudbrand Valley in Eastern Norway near Gålå

Rift valleys, such as the Albertine Rift, are formed by the expansion of the Earth's crust due to tectonic activity beneath the Earth's surface.