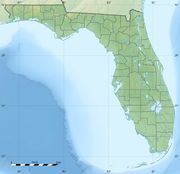 The Valspar Championship is a men's professional golf tournament on the PGA Tour, and is played annually on the Copperhead Course at Innisbrook Resort and Golf Club in Palm Harbor, Florida.

From 2003 to 2006, the Tampa Bay event had a slot in the schedule to itself as the last full-field event before the Tour Championship. The Chrysler Corporation was the title sponsor.

Since 2007, the Tampa Bay event has been played in March. For a time the tournament was without a title sponsor, leading to speculation on its fate beyond 2007. Then, on January 24, 2007, tournament officials and the PGA Tour announced a six-year sponsorship agreement with the PODS of Clearwater, Florida.[2] However, the company chose to exercise an option to withdraw as title sponsor after the 2008 event, and tournament officials searched to find a replacement.[3] On June 4, 2008, Transitions Optical, Inc., the photochromic lens manufacturer headquartered locally in Largo, Florida, was announced as the new title sponsor.[4] Transitions left the event after the 2012 season. Just two weeks before the 2013 tournament, EverBank agreed to be presenting sponsor for the tournament.[5] In September 2013, Valspar Corporation signed a four-year deal to become title sponsor of the event, now named the Valspar Championship.[6] On March 9, 2016, the PGA Tour, Valspar Corporation, and Copperhead Charities – the Valspar Championship host organization – announced a three-year title sponsorship extension, thus carrying Valspar’s commitment to the tournament through 2020. This extension occurred in the midst of the original contract period, which was from 2013 to 2017.[7]