Valtteri Bottas (Finnish pronunciation: [ˈʋɑltːeɾi ˈbotːɑs]; born 28 August 1989) is a Finnish racing driver currently competing in Formula One with Williams Martini Racing. He currently resides in Monaco. His current best career achievement was in 2014 when he finished 4th in the Formula One World Championship. 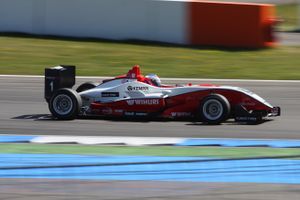 Bottas competing at the second round of the 2010 Formula 3 Euro Series at Hockenheim.

Bottas would have also won the 2007 Formula Renault UK Winter Series, had he been holding an MSA-registered licence for the championship. This did however not stop him from competing, and he won three out of the four races in the championship.

He moved up into the Formula Three Euroseries for the 2009 season, competing for reigning champions ART Grand Prix. Despite not winning a race, Bottas set two pole positions on his way to third in the championship, edging out Alexander Sims at the final race. In June 2009, Bottas won the 2009 Masters of Formula 3, also claiming the pole position and setting the fastest lap of the race. By winning the event again in 2010, he became the first driver to win the F3 Masters title for the second time.[2]

In 2010 Bottas was assigned test driver for the Williams Formula One team[3] and would continue as such for the 2011 and 2012 (where he took part in 15 Friday Free Practice sessions)[4] seasons, during which he also contested the GP3 Series, remaining with F3 squad ART.[5] After a tough start to the season, he claimed a win in each of the last four race weekends and secured the title by winning the penultimate race ahead of his team-mate James Calado.[6] 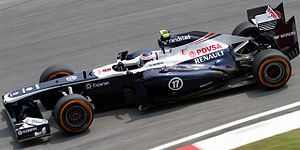 Bottas during practice at the 2013 Malaysian Grand Prix.

Bottas returned to racing in 2013, as he was confirmed as teammate to Pastor Maldonado at Williams for the 2013 season on 28 November 2012.[7] On 8 June 2013, Bottas qualified in 3rd position at the Canadian Grand Prix behind Sebastian Vettel (1st), and Lewis Hamilton (2nd).[8] He scored his first points finish at the United States Grand Prix by finishing 8th. This result allowed Bottas to finish ahead of Maldonado in the Drivers' Championship. 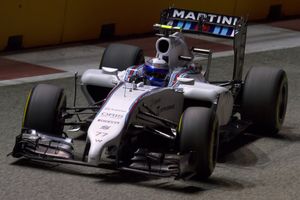 Bottas at the 2014 Singapore Grand Prix

On 11 November 2013 Bottas was confirmed to continue with Williams in 2014 alongside Felipe Massa, who was signed from Ferrari to replace Pastor Maldonado.[9] At the first race of the 2014 season in Australia, Bottas qualified 10th and finished 6th, after recovering from a crash earlier in the race. He was later promoted to 5th after Daniel Ricciardo was disqualified from 2nd position.[10] At the Austrian Grand Prix, Bottas qualified 2nd, his best grid position in Formula One, and achieved his first podium in the sport, finishing third behind Nico Rosberg (1st) and Lewis Hamilton (2nd).[11] Despite qualifying 14th on the grid at the British Grand Prix, Bottas charged through the field to finish second, following Rosberg's retirement from the race, thereby achieving his second consecutive career podium. At the German Grand Prix, he qualified second and ended the race in the same position despite a late challenge from Hamilton. After achieving three more podiums in Belgium, Russia (where he set his first fastest lap of a race) and Abu Dhabi (part of Williams' first double podium since the 2005 Monaco Grand Prix), Bottas finished 4th overall in the championship, beating the likes of former world champions Sebastian Vettel and Fernando Alonso. 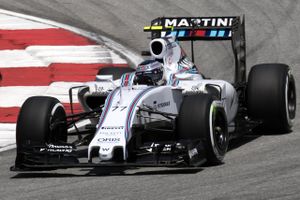 Bottas at the 2015 Malaysian Grand Prix

In September 2014, it was announced that Bottas and Massa would retain their drives with Williams for the 2015 season.[12] At the opening race of the season in Australia, Bottas qualified sixth for the race, but injured his back during qualifying. He was taken to The Alfred Hospital for precautionary checks,[13] where he was diagnosed with soft tissue damage to his lower back, and was not medically cleared to race.[14] Both Bottas' and Williams' season didn't live up to their hopes. Williams lost out in the development war to Ferrari over the winter and slipped further behind Mercedes. Bottas achieved two podium finishes across the 2015 season. The first of which came at the Canadian Grand Prix when Kimi Räikönen's Ferrari experienced an engine mapping issue resulting in him spinning, leaving an easy podium opportunity for the Williams driver. The second podium of the season came in Mexico behind the Mercedes duo. Two races earlier, Bottas was on course to finish third in Russia before Räikkönen collided with him while trying overtake on the final lap of the race. Sergio Pérez was rewarded with the podium, while Räikkönen was penalised, dropping him to 8th and Bottas retired. Bottas finished fifth in the Drivers' Championship beating his experienced team mate Felipe Massa for the second consecutive year.[15]

* Season still in progress.
† – As Bottas was a guest driver, he was ineligible for points.

† Driver did not finish the race, but was classified as he completed over 90% of the race distance.

* Season still in progress.
† Driver failed to finish the race, but was classified as they had completed more than 90% of the race distance.