From Infogalactic: the planetary knowledge core
Jump to: navigation, search
This article is about the Short-Season A minor league baseball team. For the Triple-A team formerly located in Vancouver, see Sacramento River Cats. 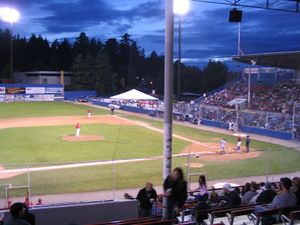 The Vancouver Canadians are a minor league baseball team located in Vancouver, British Columbia. The Canadians are the Northwest League affiliate of the Toronto Blue Jays. The C's have previously affiliated with the Oakland Athletics between 2000–2010. They are the only Canadian team in the "affiliated" minor leagues—i.e., part of the farm system of a Major League Baseball team. This came about after the Ottawa Lynx moved to Allentown, Pennsylvania. The NWL Canadians supplanted a Triple-A franchise of the same name that played for 22 seasons (1978–99) in the Pacific Coast League. The current incarnation of the Canadians was established in 2000 after the AAA Canadians moved to Sacramento, California and became the Sacramento River Cats (which is now an affiliate of the San Francisco Giants).

Vancouver was a heavy player in the early history of the Northwest League, a charter member in every version of the league that would eventually form the NWL, notably as the sole team that survived the collapse of the Western International League in 1922 when it reformed in 1937, winning four pennants in the WIL (1942, 1947, 1949, 1954) as the Vancouver Capilanos (1939–1954). However, even though they were the final champions of the WIL, Vancouver was not part of its reformation into the Northwest League, due to the NWL's shedding of all of its Canadian teams in order to focus on the American Pacific Northwest. Vancouver was without professional baseball in 1955, but in 1956 the highest calibre of minor league play, in the form of the Open-Classification Pacific Coast League, came to British Columbia when Oakland Oaks transferred there as the Vancouver Mounties. The Mounties played in the PCL from 1956 through 1962, and from 1965 through 1969.

A Triple-A franchise named the Vancouver Canadians played for 22 seasons (1978–99) in the Pacific Coast League at Nat Bailey Stadium. Following the 1999 season, in which they won the Triple-A World Series, the team was purchased by a group led by Art Savage and moved to Sacramento, California for the 2000 season and became the Sacramento River Cats.

The Canadians announced January 10, 2007 that Rick Magnante would return as Manager for 2007, as well as pitching coach Craig Lefferts, who entered his 4th season as the pitching coach. Former Vancouver Canadian slugger Chris Pritchett was named the team's latest hitting coach in May 2007.

The Canadians announced that former Washington Nationals executive Andy Dunn would become the President and General Manager of the Canadians, on January 7, 2008.

In the fall of 2010, the Canadians became the Short Season A affiliate of the Toronto Blue Jays. This helped see the team's attendance rise to 162,162 for the season, a team record. In September 2011, the Vancouver Canadians won their first Northwest League Championship title, defeating the Tri-City Dust Devils 9-2 to win the final series 2-1. The following year, the Vancouver Canadians became back-to-back champions for the first time in franchise history, defeating the Boise Hawks 12-9 to win the final series 2-1.

On January 25, 2013, the Blue Jays announced that the player development contract with the Canadians had been extended to include the 2016 season.[1]

In August 2013, outfielder Kevin Pillar became the first alumnus of the team to play in the major leagues for Toronto.[2]

On September 9, 2013 the Canadians became just the third Northwest League team to win three straight championships, defeating the Boise Hawks 5-0 at Scotiabank Field at Nat Bailey Stadium to win the final series 2-1 in front of a sold out crowd.[3]

The 2013 season also saw the Vancouver Canadians draw over 195,000 fans to Scotiabank Field, a fifth consecutive team record which included 23 sold out games.

On November 4, 2013, the Vancouver Canadians were named the 2013 recipient of the John H. Johnson President’s Trophy. The prestigious award is given to minor-league baseball’s top organization. It was the first time that a Canadian-based franchise won minor league baseball's most prized award.[4]