The first European sighting[3] of these ranges was likely Sir Francis Drake. A sighting of land on June 5, 1579 was recorded by his crew aboard the vessel Golden Hind at a latitude of 48 degrees north but not finding safe harbour, they moved on southward. The highest peak of the Vancouver Island Ranges, the Golden Hinde is named for his vessel.

The first European explorer likely to have observed any of the mountains of the Vancouver Island Ranges would have been Captain Juan José Pérez aboard the Spanish frigate Santiago. Although he anchored off Estevan Point, on August 8, 1774 he did not land. Captain James Cook entered Nootka Sound March 29, 1778 and spent about a month refitting his ships Discovery and Resolution. His logs contain the first recorded reference to the mountains of Vancouver Island. In 1788 British Captain John Meares began a small settlement at Nootka Sound and the following year, the Spanish built a permanent fort at Friendly Cove (Yuquot) in Nuu-chah-nulth territory. The Spanish claimed sovereignty and a dispute arose which was resolved with the Nootka Convention of the 1794. There was little further exploration until the Hudson's Bay Company was granted rights to Vancouver Island on January 13, 1849 leading to the first attempt, by Captain Hamilton Moffat in 1852 to ascend a major peak on the Island when he attempted Rugged Mountain.

Adam Grant Horne located a trail across the island from the Qualicum River to the Alberni Inlet in 1856 and Joseph Despard Pemberton, Surveyor General of the Colony of Vancouver Island explored much of the southern half of the Island in 1857. The southern Island was further explored by the Vancouver Island Exploring Expedition in 1865. By the mid-1880s the southern half of the island had been explored and by 1890 the northern region had been explored as well. The central part of the island, the area now within Strathcona Provincial Park, was explored by Reverend William Washington Bolton, Headmaster of the Victoria School for Boys, in 1894 and 1896. 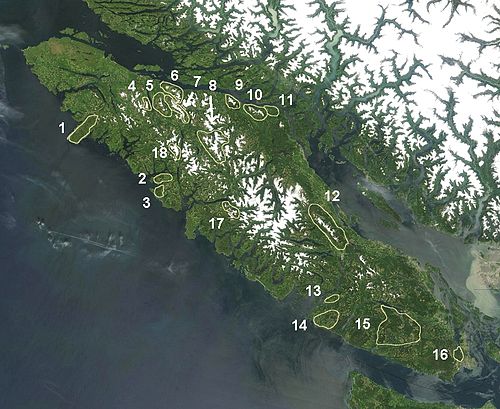 Only a few of the many subranges of the Vancouver Island Ranges have official names. These are:

The Elk River Mountains, located in Strathcona Provincial Park, are considered a range by some sources.[4]

Peaks of the Vancouver Island Ranges