From Infogalactic: the planetary knowledge core
(Redirected from Vannetais)
Jump to: navigation, search
"Gwened" and "Vannetais" redirect here. For the medieval region of Brittany, see Bro Gwened. For the regional Breton dialect, see Gwenedeg.
Not to be confused with Vennes or Gwynedd.

Vannes (French pronunciation: ​[van]; Breton: Gwened) is a commune in the Morbihan department in Brittany in north-western France. It was founded over 2000 years ago.[1]

Vannes is located on the Gulf of Morbihan at the mouth of two rivers, the Marle and the Vincin. It is around 100 kilometres (62 miles) northwest of Nantes and 450 km (280 mi) south west of Paris. Vannes is a market town and often linked to the sea.

The name Vannes comes from the Veneti, a seafaring Celtic people who lived in the south-western part of Armorica in Gaul before the Roman invasions. For several Millennia they conducted a cross channel trade, probably using hide boats and perhaps Ferriby Boats.[2] Wheat that apparently was grown in the Middle East was part of this trade.[3] At about 150 BC the evidence of trade (such as Gallo-Belgic coins) with the Thames estuary area of Great Britain dramatically increased.[4]

The Veneti were defeated by Julius Caesar's fleet in 56 BC in front of Locmariaquer; many of the Veneti were then either slaughtered or sold into slavery. The Romans settled a town called Darioritum in a location previously belonging to the Veneti. From the 5th to the 7th century, the remaining Gauls were displaced or assimilated by waves of immigrant Britons fleeing the Saxon invasions of Britain. Under the Breton name Gwened (also derived from the Veneti), the town was the center of an independent principality or kingdom variously called Bro-Wened ("Vannes") or Bro-Ereg ("land of Gwereg"), the latter for a prominent member of its dynasty, which claimed descent from Caradog Strongarm. The diocese of Vannes was erected in the 5th century. The Council of Vannes was held there in 461. The realm annexed Cornouaille for a time in the early 6th century but was permanently joined with Domnonia under its king and saint Judicaël around 635.

In 1342, Vannes was besieged four times between forces from both sides of the Breton War of Succession. The city's defending commander, Olivier de Clisson IV was captured by the English, but finally released. The French eventually executed him on suspicion that the ransom was unusually low and therefore he may have been a traitor.

In 1759 Vannes was used as the staging point for a planned French invasion of Britain. A large army was assembled there, but it was never able to sail following the French naval defeat at the Battle of Quiberon Bay in November 1759.

In 1795, during the French Revolution, French forces based in Vannes successfully repelled a planned British-Royalist invasion.

Inhabitants of Vannes are called Vannetais.

The municipality launched a linguistic plan through Ya d'ar brezhoneg on 12 October 2007.

Train
The Gare de Vannes railway station offers connections to Quimper, Rennes, Nantes, Paris and several regional destinations.
With the fast train TGV, the journey takes:
– 30 minutes to Lorient,
– 1 hour to Nantes or Rennes,
– 3.5 to 4 hours to Paris.
The Transport express régional or TRE is a slower train to join railway stations in the close neighborhood, as Auray or Questembert.
There is no direct railway from Vannes to Saint-Brieuc (118 km away in the north of Brittany), so the train from Vannes to Saint Brieuc goes via Rennes, which doubles the travel time and cost: it takes 2 to 3 hours to go from Vannes to Saint Brieuc by train.

Car
Two highways, in the north of Vannes, provide fast connections by car:
– N165: drive west to Lorient (58 km) and Quimper (122 km), south east to Nantes (111 km)
– N166: drive north east to Rennes (113 km)
+ a network of small roads connects Vannes to smaller cities. There is no highway from Vannes to Saint-Brieuc, so the way to northern Brittany consists of small roads. The lack of highway or railway between Vannes and Saint-Brieuc (118 km north) cuts the communications between northern and southern Brittany, and limits Brittany economic performance.

Airplanes
Vannes has a small airfield in the village of Monterblanc, called Vannes-Meucon airport, or "Vannes – Golfe du Morbihan airport". It used to be a military airport, but it is now dedicated to general aviation aircraft. It belongs to Vannes Agglomeration community, the group of cities gathered around Vannes, and the main users of this airfield are Vannes flying club, the local ultralight aviation club, and Vannes school of skydiving.

Bus
There are 2 bus networks in Vannes: – Kicéo, proposes short travels starting from Vannes Place de la Republique on behalf of Vannes Agglomeration community,
– CAT, propose longer travel starting from the railway station on behalf of Morbihan.
So there are 2 central bus stations in Vannes: one on Place de la Libération, the other at the railway station.

Bike
Vannes city has a public bicycle rental program, called Velocea based on the same idea as the Paris Vélib'. Hundreds of bicycles are available in 20 automated rental stations each with 10 to fifteen bikes/spaces. Each Velocea service station is equipped with an automatic rental terminal and stands for bicycles. The bicycles are robust and heavy 18 kilograms (40 lb), and the user can take a bike in any station, and let it in any station, for a cost as: free the first 4 hours, 1 euro the next 30 minutes, 2 euros per hour. 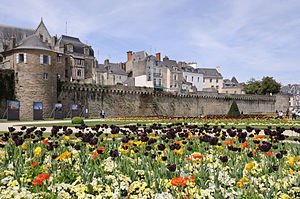 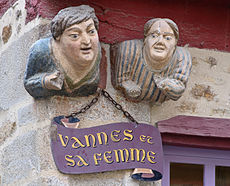 "Vannes and his wife"

Vannes was the birthplace of:

Panorama of the old town

Vannes is twinned with:

Vannes also has partnerships (‘partenariats’) with: