Toulon is the largest city and administrative capital of Var. Other important towns in Var include Fréjus, Saint-Raphaël, Draguignan, Brignoles, Hyères and La Seyne-sur-Mer. Var is known for the harbour of Toulon, the main port of the French Navy, for its seaside resorts, the most famous of which is Saint-Tropez, for some fine examples of Romanesque and medieval architecture, such as Le Thoronet Abbey and the Fréjus Cathedral, for its wines, particularly the wines of Bandol, as well as for its motorsport race track Circuit Paul Ricard, located in Le Castellet.

The department of Var was created at the time of the French Revolution, on 4 March 1790, from a portion of the former royal province of Provence. Its capital was originally Toulon, but this was moved to Grasse in 1793 to punish the Toulonnais for yielding the town to the British in 1793. Subsequently, the capital was moved to Brignoles in 1795, then to Draguignan in 1797. It was not returned to Toulon until 1974.

In 1815, following the defeat of Napoleon at Waterloo the department was occupied by Austrian troops until November 1818. In 1854 the first railroad reached Toulon.

In 1884 a cholera epidemic struck Toulon. The leader of the fight against the epidemic was Georges Clemenceau, a doctor and a member of the National Assembly for the Seine department. He was later elected a member of the Chamber of Deputies for the Var department from 1888 to 1893 and Senator from 1902 to 1920, during which time he also served as Prime Minister of France.

The First World War (1914–1918) stimulated growth in shipyards and military industries in the region, but weakened the agricultural and food industries. In 1942 the German Army moved from Occupied France into the zone libre, which included the Var department. The French Fleet was sabotaged in Toulon Harbour to keep it from falling into German hands. The Maquis Vallier, a group of maquis resistance fighters, was active. On 15 August 1944 American and Free French forces land at Saint-Tropez, Sainte-Maxime and Saint-Raphaël. The Free French fleet arrived at Toulon on 13 September.

In the 1960s about one hundred thousand French citizens were repatriated from Algeria following the Algerian War of Independence and settled in the Var department. In 2014, Fréjus Mayor David Rachline became the first Senator for Var elected under the National Front banner; alongside Stéphane Ravier for Bouches-du-Rhône, the two became the first National Front Senators under the Fifth Republic.

The department of Var has a surface area of 6,032 km2, and 420 km of coastline, including the offshore islands. 56% of it is covered with forest. Its geological formations are divided into two regions; one composed of limestone to the northwest of a line between Toulon and Draguignan and of crystalline rock (quartz) to the southeast.

The department is in the foothills of the French Alps and largely mountainous. Major mountains include:

The plateau of Canjuers (French: Plan de Canjuers) in the northeast of Var gradually rises from 500 to 1,000 metres. In the south and west there are several plateaus, such as the plateau of Siou Blanc to the north of Toulon, which rise from 400 to 700 metres in altitude. 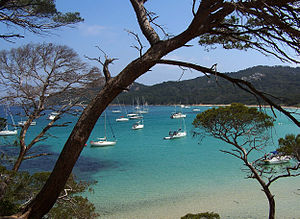 The department of Var has a Mediterranean climate, slightly warmer, drier and sunnier than Nice and the Alpes-Maritimes, but is also less sheltered from the wind. Toulon has an average of 2899.3 hours of sunshine each year.[1] The average maximum daily temperature in August is 29.1 °C, and the average daily minimum temperature in January is 5.8 °C.[1] The average annual rainfall is 665 mm.[1] Winds exceeding 16 m/s (57.6 km/h) blow an average of 116 days per year in Toulon,[1] compared with 77 days per year at Fréjus further east.[2]

The population of other important towns, according to the 2004–2005 estimate:

Members of the National Assembly

Var elected the following members of the National Assembly during the 2017 legislative election:

The principal industry of Var is tourism, thanks largely to the big summer influx of tourists to the Mediterranean coastal towns, and to the Verdon River Canyon and hilltop villages of Var. 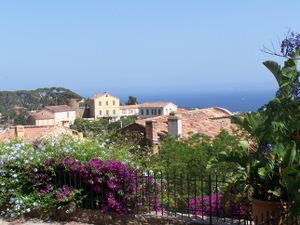 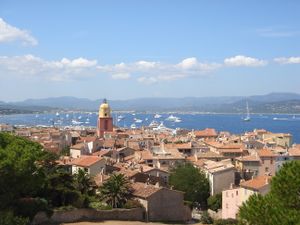 Popular tourist attractions in Var include:

The construction industry employs 28,000 workers in the Var of which 4,000 work alone and 4,500 companies employ the remaining 24,000 salaried workers. Industry generates an annual turnover of €2.5 billion. Of this, €500 million is derived from public works.[5]

800 km2 or 13% of the total area is dedicated to agriculture, on which 40,000 people (14% of the Var working population) depend for their livelihoods. The department also has 10 km2 of horticultural land (of which 4 km2 are covered). Var is France's largest grower of cut flowers, producing some 500 million stems a year. Livestock farming is mainly sheep (50,000) and goats (4,200). Vines and viticultural related activities account for 345 km2 of farmland. The 450 domaines or coopératives and the 4 AOCs (appellation d'origine contrôlée) produce 150 million litres of wine a year. Var leads the world in the production of rose wine.

Other important agricultural products include olives (cultivated on 42 km2 of land—a quarter of all French olive groves—and processed in 40 mills), figs (the Var produces 80% of France's figs), and honey (800 tonnes per year). There are also 9 km2 of market gardens.

Agricultural turnover in Var is €610 million per year, of which 45% is sales of wines and 42% of horticultural products.[6]

In 2008 the Var department received approximately €15 million in farm subsidies under the EU Common Agriculture Policy, an average of about €6,000 per recipient farm. This compares with an average across France as a whole of over €18,000 per farm.[7]