From Infogalactic: the planetary knowledge core
Jump to: navigation, search
Not to be confused with Baradero or Honda Varadero.

Varadero (Spanish pronunciation: [baɾaˈðeɾo]) is a resort town in the province of Matanzas, Cuba, and one of the largest resort areas in the Caribbean.

It is situated on the Hicacos Peninsula, between the Bay of Cárdenas and the Straits of Florida, some 140 km east of Havana, at the eastern end of the Via Blanca highway. The peninsula is only 1.2 km wide at its widest point and is separated from the island of Cuba by the Kawama Channel. This spit of land however extends more than 20 kilometers from the mainland in a northeasterly direction and its tip, Punta Hicacos, is the northernmost point of the island of Cuba. At the northeastern end of the peninsula there is a nature reserve with virgin forests and beaches. The Hicacos Point Natural Park is a 3.12 km2 (1.20 sq mi) ecological preserve established in 1974. It contains the 250 m (820 ft) long Cave of Ambrosio, Mangón Lake (home to 31 species of birds and 24 species of reptiles) and the ruins of the La Calavera (The Skull) Salt Works (one of the first salt works to be constructed by the Spanish in the New World).[3] The cays developed off shore, such as Cayo Piedras and Cayo Cruz del Padre are the westernmost part of the Sabana-Camaguey Archipelago.

Juan Gualberto Gómez Airport, situated west of the peninsula, is Varadero's airport. It is the second-most-important airport of the island after José Martí Airport in Havana, and serves international and domestic flights.

The first mention of Varadero was in 1555.[4] The place was first used as a dry dock (Spanish: varadero) and the salt mines of the peninsula (closed in 1961) supplied most of the Spanish Latin America Fleet since 1587. However, the foundation date of Varadero as city was only on December 5, 1887, when ten families from the city of Cárdenas obtained a permission to build their vacation homes between today's 42nd and 48th Street.

It was established as municipality (Spanish: municipio) at the administrative re-distribution of July 3, 1976[5] from territories previously part of Cárdenas. In August 2010, the Varadero municipality was abolished according to a Law approved by the Cuban National Assembly, becoming again part of the Cárdenas municipality. 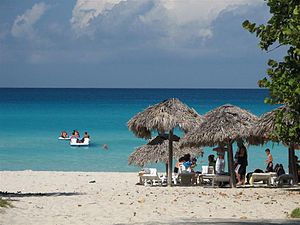 Varadero is foremost a tourist resort town, boasting more than 20 km of white sandy beaches. The first tourists visited Varadero as early as the 1870s, and for years it was considered an elite resort. In 1910 the annual rowing regatta was started; five years later the first hotel, named Varadero and later Club Nautico, was built. Tourism grew in the early 1930s as Irénée du Pont, an American millionaire, built his estate on the peninsula. Many famous and infamous people stayed in Varadero, for example Al Capone.[6]

After the Cuban Revolution in 1959, many mansions were expropriated from their rich owners. These mansions soon became museums.[citation needed] As a symbol of the new integrated tourism for Cubans and foreign visitors of all social classes, the Park of the 8000 Cubicles (Parque de las 8000 Taquillas) was built in 1960. Visitors could leave their belongings in the basement of the park, had access to sanitary installations and gastronomic services on the first floor, and could rent bathing articles and swimsuits. The surroundings of the park became the center of the city. Between the 1960s and 1980s Varadero transformed itself into a cultural centre. During those years the central park (8000 Taquillas) (located between 44th and 46th Street) saw countless concerts, festivals and sporting events.[7]

The 1990s brought the start of another hotel building campaign, mostly in the 4-star and 5-star segment. Many of the hotels are operated or co-owned by foreign businesses like Melia, Barcelo, TRYP, etc. (France's Club Med used to have a property but has since left Varadero.) As international tourism was opened up, the local population expanded with the arrival of people, some in key economic positions, from other parts of Cuba. As a consequence, Varadero has lost much of its social and cultural life and its traditions. The central park, the cinema and various cultural meeting places were neglected in favor of a hotel-centred all-inclusive-tourism and finally closed. The International Carnival, an initiative of Cubans and foreigners started in the 1980s, also ceased.

In addition to its most valued resource, the beach, Varadero has natural attractions such as caves and a chain of easily accessed virgin cays. There are also cultural, historical and environmental attractions in the vicinity, such as the cities of Matanzas and Cárdenas, the Zapata Peninsula and the resort of San Miguel de los Baños. Varadero, which is a free port, also possesses facilities for scuba diving, deep-sea fishing, yachting and other water sports.

Varadero is primarily visited by European and Canadian tourists. The number of U.S. tourists visiting Varadero, although increasing, has been limited because of the U.S. government restrictions that make it difficult for U.S. citizens to visit Cuba as tourists.

In 2007, the municipality of Varadero had a population of about 20,000 between the Hicacos peninsula (7,000) and the two incorporated localities of Santa Marta and Boca de Camarioca.[8] With a total area of 32 km2 (12 sq mi),[1] it has a population density of 771.3/km2 (1,998/sq mi). Starting from January 2011, the Varadero municipality was abolished and incorporated into the neighbor municipality of Cardenas. Therefore, Varadero is now only acknowledged as the region in the Hicacos peninsula, properly the beach area. Many of the workers in the tourist sector commute in from Cardenas.