Variety is a weekly American entertainment trade magazine owned by Penske Media Corporation. It was founded by Sime Silverman in New York in 1905 as a weekly; in 1933 it added Daily Variety, based in Los Angeles, to cover the motion-picture industry; in 1998 it brought out Daily Variety Gotham, based in New York. Variety.com is a free website that features breaking entertainment news, reviews, box office results, cover stories, videos, photo galleries and more, plus a credits database, production charts and calendar, with archive content dating back to 1905. The last daily printed edition was put out on March 19, 2013. Variety magazine originally reported on theater and vaudeville.

Variety has been published since December 16, 1905,[1][2] when it was launched by Sime Silverman as a weekly periodical covering vaudeville with its headquarters in New York City.

On January 19, 1907, Variety published what is considered the first film review in history.[citation needed]

In 1933, Sime Silverman launched Daily Variety, based in Hollywood.[citation needed]

Sime Silverman had passed on the editorship of the Weekly Variety to Abel Green as his replacement in 1931; he remained as publisher until his death in 1933 soon after launching the Daily. His son Sidne Silverman (1901–1950), known as "Skigie", succeeded him as publisher of both publications. Both Sidne and his wife, stage actress Marie Saxon (1905–1942), died of tuberculosis. Their only son Syd Silverman, born 1932, was the sole heir to what was then Variety Inc. Young Syd's legal guardian Harold Erichs oversaw Variety Inc. until 1956. After that date Syd Silverman was publisher of both the Weekly Variety in New York and the Daily Variety in Hollywood, until the sale of both papers in 1987 to the Cahners Corp. In L.A. the Daily was edited by Tom Pryor from 1959 until 1988.

For twenty years its editor-in-chief was Peter Bart, originally only of the weekly New York edition, with Michael Silverman (Syd's son) running the Daily in Hollywood. Bart had worked previously at Paramount Pictures and The New York Times. In April 2009, Bart moved to the position of "vice president and editorial director", characterised online as "Boffo No More: Bart Up and Out at Variety". From mid 2009 to 2013, Timothy M. Gray oversaw the publication as Editor-in-Chief,[3] after over 30 years of various reporter and editor positions in the newsroom.[4]

In March 2013, Variety owner Jay Penske appointed three co-editors to oversee different parts of the publication's industry coverage; Claudia Eller as Editor, Film; Cynthia Littleton as Editor, TV and Andrew Wallenstein as Editor, Digital. In October 2014, Eller and Wallenstein were upped to Co-Editors in Chief, with Littleton continuing to oversee the trade's television coverage. In June 2014, Penske Media Corporation (PMC) entered into an agreement with Reuters to syndicate news from Variety and Variety Latino-Powered by Univision to distribute leading entertainment news to the international news agency's global readership. This dissemination comes in the form of columns, news stories, images, video, and data-focused products. In July 2015, Variety was awarded a Los Angeles Area Emmy Award by the Television Academy in the Best Entertainment Program category for Variety Studio: Actors on Actors, a series of one-hour specials that take viewers inside Hollywood films and television programs through conversations with acclaimed actors.

Cahner's Publishing purchased Variety from the Silverman family in 1987.[5]

On December 7, 1988, Bart's predecessor, Roger Watkins, proposed and oversaw the transition to four-color print. Upon its launch, the new-look Variety measured one inch shorter with a washed-out color on the front. The old front-page box advertisement was replaced by a strip advertisement, along with the first photos published in Variety since Sime gave up using them in the old format in 1920: they depicted Sime, Abel and Syd.[6]

In October 2012, Reed Business Information, the periodical's owner, (formerly known as Reed-Elsevier, which had been parent to Cahner's Corp. in the United States) sold the publication to Penske Media Corporation.[7][8] PMC is the owner of Deadline.com, which since the 2007–2008 Writers Guild of America strike has been considered Variety's largest competitor in online showbiz news. In October, 2012, Jay Penske announced that the website's paywall would come down, the print publication would stay, and he would invest more into Variety's digital platform in a townhall.[9]

A significant portion of the publication's advertising revenue comes during the movie-award season leading up to the Academy Awards. During this "Awards Season", large numbers of colorful, full-page "For Your Consideration" advertisements inflate the size of Variety to double or triple its usual page count. These advertisements are the studios' attempt to reach other Hollywood professionals who will be voting on the many awards given out in the early part of the year, including the Academy Awards, the Golden Globes and various guild award honors.[citation needed]

For much of its existence, Variety's writers and columnists have used a jargon called slanguage or varietyese (a form of headlinese) that refers especially to the movie industry, and has largely been adopted and imitated by other writers in the industry. Such terms as "legit", "boffo", "sitcom", "sex appeal", "payola", and even "striptease" are attributed to the magazine.[12] Its attempt to popularize "infobahn" as a synonym for "information superhighway" never caught on. One of its popular headlines was from October 1929, when the stock market crashed: "Wall St. Lays An Egg". The most famous was "Sticks Nix Hick Pix"[13][14] (the movie-prop version renders it as "Stix nix hix pix!" in Yankee Doodle Dandy (1942), Michael Curtiz's musical–biographical film about George M. Cohan starring James Cagney). Television series are referred to as "skeins", and heads of companies or corporate teams are called "toppers". In addition, more-common English words and phrases are shortened; "audience members" becomes simply "auds", "performance" "perf", and "network" becomes "net" for example.

According to The Boston Globe, the Oxford English Dictionary cites Variety as the earliest source for about two dozen terms, including "show biz" (1945).[15] In 2005, Welcome Books published The Hollywood Dictionary by Timothy M. Gray and J. C. Suares, which defines nearly 200 of these terms.

In 2012, Rizzoli Books published Variety: An Illustrated History of the World from the Most Important Magazine in Hollywood by Gray. The book covers Variety's coverage of hundreds of world events, from the 1907 San Francisco earthquake through Arab Spring in 2012, and argues that the entertainment industry needs to stay aware of changes in politics and tastes since those changes will affect their audiences. In a foreword to the book, Martin Scorsese calls Variety "the single most formidable trade publication ever" and says that the book's content "makes you feel not only like a witness to history, but part of it too."

In 2013, Variety staffers tallied more than 200 uses of weekly or Daily Variety in TV shows and films, ranging from I Love Lucy to Entourage.[citation needed] 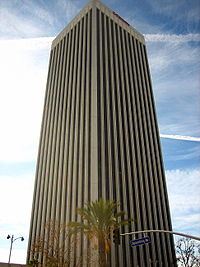 The Variety Building in December 2008.

In late 2008, Variety moved its Los Angeles offices to 5900 Wilshire, a 31-story office building on Wilshire Boulevard in the heart of the Miracle Mile area. The building was dubbed the Variety Building because a red, illuminated "Variety" sign graced the top north and south sides of the building. In early 2014, the sign and offices moved west to 11175 Santa Monica Blvd. in Westwood, where Variety shares the 9-story building with parent company PMC, Variety Insight, Variety 411, and PMC's other media brands, including Deadline.com, HollywoodLife.com, GoldDerby.com, Variety Latino and the West Coast offices of WWD and Footwear News.

This is the short list of English-language periodicals with 10,000 or more film reviews reprinted in book form:

Film reviews in Variety continued after the dates of the last reprints.

The complete text of approximately 100,000 entertainment-related obituaries (1905–1986) were reprinted as Variety Obituaries, an 11-volume set, including alphabetical index. Four additional bi-annual reprints were published (for 1987–1994) before the reprint series was discontinued.

In 2009, Variety launched a chart showcasing the top performing film trailers ahead of theatrical release in partnership with media measurement firm Visible Measures.[16]