From Infogalactic: the planetary knowledge core
Jump to: navigation, search
This article is about the historic Oxford - Cambridge line from 1845 to 1963. For its modern recreation, see East West Rail Link.

The Varsity Line (or Oxford to Cambridge Line) is an informal name for the railway route that used to link the English university cities of Oxford and Cambridge, operated successively by the London and North Western Railway, the London, Midland and Scottish Railway, and British Railways.

Services were withdrawn from the Oxford – Bletchley and Bedford – Cambridge sections at the end of 1967, even though the line had not been listed for closure as part of the Beeching Axe in 1963. Only the Bletchley - Bedford section remained open for passenger traffic.

In the absence of a rail service, Stagecoach in Bedford's X5 coach service provides a passenger service by road between Oxford and Cambridge via Bicester, Milton Keynes and Bedford.

The line was built in two stages, the first by the Buckinghamshire Railway between Oxford and Bedford in 1845.[citation needed] and the second by the Bedford and Cambridge Railway which opened on 7 July 1862.[citation needed][dubious – discuss]

Proposed from 1844, the supporting and surveying engineers were George and Robert Stephenson.[citation needed] The engineers' proposal to junction with the London and Birmingham Railway at Bletchley was eventually accepted by the shareholders, with construction starting in December 1845 and completed by September 1846.[citation needed][dubious – discuss] All operations were subcontracted to the LNWR.

By the time that the B&CR had been built, the London and Birmingham Railway amalgamated with the Grand Junction Railway to form the London & North Western Railway (LNWR), who immediately took over the running rights to the line. The LNWR bought-out the B&CR in 1865. From 1 July 1851, the LNWR operated the Buckinghamshire Railway on a 999-year lease, then absorbing the company on 21 July 1879.[1]

However, although it now owned and operated the complete line, the LNWR chose to operate it as two separate timetables, using Bletchley as originally planned as an intermediate station, with separate trains running in two directions: east to Cambridge; and west to Oxford. It was not until it was amalgamated in 1922 that the London Midland and Scottish Railway started running complete services from Oxford to Cambridge.

During World War II, the line carried many trains to and from the Bicester Military Railway. A junction between the line and the Great Central Main Line was built between Calvert and Claydon to improve connection.

After nationalisation in 1947 into British Railways, an early attempt to close the line in 1959 failed owing to local opposition. The line was not listed for closure in the 1963 The Reshaping of British Railways report, but came under pressure from the road lobby and Minister of Transport Ernest Marples,[citation needed] who had appointed Dr Beeching. Patronage of the line fell[citation needed] when the introduction of fast trains from London to Oxford and Cambridge made it quicker for passengers to go via London. At the end of 1967 BR withdrew passenger services from the Oxford – Bletchley section and all trains from the Bedford – Cambridge section, a year after it had withdrawn passenger services north of Aylesbury on the Great Central Main Line.

In the 1980s the line between Aylesbury and Bletchley via Calvert was used for transfers of empty passenger rolling stock due to the closure of the London Marylebone depot, thus transferring the maintenance of the Chiltern Lines' Class 115s to Bletchley. This ceased with the opening of a new depot in Aylesbury and the introduction of the Class 165. During 1982 the entire length of the Bletchley-Oxford section, which was still double-tracked throughout, was used for diversionary passenger services while a bridge at Hill Wooton, between Coventry and Leamington Spa was replaced; all Birmingham-London Paddington services scheduled to stop at Coventry being diverted via this route for three days.[citation needed] Also in the 1980s, there were passenger specials to Milton Keynes from Marylebone via Aylesbury and High Wycombe, which picked up passengers at disused Winslow.[2] The last passenger train to operate on this section of the line was the Mothball Tour on 29 May 1993, just before the line was taken out of use.[3]

Network SouthEast, supported by Oxfordshire County Council, reopened the Oxford – Bicester Town section to passenger traffic in 1987, and reopened Islip railway station in 1989.[4] From 15 February 2014, this link closed again for a major upgrade as described below. 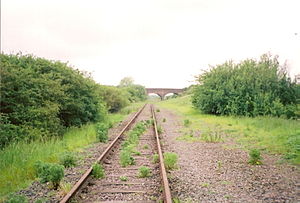 Swanbourne, showing the dilapidated condition of the track there (February 2006)

The Oxford to Bicester Line closed in 2014 for major upgrades and re-opened (from Bicester Village as far as Oxford Parkway) in October 2015. The rebuilt line is mostly 100 mph (160 km/h) double track (see Chiltern Railways#Evergreen 3): work to extend the line fully into Oxford is underway. Between Bicester Town and Newton Longville the route is in place but derelict. Within this stretch (starting 1 February 2014), Network Rail began clearing vegetation that had grown over the abandoned track.[5] The stretch between Newton Longville and Bletchley was re-laid in spring 2006 and opened on 27 March 2006 for freight traffic, carrying refuse to the Newton Longville landfill site. Between Bletchley and Bedford the track is open and in daily passenger use as the Marston Vale Line.

A further problem is the lack of through platforms at Bletchley and Bedford. The current track layout at Bletchley means that, until any eventual new high-level station is in place, through trains would have to go around the station without stopping or operate via Milton Keynes Central. Similarly, Bedford St Johns station was rebuilt on a different site, and neither it nor Bedford ('Midland Road') are now on the direct alignment towards Sandy.

This is a brief summary of work underway to reestablish the route. For details, see the main EWRL article.

The section from Oxford Parkway to Bicester Village became operational from October 2015.

In the 2011 Autumn Statement by Chancellor George Osborne, the East West railway between Oxford, Aylesbury Vale Parkway and Bedford was approved and funded, with £270 million committed to the scheme.[6] This development was anticipated to be complete by 2017.[7] 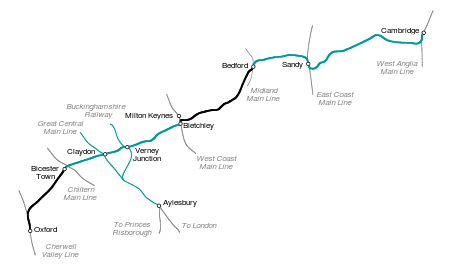 The Varsity Line and the lines it meets. Disused or freight-only sections are in blue.

Network Rail is authorised to develop a proposal for a route from Bedford to the East Coast Main Line via Sandy.

As of December 2015, it is not evident that significant consideration is being given at Network Rail to extending the line renewal as far as Cambridge.