Vasily I of Moscow 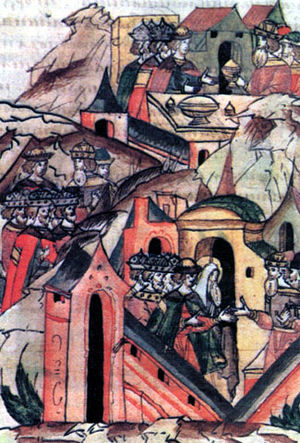 Vasily I visiting his father-in-law, Vytautas the Great.

Vasily I continued the process of unification of the Russian lands: in 1392, he annexed the principalities of Nizhny Novgorod and Murom. Nizhny Novgorod was given to Vasily by the Khan of the Golden Horde in exchange for the help Moscow had given against one of his rivals.[1] In 1397–1398 Kaluga, Vologda, Veliki Ustyug and Komi peoples' lands were annexed.

To prevent Russia from being attacked by the Golden Horde, Vasily I entered into alliance with the Grand Duchy of Lithuania in 1392 and married Sophia of Lithuania, the only daughter of Vytautas the Great. The alliance turned out to be fragile, and they waged war against each other in 1406–1408.

Mongol emir Timur raided the Slavic lands in 1395; he ruined the Volgan regions but did not penetrate so far as Moscow. Timur's raid was of service to the Russian prince as it damaged the Golden Horde, which for the next twelve years was in a state of anarchy. During the whole of this time no tribute was paid to the khan, Olug Moxammat, though vast sums of money were collected in the Moscow treasury for military purposes.

In 1408 Edigu burnt Nizhny Novgorod, Gorodets, Rostov, and many other towns but failed to take Moscow, though he had still burnt it. In 1412, however, Basil found it necessary to pay the long-deferred visit of submission to the Horde.

The growing influence of Moscow abroad was underlined by the fact that Vasily married his daughter Anna to Emperor John VIII Palaeologus of Byzantium. 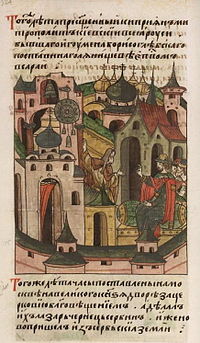 During his reign, feudal landownership kept growing. With the growth of princely authority in Moscow, feudals' judicial powers were partially diminished and transferred to Vasily's deputies and heads of volosts.

Russian (East Slavic) chronicles speak of a monk, Lazar the Serb, newly arrived from Serbia, inventing and building a clock on a tower in the Grand Prince's palace in Moscow behind the Annunciation Church at the request of Vasily I, in 1404. It was the first ever mechanical clock in Russia, and also the country's first public clock. It was among the first ten such advanced clocks in Europe, and was regarded a technical miracle at the time.[2][3]

He married Sophia of Lithuania. She was a daughter of Vytautas the Great and his wife Anna. They had nine known children: