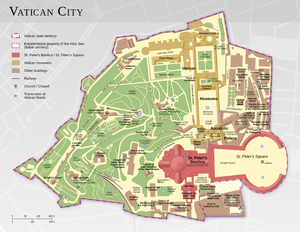 The Vatican Museums (Italian: Musei Vaticani) are the museums of the Vatican City and are located within the city's boundaries. They display works from the immense collection built up by the Popes throughout the centuries including some of the most renowned classical sculptures and most important masterpieces of Renaissance art in the world.

Pope Julius II founded the museums in the early 16th century. The Sistine Chapel with its ceiling decorated by Michelangelo and the Stanze della Segnatura decorated by Raphael are on the visitor route through the Vatican Museums. In 2013, they were visited by 5.5 million people, which combined makes it the 5th most visited art museum in the world.[1]

There are 54 galleries, or salas, in total,[citation needed] with the Sistine Chapel, notably, being the very last sala within the Museum.

The Vatican Museums trace their origin to one marble sculpture, purchased 500 years ago: the sculpture of Laocoön and his Sons was discovered 14 January 1506, in a vineyard near the basilica of Santa Maria Maggiore in Rome. Pope Julius II sent Giuliano da Sangallo and Michelangelo Buonarroti, who were working at the Vatican, to examine the discovery. On their recommendation, the pope immediately purchased the sculpture from the vineyard owner. The pope put the sculpture of Laocoön and his sons on public display at the Vatican exactly one month after its discovery.

The Museum Christianum was founded by Benedict XIV, and some of the Vatican collections formed the Lateran Museum, which Pius IX founded by decree in 1854.[2]

The Museums celebrated their 500th anniversary in October 2006 by permanently opening the excavations of a Vatican Hill necropolis to the public.[3]

The art gallery was housed in the Borgia Apartment, until Pope Pius XI ordered construction of a proper building. The new building was inaugurated on October 27, 1932.[4] The designer was Luca Beltrami. The museum has paintings including:

The Collection of Modern Religious Art houses paintings and sculptures from artists like Carlo Carrà and Giorgio de Chirico. 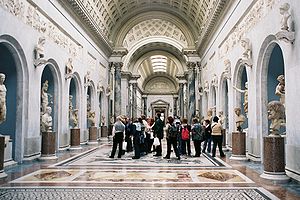 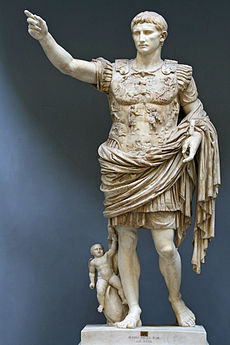 Pope Clement XIV founded the Pio-Clementino museum in 1771, and originally it contained the Renaissance and antique works. The museum and collection were enlarged by Clement's successor Pius VI. Today, the museum houses works of Greek and Roman sculpture. Some notable galleries are: 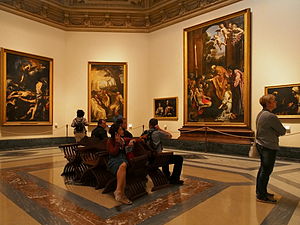 Tourists observing one of the Vatican art gallery.

This museum is named after Pope Pius VII (whose last name was Chiaramonti before his election as pope), who founded it in the early 19th century. The museum consists of a large arched gallery in which sides are exhibited several statues, sarcophaguses and friezes. The New Wing, Braccio Nuovo built by Raffaele Stern, houses important statues like The Prima Porta Augustus, Doryphorus, and The River Nile. Galeria Lapidaria is another part of Chiaramonti museum, with more than 3,000 stone tablets and inscriptions, which is the world's greatest collection of its kind. However, it is opened only by special permission, usually for reasons of study.

Founded by Pope Gregory XVI in 1836, this museum has eight galleries and houses important Etruscan pieces, coming from archaeological excavations.[6] The pieces include: vases, sarcophagus, bronzes and the Guglielmi Collection.

Founded by Pope Gregory XVI in 1839, this museum houses a grand collection of Ancient Egyptian material.[7] Such material includes papyruses, the Grassi Collection, animal mummies, and reproductions of the famous Book of the Dead.[8]

The Vatican Historical Museum (Italian: Museo storico vaticano) was founded in 1973 at the behest of Pope Paul VI,[9] and was initially hosted in environments under the Square Garden. In 1987 it was moved to the main floor of the Apostolic Palace of the Lateran and opened in March 1991.

The Vatican Historical Museum has a unique collection of portraits of the Popes from the 16th century to date, the memorable items of the Papal Military Corps of the 16–17th centuries and old religious paraphernalia related to rituals of the papacy. Also on display on the lower floor are the papamobili (Popemobiles); carriages and motorcars of Popes and Cardinals, including the first cars used by Popes.[10]

Highlights from the Painting Collection

Other Highlights in the Museum 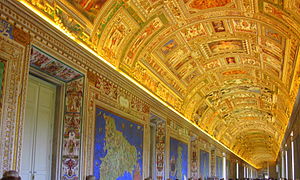 Usually more than 4 million people visit the Museums every year. In 2011, the number of visitors reached 6 million. (by Editor Report Antonio Paolucci in "L'Osservatore Romano" of January 10, 2012)

On the last Sunday of each month, the Vatican Museum is open to the public for free. It is popular and common for people to wait in line for many hours. The other days of the week you can use the online ticket office to purchase an individual ticket or group tour ticket, either of which will enable you to bypass the ticket line completely. This image is a panoramic view of one small stretch of the entire queue in April 2007, which continues for some distance in both directions beyond view. 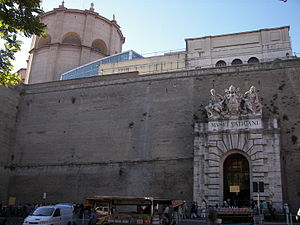