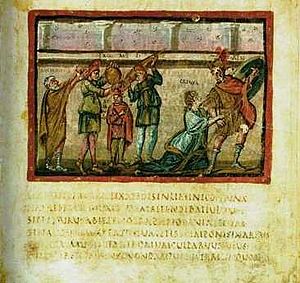 Folio 22r from the Vatican Virgil contains an illustration from the Aeneid of the flight from Troy.

The Vergilius Vaticanus (Vatican, Biblioteca Apostolica, Cod. Vat. lat. 3225, also known as the Vatican Virgil) is a manuscript containing fragments of Virgil's Aeneid and Georgics made in Rome in about 400.[1] It is one of the oldest surviving sources for the text of the Aeneid and is the oldest and one of only three illustrated manuscripts of classical literature. The two other surviving illustrated manuscripts of classical literature are the Vergilius Romanus and the Ambrosian Iliad.

There are 76 surviving leaves in the manuscript with 50 illustrations. If, as was common practice at the time, the manuscript contained all of the canonical works of Virgil, the manuscript would originally had about 440 leaves and 280 illustrations. The text was written by a single scribe in rustic capitals. As was common at the time, there is no separation between words. The scribe worked first leaving spaces for the illustrations. The illustrations were added by three different painters, all of whom used iconographic copybooks. The illustrations are contained within frames and include landscapes and architectural and other details. The miniatures are set within the text column, although a few miniatures occupy a full page. The human figures are painted in classical style with natural proportions and drawn with vivacity. The illustrations often convey the illusion of depth quite well. The gray ground of the landscapes blend into bands of rose, violet, or blue to give the impression of a hazy distance. The interior scenes are based on earlier understanding of perspective, but occasional errors suggest that the artists did not fully understand the models used. The style of these miniatures has much in common with the surviving miniatures of the Quedlinburg Itala fragment and have also been compared to the frescos found at Pompeii.

The manuscript was probably made for a pagan noble. Annotations in the manuscript indicate it was in Italy until the 7th century and in Tours in the second quarter of the 9th century. A French scribe made further notes around 1400.