From Infogalactic: the planetary knowledge core
Jump to: navigation, search
For other uses, see Vaucluse (disambiguation).

The Vaucluse (French pronunciation: ​[vo.klyz] ; Occitan: Vauclusa in classical norm or Vau-Cluso in Mistralian norm) is a department in the southeast of France, named after the famous spring, the Fontaine-de-Vaucluse. The name Vaucluse derives from the Latin Vallis Clausa (closed valley) as the valley here ends in a cliff face from which emanates a spring whose origin is so far in and so deep that it remains to be defined.

Vaucluse was created on 12 August 1793 out of parts of the departments of Bouches-du-Rhône, Drôme, and Basses-Alpes (later renamed Alpes-de-Haute-Provence). The then rural department was, like the nearby city of Lyon, a hotbed of the French Resistance in World War II.

Vaucluse is bordered by the Rhône to the west and the River Durance to the south. Mountains occupy a significant proportion of the eastern half of the department, with Mont Ventoux (1,912 m), also known as "the Giant of Provence", dominating the landscape. Other important mountain ranges include the Dentelles de Montmirail, the Monts de Vaucluse, and the Luberon. Fruit and vegetables are cultivated in great quantities in the lower-lying parts of the department, on one of the most fertile plains in southern France. The Vaucluse département has a rather large exclave within the Drôme department, the canton of Valréas (Enclave des Papes). 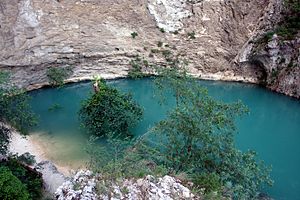 Fontaine de Vaucluse, source of the Sorgues, characterised by an upward movement of water from the depth of over 315 metres (1,033 ft)

Vaucluse is also known for its karst, including the karst spring Fontaine de Vaucluse after which "Vauclusian Risings" are named.