pronunciation (help·info); Zeelandic: Ter Veere) is a municipality and a city in the southwestern Netherlands, on Walcheren island in the province of Zeeland. 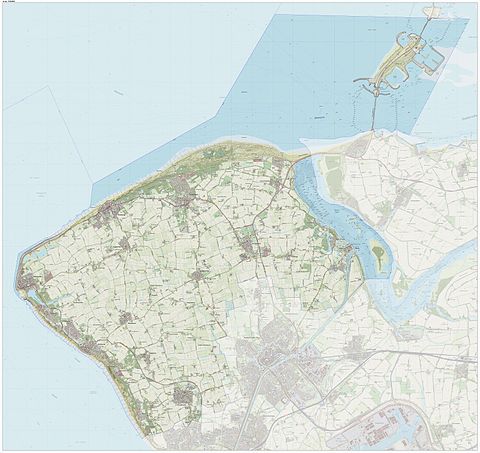 Dutch Topographic map of the municipality of Veere, June 2015

The city of Veere

The small city of Veere (population as of 2001[update]: 1,520) stands on the Veerse Meer lagoon on the island of Walcheren in Zeeland. The name means "ferry": Wolfert Van Borsselen established a ferry there in 1281.[5] Veere received city rights in 1355.

The "Admiraliteit van Veere" (Admiralty of Veere) was set up as a result of the Ordinance on the Admiralty of 8 January 1488 in an attempt to create a central naval administration in the Burgundian Netherlands. To this was subordinated the Vice-Admiralty of Flanders in Dunkirk. In 1560 under admiral Philip de Montmorency, Count of Hoorn, this admiralty relocated near Ghent and in 1561 the Habsburg naval forces were also moved to Veere.

Flemish architects Antonis Keldermans and Evert Spoorwater designed the Grote Kerk, the fortifications, the Cisterne and the town hall. During this period of prosperity, the cultural centre was located at Sandenburgh castle, the residence of the noble Van Borsele and Van Bourgondië families. Court painter Jan Gossaert van Mabuse worked here.[7] The poet Adrianus Valerius lived and worked in the city from 1591. In the 17th and 18th centuries, Veere was a prosperous trading city, with about 750 houses inside the city walls then, compared to about 300 as of 2013[update].

At the start of the Second World War, there was a Royal Netherlands Navy seaplane base at Veere, with six Fokker C XIV-W aircraft. On 12 May 1940 the base was bombed by He-111 bombers causing some casualties.[8] On 14 May, the seaplanes were ordered to evacuate to France and then England, eventually arriving in the Dutch East Indies where they would be destroyed in action with the Japanese in 1941 and 1942.[9] On 17 May, German infantry of SS Regiment Deutschland of the 2nd SS Panzer Division crossed onto Walcheren via the Sloedam and by 18:00 that evening, the Dutch forces on the island, including the garrison at Veere, were ordered to surrender.[10] Veere was finally liberated on 7 November 1944 by Scottish troops of the British 52nd (Lowland) Infantry Division during Operation Infatuate, the Allied assault on Walcheren. As part of the preparations for the operation, the island's sea dykes were bombed resulting in the inundation of much of the area. Unlike many other towns on the island, Veere was virtually undamaged in the fighting.[11]

As a result of the damming of the Veerse Gat inlet in 1961, the fishing fleet of Veere moved to a new home port at Colijnsplaat on Noord-Beveland.[12] As of 2013[update] the main business of the town is tourism.

The municipality of Veere

The area is visited by 4 million tourists annually. The main attractions are the beaches and marinas. The Storm Surge Barrier on the Oosterschelde is the most popular visitor attraction in Zeeland.[13] The Scoutcentrum Zeeland on the coast of the Veerse Meer attracts Scout visitors from around the world[14]

The town of Veere forms the setting for "Van Loon's Lives", a book of contemporary fantasy written by Hendrik Willem Van Loon in 1942, in which the protagonists are able to magically summon the great men and women of history for weekend dinner parties, leading to often humorous incidents. The book was written at the time when Veere, like the rest of the Netherlands, lay under Nazi occupation, and despite its light-hearted tone clearly indicates the longing of the writer - living in the US - for his homeland whose liberation he was doomed never to see.