Veii (also Veius, Italian: Veio) was, in ancient times, an important Etruscan city 16 km (9.9 mi) NNW of Rome, Italy; its site lies in Isola Farnese, a village of Municipio XX, an administrative subdivision of the comune of Rome in the Province of Rome. Many sites associated with Veii, which were in the city-state of Veii, are also located in Formello, another comune of the Province of Rome, immediately to the north. Formello is named after the drainage channels first created by the Veians.

Veii was the richest city of the Etruscan League, on the southern border of Etruria. It was alternately at war and in alliance with Rome for over 300 years. It eventually fell to the Roman general Camillus's army in 396 BC. Veii continued to be occupied after its capture by the Romans;

In the "Parco di Veio" adjacent to Isola Farnese, there are remnants of an apparent temple. Also tumuli and tombs have been found cut into the rock. Tombs were cut into tuff but tumuli were not. The most famous is the Grotta Campana, uncovered in 1843, a chamber tomb with the oldest known Etruscan frescoes. There are additionally long tunnels leading into the mound of the city, which may corroborate Livy's account of the Roman victory in the Battle of Veii.

The walled city of Veii

The site of Veii has long been identified as a tuff elevation of 190 hectares (470 acres) at Isola Farnese (isola from the elevation, Farnese from the palace owned by the House of Farnese there), bordering the modern village to the north, between the Fosso Piordo to the west and south and the Fosso Valchetta (ancient Cremera, which it joins to the east of the village) to the north and east.[1] The Valchetta flows a few miles eastward to join the Tiber river on the south side of Labaro along the Via Flaminia. Overall, Veii might be considered to be on the right bank of the Tiber, though set back from it. Its entire territory covered the intervening distance; that is, the city-state of Veii was on the Tiber.

The site is now a protected area, part of the Parco di Veio established by the regional authority of Lazio in 1997.[2] There are numerous sites of historical and archaeological value within the park, including many settlement and cemetery sites which appear in aerial or satellite photos as discolorations in the soil, or visible outcroppings of walls of buildings or domes of tombs. These visible sites have received their own names. At its most urban, the city walls of Veii, of which small sections remain, bordered the two intersecting streams, using the streambeds as a ditch, with a wall across the plateau closing the triangle.[3]

In ancient times the plateau was a defensible location between two stream beds and amply supplied with water. Its proximity to the Tiber and the trade route to the interior, which became the Via Flaminia, augmented its prosperity, but also placed it in competition with the city of Rome for the domination of Latium. 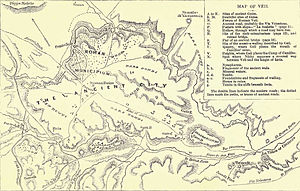 Map from The Cities and Cemeteries of Etruria.

Every Etruscan stronghold was built on an elevation and Veii was no exception. Its arx, or citadel, was placed on a bluff delineated by cliffs within the angle of confluence of the two streams, nearly separated from the main ridge by a gully through which ran a road, of Roman construction in the Roman period. An archaeological site, Piazza d'Armi ("military square"), marks the location today. A rejected alternative mentioned in the older texts is the outcrop on which the castle is located, outside of and some distance from the walls, and of lower elevation.

The territory of a city-state anywhere within the Roman domain was in Roman legal terminology called its ager; for example, the ager Romanus. The law made a number of fine distinctions, but by ager it meant primarily ager publicus, "public territory", the land belonging to the state, which in those times was primarily agricultural (ager is "field").[4] The ager Veientanus, as the Romans called the territory of Veii, covered the entire region between the right bank of the lower Tiber river and the coast; that is, all of southern Etruria. Where the northwest border is to be drawn is uncertain; probably as far west as the Monti Sabatini and Lake Bracciano in the north and southward from there.[5] The Romans placed wealthy villas in the region after the abandonment of Veii. In Etruscan times the ager Veiantanus shared the countryside with the Silva Ciminia, the remnant of an ancient forest, of which the Romans stood in superstitious dread.

The ager Veiantanus remained for the most part agrarian until it became evident after World War II that the city of Rome was going to expand into and develop that area as a suburb. Moreover, a new method of ploughing was turning over the soil a meter deep, destroying all surface evidence. John Bryan Ward-Perkins, then Director of the British School at Rome, set into motion the South Etruria Survey (1954–1968), which cataloged all the visible antiquities in the ager Veientanus. It was published in 1968.[6]

Nearly 30 years later, in 1997, the Italian government moved to protect a part of that area, creating the Veio Regional Natural Park of 14,984 hectares (37,030 acres) between the Via Cassia on the west, the Via Flaminia on the east, the Via Campagnanese on the north and the city of Rome on the south.[7] Within the park are the comuni of Campagnano di Roma, Castelnuovo di Porto, Formello, Magliano Romano, Mazzano Romano, Morlupo, Riano, Sacrofano and Municipio XX of the city of Rome.

Growth of the city in prehistoric times

The settlement and growth of the city by conurbation can be traced[1] through demographic analysis of the cemeteries and settlements on and around the plateau. The earliest evidence of occupation dates from the 10th century BC in the Late Bronze Age. Small settlements were scattered over a wider area than the plateau. In the 9th century BC, the Early Iron Age (Villanovan culture), the finds are localized to the plateau, but appear to be associated with independent settlements, each with its own cemetery. Occupation gradually intensified in the 8th (remainder of Villanovan) and 7th (Orientalizing Period) centuries BC, when the site assumed an urban appearance with city blocks in a grid pattern arranged around a central square containing a water cistern. This evidence suggests that the city of Veii was shaped into its classical form in the 7th century BC by a population, presumably Etruscan, first settling there in the 10th century BC.

During the 9th and 8th centuries BC the population density and grave goods were on the increase: more and wealthier people and also more of a disparity in wealth; i.e., the rise of a richer class. In the 8th century BC the potter's wheel and writing were introduced from Greece. During the entire period the settlements translocated around the plateau; however, a settlement (Casale del Fosso) maintained a cemetery to the north of the plateau continuously from the late 9th century BC to the early 6th century BC.

The legendary history of Veii begins in the 8th century BC, in the same century as Rome's and in connection with Rome.

In the 8th century BC during the reign of Rome's first king, Romulus, the Fidenates and the Veientes were defeated in a war with Rome.[8]

Plutarch, Life of Romulus, says of them:

The first (to oppose Romulus) were the Veientes, a people of Tuscany (the site is now in Lazio), who had large possessions, and dwelt in a spacious city; they took occasion to commence a war, by claiming Fidenae as belonging to them....[9]

This passage corresponds well with the archaeology of Veii: spaciousness and wealth. The historical evidence for Rome and archaeological for Veii indicates they were both formed by conurbation of distinct settlements in that century. Plutarch says that the first Rome "contained no more than a thousand houses," while the population of the plateau at Veii is estimated to have been stable at about 1000.[1]

Fidenae and Veii were again defeated by Rome in the 7th century BC during the reign of Rome's third king Tullus Hostilius.

In the 6th century BC Rome's sixth king Servius Tullius warred against Veii (after the expiry of an earlier truce) and the Etruscans. He is said to have shown valour in the campaign, and to have routed a great army of the enemy. The war helped him to cement his position at Rome.[10]

In 509 BC, after the overthrow of the Roman monarchy, the family of Tarquinius Superbus went into exile in Caere in Etruria. Tarquin sought to regain the throne, at first by the Tarquinian conspiracy and, when that failed, by force of arms. He convinced the cities of Tarquinii and Veii to support him, and led their armies against Rome in the Battle of Silva Arsia. The Roman army was victorious, and it is recorded by Livy that although the forces of Tarquinii fought well on the right wing, initially pushing back the Roman left wing, the Veientes on the left wing faltered and fled the battle, because they were accustomed to defeat at the hands of the Romans. After the loss of the battle the forces of Veii returned home.[11] Livy writes that later in 509 BC, consul Publius Valerius Publicola returned to fight the Veientes. It is unclear whether this was continuing from the Battle of Silva Arsia, or was some fresh dispute. It is also unclear what happened in this dispute.[12]

Veii was the richest city of the Etruscan League, on the southern border of Etruria. It was alternately at war and in alliance with Rome for over 300 years. It eventually fell to the Roman general Camillus's army in 396 BC. Veii continued to be occupied after its capture by the Romans.

Livia had an estate there, according to Suetonius. The city under Roman control, which soon assimilated to Rome, is termed "Roman Veii" as opposed to "Etruscan Veii" by scholarly literature. Under the empire the Romans called the city the Municipium Augustum Veiens. Veii is famous for its statuary including a statue of Tiberius (now in the Vatican), and the Apollo of Veii (now in the National Etruscan Museum). The city never recovered its wealth or its population after the Roman conquest.

It was abandoned after ancient times, and everything of value or utility was removed by anyone with access to the site. Finally it was filled and smoothed for ploughland and was forgotten until its rediscovery in the 17th century by the antiquarian Raffaello Fabretti.