From Infogalactic: the planetary knowledge core
Jump to: navigation, search
This article is about the fabric. For other uses, see Velvet (disambiguation). 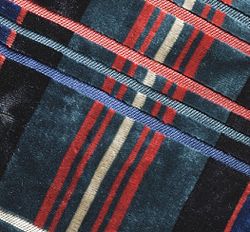 Detail of a silk cut velvet with tartan pattern. Some of the stripes are voided, showing the plain-weave ground. c.1840.

Velvet is a type of woven tufted fabric in which the cut threads are evenly distributed, with a short dense pile, giving it a distinctive feel. By extension, the word velvety means "smooth like velvet." Velvet can be made from either synthetic or natural fibers. 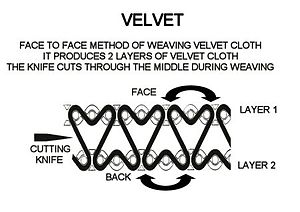 Velvet is woven on a special loom that weaves two thicknesses of the material at the same time. The two pieces are then cut apart to create the pile effect, and the two lengths of fabric are wound on separate take-up rolls. This complicated process meant that velvet was expensive to make before industrial power looms became available, and well-made velvet remains a fairly costly fabric. Velvet is difficult to clean because of its pile, but modern dry cleaning methods make cleaning more feasible. Velvet pile is created by warp or vertical yarns and velveteen pile is created by weft or fill yarns.

Velvet can be made from several different kinds of fibers, traditionally, the most expensive of which is silk. Much of the velvet sold today as "silk velvet" is actually a mix of rayon and silk.[1] Velvet made entirely from silk is rare and usually has market prices of several hundred US dollars per yard. Cotton is also used to make velvet, though this often results in a less luxurious fabric. Velvet can also be made from fibers such as linen, mohair, and wool. A cloth made by the Kuba people of the Democratic Republic of Congo from raffia is often referred to as "Kuba velvet". More recently, synthetic velvets have been developed, mostly from polyester, nylon, viscose, acetate, and from either mixtures of different synthetics or from combined synthetics and natural fibers (for example viscose mixed with silk produces a very soft, reflective fabric). A small percentage of spandex is sometimes added to give the final material a certain amount of stretch (hence "stretch velvet").

Because of its unusual softness and appearance as well as its high cost of production, velvet has often been associated with nobility. Velvet was introduced to Baghdad during the rule of Harun al-Rashid by Kashmiri merchants and to Al-Andalus by Ziryab. In the Mamluk era, Cairo was the world's largest producer of velvet. Much of it was exported to Venice (from whence it spread to most of Europe), Al-Andalus and the Mali Empire. Musa I of Mali, the ruler of the Mali Empire, visited Cairo on his pilgrimage to Mecca. Many Arab velvet makers accompanied him back to Timbuktu. Later Ibn Battuta mentions how Suleyman (mansa), the ruler of Mali, wore a locally produced complete crimson velvet caftan on Eid. During the reign of Mehmed II, assistant cooks wore blue-coloured dresses (câme-i kebûd), conical hats (külâh) and baggy trousers (çaksir) made from Bursa velvet.[citation needed]

King Richard II of England directed in his will that his body should be clothed in velveto in 1399.[2] 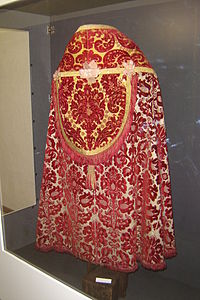 A cope in pile-on-pile velvet.

VELVET, a silken textile fabric having a short dense piled surface. In all probability the art of velvet-weaving originated in the Far East; and it is not till about the beginning of the 14th century that we find any mention of the textile. The peculiar properties of velvet, the splendid yet softened depth of dye-colour it exhibited, at once marked it out as a fit material for ecclesiastical vestments, royal and state robes, and sumptuous hangings; and the most magnificent textures of medieval times were Italian velvets. These were in many ways most effectively treated for ornamentation, such as by varying the colour of the pile, by producing pile of different lengths (pile upon pile, or double pile), and by brocading with plain silk, with uncut pile or with a ground of gold tissue, &c. The earliest sources of European artistic velvets were Lucca, Genoa, Florence and Venice, which continued to send out rich velvet textures. Somewhat later the art was taken up by Flemish weavers, and in the sixteenth century, Bruges attained a reputation for velvets that were not inferior to those of the great Italian cities.