From Infogalactic: the planetary knowledge core
Jump to: navigation, search
For the commune in France, see Vendel, Ille-et-Vilaine. 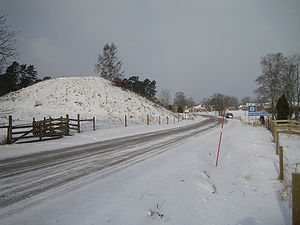 Vendel is a parish in the Swedish province of Uppland. The village overlooks a long inland stretch of water, Vendelsjön, near which the Vendel river has its confluence with the river Fyris. The church was established in 1310. Vendel is the site of an ancient royal estate, part of Uppsala öd, a network of royal estates meant to provide income for the medieval Swedish kings.

In 1881-1883 several excavations by Hjalmar Stolpe revealed 14 graves in and just beyond the south-east corner of Vendel churchyard. Several of the burials were contained in boats up to 9 metres long, and were richly furnished with arrangements of weapons (including fine swords), helmets, cauldrons and chains, beads, shields, tools, etc.

The helmets from Graves 1, 12 and 14 bear close comparison to the helmet from the early 7th century ship-burial at Sutton Hoo, Suffolk, England, with die-stamped plaques depicting scenes of warriors. The shield from Grave 12 at Vendel is also very comparable to the Sutton Hoo shield, and has a stamped metal strip mount which is actually die-linked to an equivalent piece at Sutton Hoo. The Vendel boats were identified by the presence of many ship-rivets, and accompanied by many animal sacrifices (mainly horses) within the burials. A later grave (Grave 3) contained an important set of bridle-mounts for a horse. These graves date between the later 6th to 8th centuries. 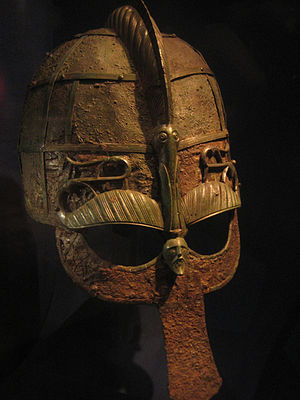 At Husby near Vendel there is a large mound which local tradition calls Ottarshögen from Ottar also known as Ohthere and Hög from the Old Norse word haugr meaning mound or barrow. Ohthere is associated with the person of that same name in the epic Beowulf. An excavation in 1917 revealed the remains of a powerful man who was buried at the beginning of the 6th century, the time of Ohthere. Other graves of similar date, associated with Ohthere's family, are at Old Uppsala.

Vendel has given its name to a period (the Vendel Age) in the Scandinavian Iron Age, and to the corresponding style in Art (the Vendel Style). It has often been suggested that the Germanic Vandals, or at least their kings or rulers, were connected to the site. In this it is coupled with the name of a companion site at Valsgärde in the same region. The close comparisons with the 27-metre ship burial at Sutton Hoo show a direct connection between the armourers producing work found at the two sites, a connection central to the understanding of both. The Sutton Hoo burial is often associated with King Raedwald of East Anglia, (ruled c 599-624), who in his later reign (c 616-624) was most powerful among the rulers of the English kingdoms.