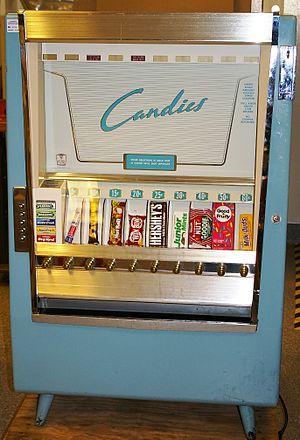 A vending machine made in 1952

A vending machine is a machine that dispenses items such as snacks, beverages, alcohol, cigarettes, lottery tickets to customers automatically, after the customer inserts currency or credit into the machine. The first modern vending machines were developed in England in the early 20th century and dispensed postcards.

Hero of Alexandria, engineer from Antiquity, who invented an early vending machine

The earliest known reference to a vending machine is in the work of Hero of Alexandria, a first-century AD Greek engineer and mathematician. His machine accepted a coin and then dispensed holy water.[1] When the coin was deposited, it fell upon a pan attached to a lever. The lever opened a valve which let some water flow out. The pan continued to tilt with the weight of the coin until it fell off, at which point a counterweight snapped the lever up and turned off the valve.

Coin-operated machines that dispensed tobacco were being operated as early as 1615 in the taverns of England. The machines were portable and made of brass.[2] An English bookseller, Richard Carlile, devised a newspaper dispensing machine for the dissemination of banned works in 1822. Simeon Denham was awarded British Patent no. 706 for his stamp dispensing machine in 1867, the first fully automatic vending machine.[3] 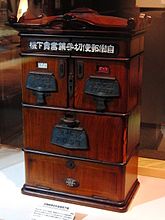 The first modern coin-operated vending machines were introduced in London, England in the early 1880s, dispensing postcards. The machine was invented by Percival Everitt in 1883 and soon became a widespread feature at railway stations and post offices, dispensing envelopes, postcards, and notepaper. The Sweetmeat Automatic Delivery Company was founded in 1887 in England as the first company to deal primarily with the installation and maintenance of vending machines.

The first vending machine in the U.S. was built in 1888 by the Thomas Adams Gum Company, selling gum on New York City train platforms. The idea of adding games to these machines as a further incentive to buy came in 1897 when the Pulver Manufacturing Company added small figures, which would move around whenever somebody bought some gum from their machines. This idea spawned a whole new type of mechanical device known as the "trade stimulators".

After paying, a product may become available by:

Some products need to be prepared to become available. For example, tickets are printed or magnetized on the spot, and coffee is freshly concocted. One of the most common form of vending machine, the snack machine, often uses a metal coil which when ordered rotates to release the product.

The main example of a vending machine giving access to all merchandise after paying for one item is a newspaper vending machine (also called vending box) found mainly in the U.S. and Canada. It contains a pile of identical newspapers. After a sale the door automatically returns to a locked position. A customer could open the box and take all of the newspapers or, for the benefit of other customers, leave all of the newspapers outside of the box, slowly return the door to an unlatched position, or block the door from fully closing, each of which are frequently discouraged, sometimes by a security clamp. The success of such machines is predicated on the assumption that the customer will be honest (hence the nickname "honor box"), and need only one copy. 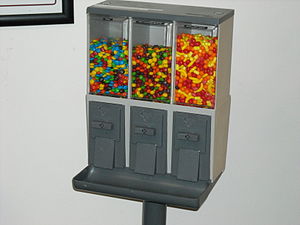 The profit margins in the bulk candy business can be quite high – gumballs, for instance, can be purchased in bulk for 2 cents a piece and sold for 25 cents in the US. Gumballs and candy have a relatively long shelf life, enabling vending machine operators to manage many machines without too much time or cost involved. In addition, the machines are typically inexpensive compared to soft drink or snack machines, which often require power and sometimes refrigeration to work. Many operators donate a percentage of the profits to charity so that locations will allow them to place the machines for free.

Bulk vending may be a more practical choice than soft drink/snack vending for an individual who also works a full-time job, since the restaurants, retail stores, and other locations suitable for bulk vending may be more likely to be open during the evening and on weekends than venues such as offices that host soft drink and snack machines.

In the past, cigarettes were commonly sold in the United States through these machines, but this is increasingly rare due to concerns about underage buyers.[citation needed] Sometimes a pass has to be inserted in the machine to prove one's age before a purchase can be made. In the United Kingdom, legislation banning them outright came into effect on October 1, 2011.[5] In Germany, Italy, Czech Republic and Japan, cigarette machines are still common.

Since 2007, however, age verification has been mandatory in Germany and Italy - buyers must be 18 or over. The various machines installed in pubs and cafés, other publicly accessible buildings and on the street accept one or more of the following as proof of age: the buyer's identity card, bank debit card (smart card) or European Union driver's license.

In Japan, age verification has been mandatory since 1 July 2008 via the Taspo card, issued only to persons aged 20 or over. The Taspo card uses RFID, stores monetary value, and is contactless. 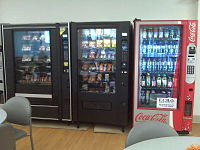 A full line of vending machines in a hospital cafeteria, including machines for drinks, snacks, and microwaveable foods
Main article: Full-line vending

A full-line vending company may set up several types of vending machines that sell a wide range of products. Products may include candy, cookies, chips, fresh fruit, milk, cold food, coffee and other hot drinks, bottles, cans of soda, and even frozen products like ice cream. These products can be sold from machines that include coffee, snack, cold food, 20-oz. bottle machines, and glass-front bottle machines. In the United States, almost all machines accept bills with more and more machines accepting $5 bills. This is an advantage to the vendor because it virtually eliminates the need for a bill changer. Larger corporations with cafeterias will often request full line vending with food service. 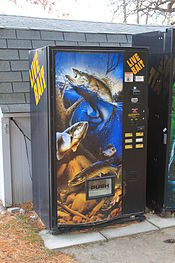 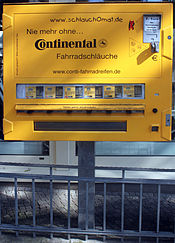 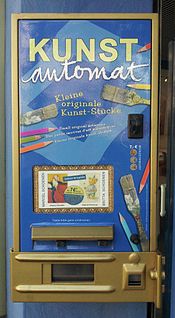 From the 1950s until well into the 1970s, vending machines were used at American airports to sell life insurance policies covering death, in the event that the buyer's flight crashed. However, this practice gradually disappeared due to the tendency of American courts to strictly construe such policies against their sellers, such as Mutual of Omaha.[6]

In the United States, under pressure from parents and anti-obesity advocates, many school districts moved to ban soft drinks, junk foods, and candy from vending machines and cafeterias.[10] State legislators in California, for example, passed laws banning the sale of machine-dispensed snacks and drinks in elementary schools in 2003, despite objections by the California-Nevada Soft Drink Association. The state followed more recently with legislation to prohibit their soda sales in high schools starting July 1, 2009, with the shortfall in school revenue to be compensated by an increase in funding for school lunch programs.[11] A similar law passed by the Connecticut General Assembly in June 2005 was vetoed by governor Jodi Rell, who stated the legislation "undermines the control and responsibility of parents with school-aged children."[12]

In schools, healthier vending options have gained popularity in the US.[13][14] Such "healthy vending machines" are marketed as allowing students to perform better in addition to better health.

There has been debate over schools providing condoms for student use, possibly through a vending machine.[15] In late 2012, 22 public high schools in Philadelphia installed vending machines providing free condoms.[16] 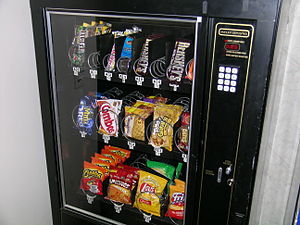 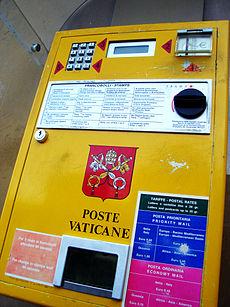 The stamp vending machine of the Vatican Postal Service 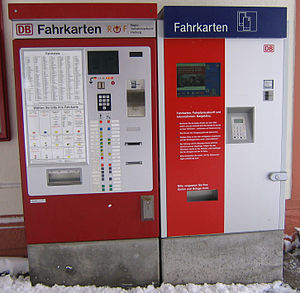 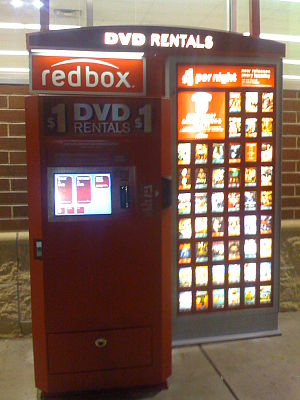 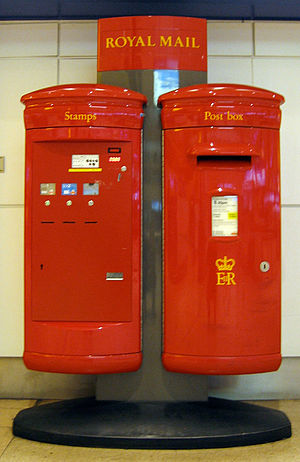 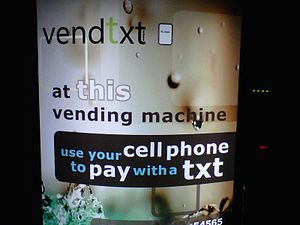 In Europe there are approximately 3.7 million vending machines, according to the latest European Vending Association market report. The majority of European vending machines are hot drinks machines, with the industry in Europe employing directly more than 85,000 people.[18] 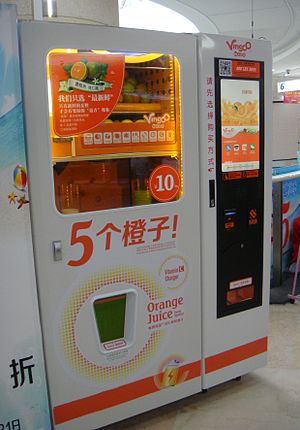 A fresh-squeezed orange juice vending machine in Haikou, Hainan, China. This machine promises to squeeze 5 oranges for 10 RMB (about $1.60 USD in 2015)

In Haikou, the capital of Hainan Province, beverage machines are more common than any other. These machines sell bottled water and soft drinks. Some specialty machines also exist in malls, such as those selling full-size, glass bottles of white and red grape wines and others selling fresh-squeezed orange juice.

Due to high labour cost and limited space, vending machines have been introduced to Hong Kong. Majorities of the vending machines are in the public, with some in the shopping centres and schools.

The vending machines in Hong Kong allow the customer to pay by cash, credit cards and Octopus cards, a type of smart card.

In recent times new luxury vending machines were installed by Signifi Solutions in Macau at a casino called Galaxy. The machines are used to redeem points for items such as electronics and other high cost items. Vending machines are not very common in India and are usually found only in major cities or along some national highways. Seaga India, a 100% subsidiary of the Seaga Group of USA, is the pioneer for bringing the concept of vending machines to India. Seaga India's machines are being used by the Delhi Metro, the state government, IT parks, factories, BPO, etc...[19][20]

Several reasons have been attributed to the lack of success of vending machines in India. The availability of cheap labour makes operating stores or kiosks economical; customers lack of technical knowledge and feel uneasy using vending machines; a lack of machines that accept a wide variety of payment methods; vandalism, rough use, and poor maintenance of the machines.[24] However, vending machines are relatively new in India and analysts believe that usage will rise.[25] Cigarette vending machines in Tokyo, with a woman promoting the products

Japan has the highest number of vending machines per capita, with about one machine for every twenty-three people.[26]

In Japan, vending machines are known as jidō-hanbaiki (自動販売機?) from jidō, or "automatic"; hanbai, or "vending"; and ki, or "machine", jihanki (自販機?) for short. Vending machines are also commonly used in casual restaurants to sell meal tickets, similar to automats: one purchases a meal ticket from a vending machine, then presents the ticket to a server, who then prepares and serves the meal. These are referred to as 食券機 (shokkenki, "food ticket machine").

Many vending machines in Japan no longer accept the old style 500 yen coins which were minted between 1982 and 2000 due to counterfeiting issues; since the 500 yen coin had a similar weight and exactly the same diameter and metal alloy as the 500 South Korean won coin, which at the time was one-tenth of the value, counterfeiters would often use modified 500 won coins in vending machines to make a profit.[27] A common feature of snack bars in the Netherlands is known as the automatiek or more commonly the automaat and is similar to an automat. It consists of a wall lined with coin-operated machines. Each has a vertical row of little windows, with a (usually hot) snack behind each, e.g., a croquette, a frikandel or a hamburger. Usually the automatiek is part of a larger establishment and will sell a broader range of food and drinks not suitable for vending machines at a counter. Behind the machine is the kitchen where the snacks are prepared, with the little windows being re-supplied from the back.

Automatieks may provide chairs for customers, but it is also common to have seating only for customers buying food at the counter. Sometimes the vending machines are in an outside wall, and no shelter is provided.

These vending machines are often located at railway stations or in busy shopping streets. 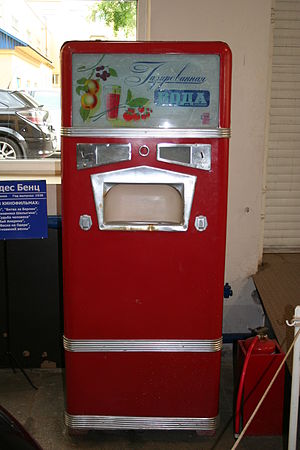