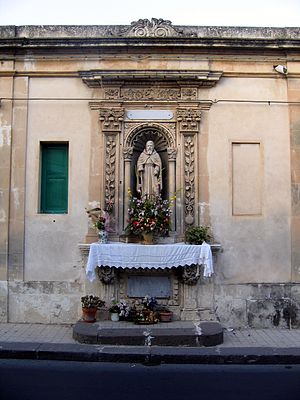 Veneration (Latin veneratio or dulia, Greek δουλεία, douleia), or veneration of saints, is the act of honoring a saint, a person who has been identified as having a high degree of sanctity or holiness.[1] Angels are shown similar veneration in many religions. Philologically, "to venerate" derives from the Latin verb, venerare, meaning to regard with reverence and respect. Veneration of saints is practiced, formally or informally, by adherents of some branches of all major religions, including Christianity, Judaism,[2] Hinduism,[3] Islam,[4] and Buddhism.[1][3]

Within Christianity, veneration is practiced by groups such as the Eastern Orthodox Church, the Roman Catholic, and Eastern Catholic Churches, all of which have varying types of canonization or glorification procedures. In some Christian denominations, veneration is shown outwardly by respectfully bowing or making the sign of the cross before a saint's icon, relics, or statue, or by going on pilgrimage to sites associated with saints. The practice of veneration is deemed heretical by iconoclastic denominations.

Hinduism has a long tradition of veneration of saints, expressed toward various gurus and teachers of sanctity, both living and dead. Branches of Buddhism include formal liturgical worship of saints, with Mahayana Buddhism classifying degrees of sainthood.[1][3]

In Islam, veneration of saints is practiced by the adherents of Sunni Islam (for example Barelvism etc), Shia Islam and Sufism, and in many parts of Southeast Asia, along with "folk Islam", which often incorporates local beliefs and practices.[5][6] Other sects, such as Wahhabists etc, abhor the practice.[7]

Veneration towards those who were considered holy began in early Christianity, with the martyrs first being given special honor. Official church commemoration of saints in Rome beginning as early as the third century. Over time, the honor also began to be given to those Christians who lived lives of holiness and sanctity. Various denominations venerate and determine saints in different ways, with some having a formal canonization or glorification process.[1]

In Roman Catholic and Orthodox theology, veneration is a type of honor distinct from the adoration due to God alone. According to Deacon Dr. Mark Miravelle, of Franciscan University of Steubenville, the English word "worship" has been associated with both veneration and adoration:

As St. Thomas Aquinas explains, adoration, which is known as latria in classical theology, is the worship and homage that is rightly offered to God alone. It is the manifestation of submission, and acknowledgement of dependence, appropriately shown towards the excellence of an uncreated divine person and to his absolute Lordship. It is the worship of the Creator that God alone deserves. Although we see in English a broader usage of the word “adoration” which may not refer to a form of worship exclusive to God—for example, when a husband says that he “adores his wife”—in general it can be maintained that adoration is the best English denotation for the worship of latria.

Veneration, known as dulia in classical theology, is the honor and reverence appropriately due to the excellence of a created person. Excellence exhibited by created beings likewise deserves recognition and honor. We see a general example of veneration in events like the awarding of academic awards for excellence in school, or the awarding of olympic medals for excellence in sports. There is nothing contrary to the proper adoration of God when we offer the appropriate honor and recognition that created persons deserve based on achievement in excellence.

Church theologians have long adopted the terms latria for the type of worship due to God alone, and dulia and proskynesis for the veneration given to angels, saints, relics and icons.[9][10][11][12][13][14] Catholic and Orthodox theologies also include the term hyperdulia for the type of veneration specifically paid to Mary, mother of Jesus, in Catholic and Orthodox traditions.[9][13] This distinction is spelled out in the dogmatic conclusions of the Seventh Ecumenical Council (787), which also decreed that iconoclasm, i.e. forbidding icons and their veneration, a dogma central to the Iconoclastic controversy, is a heresy that amounts to a denial of the incarnation of Jesus.

Now, the Roman Catholic tradition has a well established philosophy for the veneration of the Virgin Mary via the field of Mariology with Pontifical schools such as the Marianum specifically devoted to this task.[15][16][17]

In Protestant churches, veneration is sometimes considered to amount to the heresy of idolatry, and the related practice of canonization amounts to the heresy of apotheosis. Protestant theology usually denies that any real distinction between veneration and worship can be made, and claims that the practice of veneration distracts the Christian soul from its true object, the worship of God. In his Institutes of the Christian Religion, John Calvin writes that "(t)he distinction of what is called dulia and latria was invented for the very purpose of permitting divine honours to be paid to angels and dead men with apparent impunity".[18]

While orthodox and organized Judaism does not countenance the veneration of saints per se, veneration and pilgrimage to burial sites of holy Jewish leaders is an ancient part of the tradition.[19] The first documented pilgrimage was made by Caleb, when he went to Hebron to visit the cave of the patriarchs to pray at the grave of Abraham.[citation needed]

Hinduism has a longstanding and living tradition of reverence toward saints, with the line often blurring between humanity and divinity with some Hindu deities. The bhakti movements helped to popularize the veneration of saints and gurus as models showing the way to liberation.[1][3][27]

Both main branches of Buddhism, Theravada and Mahayana, recognize those who have achieved a high degree of enlightenment as an Arhat. Mahayana Buddhism particularly gives emphasis to the power of saints to aid ordinary people on the path to enlightenment. Those who have reached enlightenment, and have delayed their own complete enlightenment in order to help others, are called Bodhisattvas. Mahayana Buddhism has formal liturgical practices for venerating saints, along with very specific levels of sainthood. Tibetan Buddhist venerate especially holy lamas, such as the Dalai Lama, as saints.[1][3]

Veneration of saints in Islam is especially common in the Sufi inspired Sunni Islam, though there are many local customs in different parts of the world, especially in southeast Asia, where saints are honored and venerated. Islam has no formal process of canonization—it is typically done through popular acclaim and local custom.[1][4] Muslim saints who are venerated include the women Sufi mystic Rabia Basri, and Sufi saints Habib al-Ajami, and Saint Nuri.

Many Islamic sects condemn veneration of icons associated with saints. Destruction of historical Islamic sites, which are holy to Shi'ite Muslims, in Saudi Arabia were instigated by Wahhabis and the Saudi royal family, most notably the shrines and tombs in the Al-Baqi' cemetery in 1925.[28] In 2001, the 6th century monumental statues called the Buddhas of Bamiyan in Afghanistan were destroyed by the Taliban. In 2006, a bombing by al-Qaeda resulted in the destruction of the Al-Askari Mosque in Iraq.[29] In July 2012 Ansar Dine, a strict Islamic sect, demolished mausoleums of the saints in Timbuktu, the "City of 333 (Sufi) Saints"[30] and desecrated the Sidi Yahya Mosque.[31] In August 2012, Salafi zealots bulldozed several Sufi sites in and near Tripoli.[32]