The film festival has since taken place in late August or early September on the island of the Lido, Venice, Italy. Screenings take place in the historic Palazzo del Cinema on the Lungomare Marconi and in other venues nearby. Since its inception the Film Festival has become the most prestigious international film festival in the world.

The first edition of the Venice Film Festival was carried out from the 6 to the 21 of August in 1932.

The festival began with an idea of the president of the Venice Biennale Count Giuseppe Volpi di Misurata and Luciano De Feo, who was the very first director-selector. With good reason, the festival was considered the first international event of its type, receiving strong support from authorities. This first edition was held on the terrace of the Hotel Excelsior on the Venice Lido, and at that stage it was not a competitive event. The very first film to be shown in the history of the Festival was Rouben Mamoulian's Dr. Jekyll and Mr. Hyde, that was screened at 9:15 p.m. on 6 August 1932.

The second edition was held two years later, from 1 to 20 of August in 1934. For the first time it included a competition. At least 19 countries took part with over 300 accredited journalists. The "Mussolini Cup" was introduced for best foreign film and best Italian film; however there was no actual jury. Instead, the awards were assigned by the President of the Biennale, after listening to the opinions of both experts and audiences, and in accordance with the "National Institute for Educational Cinema". Other awards were the "Great Gold Medals of the National Fascist Association for Entertainment" to best actor and actress. The prize for best foreign film went to Robert J. Flaherty's Man of Aran and was a confirmation of the taste of the time for auteur documentaries.[3]

Starting with 1935 the Festival became a yearly event under the direction of Ottavio Croze. The actors' award was renamed "Volpi Cup". In 1936 an international jury was nominated for the first time and in 1937 the new Cinema Palace, designed by the architect Luigi Quagliata, was inaugurated.[3] 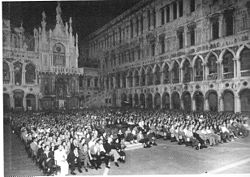 The Doge's Palace in Piazza San Marco hosted the 1947 edition.

The 1940s represent one of the most difficult moments for the review.

The conclusion of the Second World War divides the decade in two. Before 1938 political pressures distorted and ruined the festival. With the advent of the conflict the situation degenerated to such a point that the editions of 1940, 1941 and 1942, subsequently are considered as if they did not happen because they were carried out in places far away from Lido. In addition, few countries participated and there was an absolute monopoly of institutions and directors that were members of the Rome-Berlin Axis.

After this sad digression, the festival resumed full speed in 1946, after the war. For the first time, the 1946 edition was held in the month of September, in accordance to an agreement with the newly-born Cannes Film Festival, which had just held its first review in the spring of that year. With the return of normalcy, Venice once again became a great icon of the film world.

In 1947 the festival was held at the Doge's Palace, a most magnificent backdrop for hosting a record 90 thousand participants. Surely it can be considered one of the greatest editions in the history of the festival.

For the next twenty years the festival continued its development and expansion in accordance with the artistic plan set in motion after the war.

In 1963 the winds of change blow strongly during Luigi Chiarini’s directorship of the festival. During the years of his presidency, Chiarini aspired to renew the spirit and the structures of the festival, pushing for a total reorganization of the entire system. For six years the festival followed a consistent path, according to the rigid criteria put in place for the selection of works in competition, and took a firm stand against the political pressures and interference of more and more demanding movie studios, preferring the artistic quality of films to the growing commercialization of the film industry.

The social and political unrest of 1968 had strong repercussions on the Venice Bienniale. From 1969 to 1979 no prizes were awarded and the festival returned to the non-competitiveness of the first edition. In 1973, 1977 and 1978, the festival was not even held. The Golden Lion didn't make its return until 1980.

The long-awaited rebirth came in 1979, thanks to the new director Carlo Lizzani, who decided to restore the image and value the festival had lost over the last decade. The 1979 edition laid the foundation for the restoration of international prestige. In an attempt to create a more modern image of the festival, the neo-director created a committee of experts to assist in selecting the works and to increase the diversity of submissions to the festival.

The Film Festival's current awards are: 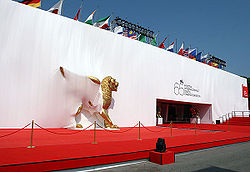 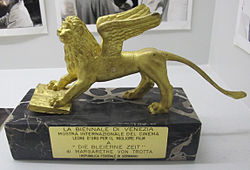 This section is open to all "custom-format" works, with a wider view towards new trends in the expressive languages that converge in film. The awards of the Orizzonti section are:

Films not in completion

The Mussolini Cup was the top award from 1934 to 1942 for Best Italian and Best Foreign Film. Named after Italy's dictator Benito Mussolini, it was abandoned upon his ousting in 1943.[6]

Great Gold Medals of the National Fascist Association for Entertainment

This was awarded to Best Actor and Best Actress.[7] It was later replaced by the Volpi Cup for actors and actresses. The first time this prize was awarded to Katharine Hepburn for her role in Little Women by George Cukor [8]

In the first edition of the festival in 1932, due to the lack of a jury and the awarding of official prizes, a list of acknowledgements was decided by popular vote, an tally determined by the number of people flocking to the films, and announced by the Organizing Committee. From this the Best Director was declared – Russian Nikolaj Ekk for the film The Road to Life, while the film by René Clair Give Us Liberty was voted Best Film.