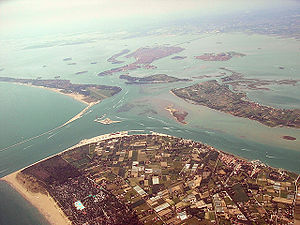 Aerial view of the Venetian Lagoon, showing many of the islands including Venice itself, center rear, with the bridge to the mainland 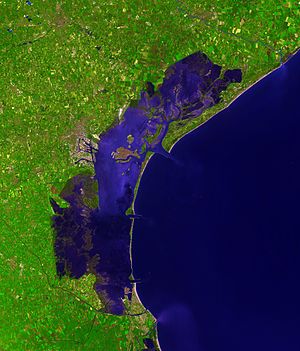 The Venetian Lagoon is an enclosed bay of the Adriatic Sea, in northern Italy, in which the city of Venice is situated. Its name in the Italian and Venetian languages, Laguna Veneta – cognate of Latin lacus, "lake" – has provided the international name for an enclosed, shallow embayment of salt water, a lagoon.

The Venetian Lagoon stretches from the River Sile in the north to the Brenta in the south, with a surface area of around 550 square kilometres (210 sq mi). It is around 8% land, including Venice itself and many smaller islands. About 11% is permanently covered by open water, or canal, as the network of dredged channels are called, while around 80% consists of mud flats, tidal shallows and salt marshes. The lagoon is the largest wetland in the Mediterranean Basin.[1]

It is connected to the Adriatic Sea by three inlets: the Lido, Malamocco and Chioggia inlets. Sited at the end of a largely enclosed sea, the lagoon is subject to high variations in water level,[citation needed] the most extreme being the spring tides known as the acqua alta (Italian for "high water"), which regularly flood much of Venice.

The nearby Marano-Grado Lagoon, with a surface area of around 160 square kilometres (62 sq mi), is the northernmost lagoon in the Adriatic Sea and is called sometimes the "twin sister of the Venice lagoon".

The Lagoon of Venice is the most important survivor of a system of estuarine lagoons that in Roman times extended from Ravenna north to Trieste. In the sixth century, the Lagoon gave security to Romanised people fleeing invaders (mostly the Huns). Later, it provided naturally protected conditions for the growth of the Venetian Republic and its maritime empire. It still provides a base for a seaport, the Venetian Arsenal, and for fishing, as well as a limited amount of hunting and the newer industry of fish farming. 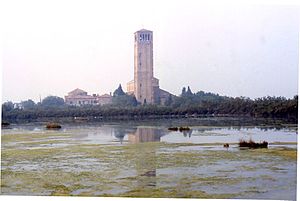 The island of Torcello seen from the Lagoon at low tide

The Lagoon was formed about six to seven thousand years ago, when the marine transgression following the Ice Age flooded the upper Adriatic coastal plain.[Note 1] Deposition of river sediments compensated for the sinking coastal plain, and coastwise drift from the mouth of the Po tended to close tidal inlets with sand bars.

The present aspect of the Lagoon is due to human intervention. In the fifteenth and sixteenth centuries, Venetian hydraulic projects to prevent the lagoon from turning into a marsh reversed the natural evolution of the Lagoon. Pumping of aquifers since the nineteenth century has increased subsidence. Originally many of the Lagoon’s islands were marshy, but a gradual programme of drainage rendered them habitable. Many of the smaller islands are entirely artificial, while some areas around the seaport of the Mestre are also reclaimed islands. The remaining islands are essentially dunes, including those of the coastal strip (Lido, Pellestrina and Treporti).

Venice Lagoon was inhabited from the most ancient times, but it was only during and after the fall of the Western Roman Empire that many people, coming from the Venetian mainland, settled in a number large enough to found the city of Venice. Today, the main cities inside the lagoon are Venice (at the centre of it) and Chioggia (at the southern inlet); Lido di Venezia and Pellestrina are inhabited as well, but they are part of Venice. However, the most part of the inhabitants of Venice, as well as its economic core, its airport and its harbor, stand on the western border of the lagoon, around the former towns of Mestre and Marghera. At the northern end of the lagoon, there is the town of Jesolo, a famous sea resort; and the town of Cavallino-Treporti.

The level of pollution in the lagoon has long been a concern.[4][5] The large phytoplankton and macroalgae blooms of the late 1980s were particularly devastating.[6][7] Recently the lagoon has also been identified as being one of the primary areas where non-indigenous species are introduced into the Mediterranean Sea.[8][9] 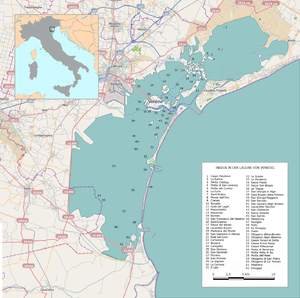 The largest islands or archipelagos by area, excluding coastal reclaimed land and the coastal barrier beaches:

Other inhabited islands include: