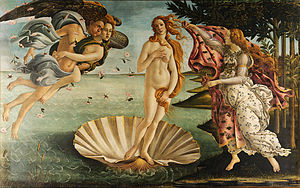 The Birth of Venus by Sandro Botticelli, c. 1486

Venus Anadyomene[1] (from Greek, "Venus Rising From the Sea") is one of the iconic representations of Aphrodite, made famous in a much-admired painting by Apelles, now lost, but described in Pliny's Natural History, with the anecdote that the great Apelles employed Campaspe, a mistress of Alexander the Great, for his model. According to Athenaeus,[2] the idea of Aphrodite rising from the sea was inspired by the courtesan Phryne, who, during the time of the festivals of the Eleusinia and Poseidonia, often swam nude in the sea. A scallop shell, often found in Venus Anadyomenes, is a symbol of the female vulva.

A Pompeian mural of Venus Anadyomene

According to Greek mythology, Aphrodite was born as an adult woman from the sea, which also perpetually renewed her virginity. A motif of the goddess wringing out her hair is often repeated. The subject was often repeated in Antiquity, a fourth-century sculptural representation from a Gallo-Roman villa in Aquitania (Louvre) testifying to the motif's continued viability in Late Antiquity.

Apelles' painting was brought to Rome, but was in badly damaged condition by the time of Pliny: listing Apelles' best paintings, he noted "[Another of] Venus emerging from the sea, dedicated by the late Augustus of blessed memory in the shrine of Caesar his [adoptive-]father, which is called "The Anadyomene", praised in Greek verses like other works, conquered by time but undimmed in fame."[3]

The image of Venus Anadyomene is one of the very few images that survived in Western Europe in its classical appearance, from Antiquity into the High Middle Ages. Jean Seznec instances[4] two images of Venus among constellations illustrating 14th-century Provençal manuscripts of Matfre Ermengau of Béziers' Breviari d'amor, in which Venus is represented nude in the sea: "This extraordinary conservatism may perhaps be explained by the fact that the culture of the last pagan centuries remained alive longer in Provence than elsewhere."

Through the desire of Renaissance artists reading Pliny to emulate Apelles, and, if possible, to outdo him, Venus Anadyomene was taken up again in the 15th century: besides Botticelli's famous Birth of Venus (Uffizi Gallery, Florence), another early Venus Anadyomene is the bas-relief by Antonio Lombardo from Wilton House (Victoria and Albert Museum, London).

Titian's Venus Anadyomene, c. 1520, formerly a long-term loan by the Duke of Sutherland, was 2003's acquisition of the year at the National Gallery of Scotland, Edinburgh. It depicts Venus standing in the sea, wringing out her hair. The scallop shell is merely symbolic, as it does not interact with Venus.

The Birth of Venus, executed by William-Adolphe Bouguereau in 1879, reimagines Botticelli's composition, and is another testament to the theme's continuing popularity among the academic painters of the late 19th century. It was shown at the Paris Salon of 1879, and was bought for the Musée du Luxembourg. Venus' nude figure takes up the center of the composition, with many admirers gathered around her.

Alexandre Cabanel's painting of the same name reworking the then recently discovered Pompeii fresco, was shown at the Paris Salon in 1863, and bought by Napoleon III for his own personal collection. Venus lies naked on the waves ambiguously, with putti flying above her. Robert Rosenblum, comment on Cabanel's painting is that "This Venus hovers somewhere between an ancient deity and a modern dream... and the ambiguity of her eyes, that seem to be closed but that a close look reveals that she is awake... A nude who could be asleep or awake is specially formidable for a male viewer"[5]

Such a highly conventionalized theme, with undertones of eroticism justified by its mythological context, was ripe for modernist deconstruction; in 1870 Arthur Rimbaud evoked the image of a portly Clara Venus ("famous Venus") with all-too-human blemishes (déficits) in a sardonic poem that introduced cellulite to high literature: La graisse sous la peau paraît en feuilles plates (the fat under the skin appears in slabs).

Pablo Picasso recast the image of Venus Anadyomene in the central figure of his seminal painting Les Demoiselles d'Avignon (1907), a modernist deconstruction of the icon, and one of the foundation stones of Cubism.

Venus Anadyomene offered a natural subject for a fountain: the National Gallery of Art, Washington DC has a lifesize bronze plumbed so that water drips from Venus' hair, modelled by a close follower of Giambologna, late sixteenth century. Rococo sculptures of the subject were modestly draped across the hips, but bolder nudes appealed to male nineteenth-century patrons: Théodore Chassériau executed the subject in 1835 and Jean-Auguste-Dominique Ingres' Venus Anadyomene, completed after many years in 1848, is one of the painter's most celebrated works (Musée Condé, Chantilly, France).