From Infogalactic: the planetary knowledge core
Jump to: navigation, search
For other uses, see Verdun (disambiguation).

Verdun (/vɛrˈdʌn, vɜːr-/;[1] French pronunciation: ​[vɛʁ.dœ̃]; medieval German: Wirten, official name before 1970 Verdun-sur-Meuse) is a small city in the Meuse department in Lorraine in north-eastern France. It is a sub-prefecture (arrondissement) of the department.

Verdun is the biggest city in Meuse, although the capital of the department is the slightly smaller city of Bar-le-Duc.

Verdun (Latin: Verodunum, meaning "strong fort") was founded by the Gauls (as its Celtic name shows; "Dunum" is the Latinized version of a Celtic word meaning oppidum). It has been the seat of the bishop of Verdun since the 4th century AD, with interruptions. In the Treaty of Verdun in AD 843, the empire of Charlemagne was divided into three parts.

The city has been famous for Dragées or sugared almonds from 1200 onwards; they were distributed at the baptism of French princes.[2]

Verdun was part of the middle kingdom of Lotharingia, and in 1374 it became an Imperial Free City of the Holy Roman Empire. The Bishopric of Verdun formed together with Tull (Toul) and Metz the Three Bishoprics, which were annexed by France in 1552 (recognized in 1648 by the Peace of Westphalia).

From 1624 to 1636, a large bastioned citadel was constructed on the site of the Abbey of Saint Vanne. In 1670, Vauban visited Verdun and drew up an ambitious scheme to fortify the whole city. Although much of his plan was built in the following decades, some of the elements were not completed until after the Napoleonic Wars. Despite the extensive fortifications, Verdun was captured by the Prussians in 1792, but abandoned by them after the Battle of Valmy. During the Napoleonic War, the citadel was used to hold British prisoners-of-war. In the Franco-Prussian War, Verdun was the last French fortress to surrender in 1870. Shortly afterwards, a new system of fortification was begun.[3] This consisted of a mutually supporting ring of 22 polygonal forts up to 8 kilometres (5.0 mi) from the city, and an inner ring of 6 forts.[4] 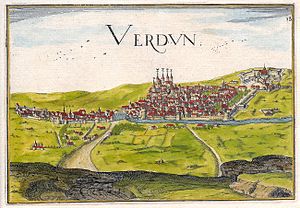 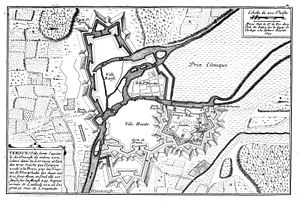 The Battle of Verdun was fought on August 20, 1792 between French Revolutionary forces and a Prussian army. The Prussians were victorious. This therefore opened the path to Paris.[5]

Norwich Duff visited Verdun in 1819, shortly after the conclusion of the Napoleonic Wars. He writes:

Verdun is prettily situated in a valley surrounded by hills. The River Meuse runs through the town and forms several canals and ditches round the town which is fortified and, I believe, by the great Marshal Vauban.

The citadel and [surrounds] are a good deal out of repair and [people] were at work on them. Though there is little to see at Verdun, every part of it felt interesting from the number of our countrymen [i.e. British prisoners of war] confined here during the war. Verdun is famous for its sweetmeats, sugar plums, confits etc. which are said to be the best in France. They made us show our passports [here] it being a fortified town. 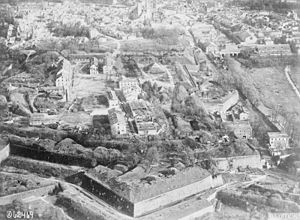 Citadel of Verdun during World War I 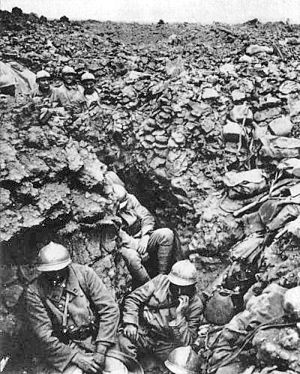 French 87th infantry regiment during the Battle of Verdun 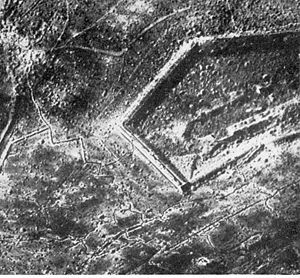 Aerial photograph of Fort Douaumont towards the end of 1916.

Verdun was the site of a major battle of the First World War. One of the costliest battles in history, Verdun exemplified the policy of a "war of attrition" pursued by both sides, which led to an enormous loss of life.

Following the failure of the Schlieffen Plan in 1914 and the solidifying of the Western Front, Germany remained on the strategic defensive in the west throughout most of 1915. In the winter of 1915–1916, German General Erich von Falkenhayn, the chief of the German General Staff (1914–1916) made plans for a large offensive on the Western Front that ultimately aimed to break Great Britain, which he believed was Germany's main enemy. Falkenhayn argued that Britain, hidden behind the shield of the French army, could be met head on and defeated only after this shield was broken. As Falkenhayn recalled it, his so-called Christmas memorandum to Kaiser Wilhelm II envisioned a massive but limited attack on a French position 'for the retention of which the French Command would be compelled to throw in every man they have'. Once the French army had bled to death, Britain could be brought down by Germany's submarine blockade and superior military strength. The logic of initiating a battle not to gain territory or a strategic position but simply to create a self-sustaining killing ground—to bleed the French army white—pointed to the grimness of military vision in 1916.

Recent scholarship by Holger Afflerbach and others, however, has questioned the veracity of the Christmas memo. No copy has ever surfaced and the only account of it appeared in Falkenhayn's post-war memoir. His army commanders at Verdun, including the German Crown Prince, denied any knowledge of an attrition strategy. It is possible that Falkenhayn did not specifically design the battle to bleed the French army but used this supposed motive after the fact in an attempt to justify the Verdun offensive, despite its failure.

Verdun was the strongest point in pre-war France, ringed by a string of powerful forts, including Douaumont and Vaux. By 1916, the salient at Verdun jutted into the German lines and lay vulnerable to attack from three sides. The historic city of Verdun had been a Gallic fortress before Roman times and later a key asset in wars against Prussia, and Falkenhayn suspected that the French would throw as many men as necessary into its defence. Ironically, France had substantially weakened Verdun's defences after the outbreak of the war, an oversight that would contribute to the removal of Joseph Joffre from supreme command at the end of 1916. The attack was slated to begin on February 12, then the 16th, but snow forced repeated postponements.

Falkenhayn massed artillery to the north and east of Verdun to precede the infantry advance with intensive artillery bombardment. His attack would hit the French positions on the right bank of the Meuse. Although French intelligence had warned of his plans, these warnings were ignored by the French Command and troop levels in the area remained low. Consequently, Verdun was utterly unprepared for the initial bombardment on the morning of 21 February 1916. German infantry attacks followed that afternoon and met tenacious but ultimately inadequate resistance for the first four days.

On 25 February the Germans occupied Fort Douaumont. French reinforcements—now under the leadership of General Pétain—began to arrive and were instantly thrown into "the furnace" (as the battle was called) to slow the German advance, no matter what the cost. Over the next several days, the stubborn defense managed to slow the German advance with a series of bloody counter-attacks. In March, Falkenhayn decided to target the French positions on the left bank of the Meuse as well, broadening the offensive front twofold. Throughout March and April, Le Mort Homme and Hill 304 were under continuous heavy bombardment and relentless infantry attacks. Meanwhile, Pétain organised repeated, small-scale counter-attacks to slow the German advance. He also ensured that the Bar-le-Duc road into Verdun—the only one to survive German shelling—remained open. It became known as La Voie Sacrée ("the Sacred Way") because it continued to carry vital supplies and reinforcements into the Verdun front despite constant artillery attack.

German gains continued in June, but slowly and only after increasingly heavy losses on their side. They attacked the heights on both banks of the river. On 7 June, following almost a week of bitter resistance, Fort Vaux fell to the Germans after a murderous hand-to-hand fight inside the fort itself. On 23 June the Germans reached what would become the furthest point of their advance. The line was just in front of Fort Souville, the last stronghold before Verdun itself. Pétain was making plans to evacuate the right bank of the Meuse when the Allies' offensive on the Somme River was launched on 1 July, partly to relieve pressure on the French. The Germans could no longer afford to continue their offensive at Verdun when they were needed so desperately on the Somme. At a cost of some 400,000 German casualties and a similar number of French, the attack was finally called off. Germany had failed to bleed France to death.

The battle continued, however, from October to the end of the year. French offensives, employing new tactics devised by General Robert Nivelle, regained the forts and territory they had lost earlier. This was the only gleam of hope in an otherwise abysmal landscape.

Overall, the battle lasted 11 months. Falkenhayn was replaced by Hindenburg as Chief of General Staff. General Nivelle was promoted over the head of General Pétain to replace Generalissimo Joffre as French supreme commander, although he was to hold the post for less than six months.

There are many French and German cemeteries throughout the battlefield. The largest is the French National Cemetery and Douaumont ossuary, near Fort Douaumont. Thirteen thousand crosses adorn the field in front of the ossuary, which holds roughly 130,000 unidentified remains brought in from the battlefield. Every year yields more remains, which are often placed inside the ossuary's vaults.

Among many revered memorials on the battlefield is the "Bayonet Trench", which marks the location where some dozen bayonets lined up in a row were discovered projecting out of the ground after the war; below each rifle was the body of a French soldier. It has been assumed that these belonged to a group of soldiers who had rested their rifles against the parapet of the trench they were occupying when they were killed during a bombardment, and the men were buried where they lay in the trench and the rifles left untouched. However, this is probably not historically accurate: experts agree that the bayonets were probably affixed to the rifles after the attack, and installed by survivors to memorialize the spot.[6]

Nearby, the World War I Meuse-Argonne American Cemetery and Memorial is located at Romagne-sous-Montfaucon to the northwest of Verdun. It is the final resting place for 14,246 American military dead, most of whom died in the Meuse-Argonne Offensive. The chapel contains a memorial to the 954 American missing whose remains were never recovered or identified.

The Châtel Gate is the only remaining part of the medieval city walls. It leads onto La Roche Square.

La Citadelle was built in the 17th Century. It is still in military hands but the underlying tunnels can still be visited.

Notre-Dame de Verdun Cathedral was consecrated in 1147 but was built on the site of an earlier church. The 12th Century Lion Door on the north side has a lavishly decorated tympanum. The whole building was heavily restored in the 18th Century.

The Episcopal Palace was built in the 18th Century by Robert de Cotte and has a fine façade. Part of the building is occupied by the World Peace Centre.

The Princerie Museum is located in the former residence of the princes of Verdun. It contains historic work of art from the region.

The "Subterrean Citadel" is situated at the entrance of Verdun. It holds 4km of shafts that used to accommodate soldiers during the war.