From Infogalactic: the planetary knowledge core
Jump to: navigation, search
For other uses, see Veritas (disambiguation). 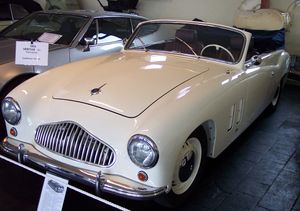 Veritas was a West German post World War II sports and race car company, located in the village of Hausen am Andelsbach, near Sigmaringen, Baden-Württemberg, later at Meßkirch and Muggensturm and moved finally to the Nürburgring.

The company was founded by Ernst Loof, Georg Meier and Lorenz Dietrich who initially re-built and tuned pre-war BMW 328 cars using components supplied by a customer, turning them into BMW-Veritas cars.[1] The first car was used in 1947 by its owner Karl Kling to win at Hockenheim and subsequently become the 1947 German 2-litre champion. After only a few cars were made, following an objection from BMW, the cars became simply known as Veritas.

The first Veritas to be made for normal road use was made in 1949 with the launch of the Komet coupé which was little more than a racing Veritas RS made street legal.[1] It was followed by the more civilised 2+2 Saturn coupé and Scorpion cabriolet, both being styled by Ben Bowden.

The company moved to larger premises in Muggensturm in 1949[1] but were badly under capitalised. New cars were designed using a 1998 cc engine designed Eric Zipprich and built by Heinkel.[1] Over 200 orders were received for the new car but there was not enough money available to buy the components and production came to a halt in 1950 and the company continued in operation until 1952 by making new bodies for Panhard cars.

Ernst Loof moved to the Nürburgring in 1950[1] where he rented the old Auto Union workshops and set up a new company Automobilwerke Ernst Loof GmbH and started a new range of Veritas cars at first with the Heinkel manufactured engine and saloon or cabriolet coachwork by Spohn. Money quickly ran out however and the final bodies were fitted with Ford or Opel engines. The number of cars made at the Nürburgring is estimated as between 6 and 20.[1]

After a virtual disappearance from motor racing and automotive engineering for nearly 50 years, a small company known as Vermot AG[3] plans on "resurrecting" the Veritas name on a planned model known as the RS III.

In 2001, a concept known as the Veritas RS3 was shown.[4] With some design cues taken from boats, in which Vermot explored the market at one time, it was well received. It used a BMW sourced 6.0 liter V-12, producing 670 horsepower (500 kW).

In 2008, it was announced that Vermot AG was to take serious efforts towards producing the RS III.