Through most of its history, at least from the time of the American Civil War until the 1960s, Vermont was an almost exclusively Republican state, with Republicans dominating Vermont politics, especially the Governorship, from 1854-1960.[1] However, perhaps inspired by the election of John F. Kennedy as US President in 1960, Vermont's Democrats since that time have staged an impressive resurgence in Vermont's politics.[2]

Today the Democrats have the dominant political party organization in the Green Mountain State, holding every major office at both the federal and state level except for Lieutenant Governor.

The Vermont Democratic Party is relatively young. Since the state was dominated for so long by its Republicans, the United States Democratic Party gave little attention to Democrats in the state.[3] It wasn't until the 1960s that the Democrats started to pull together a statewide organization.[3] The exact date or year the state party was formed is unknown. It is difficult to conduct research about the party's history because it does not retain archives of historical documents.[4]

The Vermont Democratic Party advocates for socialized universal health care, equality for all, and social justice.[5] Many of the party's proposals have been adopted, including universal health care (Green Mountain Care), same-sex marriage ('gay marriage'), and the closing and de-commissioning of the Vermont Yankee nuclear power station, set to take place in early 2015. The party tends towards environmentalism, favoring measures to protect Vermont's natural resources and ecosystems. Democrats in the state have also called for Vermont to be the first state to use only renewable energy sources. The Party also favors campaign finance reform, but lines up behind the National Party in voicing support for some liberalization of campaign finance regulations so that it may better remain competitive with the Republicans.

Documents representing the Vermont Democratic Party's platform have been approved on September 11, 2010 by the party,[5] in 2012, and there is a latest iteration set for approval during late 2014. It conforms very closely to the United States Democratic Party platform, addressing issues such as; the economy, the environment, foreign policy, and civil rights.

The primary focus of the Vermont Democratic Party's economic platform rests with keeping businesses owned and operated in Vermont. There should be heavy focus on entrepreneurship and job creation. The party supports a strong and vibrant middle class that encourages youth to pursue careers within the state.[5] Its main focus is economic growth and job creation. The party believes that the state government should make Vermont a desirable place for people to bring,or begin, their businesses. The party plans on doing this by giving financial incentives to businesses that are energy efficient, are located in developing areas within Vermont, and provide workers with a livable wage.[clarification needed] The party wants to reverse[clarification needed] the Bush tax cuts.[5] It voices support for a graduated income tax; the premise that taxes should be based upon the individual taxpayer's ability to pay them.[clarification needed] Under such a system, the wealthy would be taxed at a higher percentage level than the middle class, and the very poor would pay little or no income tax.

The party believes a healthy environment is essential to the quality of life and recognizes global climate change as a major problem. The party believes everyone has moral and ethical obligations to protect and conserve the environment. It is committed to the rigorous and consistent enforcement of environmental laws and regulations. It also supports alternative energy, including investments and research, and favors the rapid implementation of 'cleaner' alternatives to oil and other fossil fuels. Vermont Democrats also support laws that places caps, or limits, on the carbon emissions of both public transportation and personal vehicles.[5]

The Vermont Democratic Party supports equal rights amendments to the Constitution and the protection of all citizens, regardless of race, gender or gender identity, sexual orientation, age, national origin, disability, military service, or creed. It has supported Vermont's pioneering initiatives in same-sex marriage, plus the predecessor laws favoring civil unions. It also supports the repeals of Don't Ask, Don't Tell and the Defense of Marriage Act. The party also denounces torture and believes all people have due process rights that should never be violated. The party strongly supported President Obama's decision to ban the torturous technique of waterboarding from being used on suspected terrorists.[5] 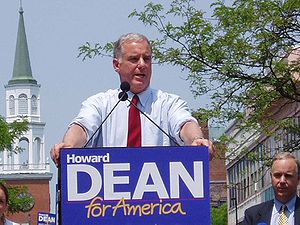 Howard Dean may be the most nationally renowned Democratic politician to come out of Vermont in recent years. He served as Governor of Vermont from 1991 to 2003. In 2004 he ran unsuccessfully for the Democratic nomination for president. He had a poor showing in many states. The only primary he won was in Vermont. Dean also served as chairman of the Democratic National Committee from 2005 to 2009, and is credited with being instrumental in Barack Obama's running successfully for the presidency in 2008. His 50-State-Strategy is widely considered the reason Obama was able to win in traditionally Republican states.

As of late 2014, there are Vermont Democratic Party incumbents holding five of the six statewide offices in the executive branch—all but Lieutenant Governor—and the Democrats also hold firm majorities in Vermont's Senate and House of Representatives. Democrats hold one of the state's U.S. Senate seats; the other is held by independent Bernie Sanders, who caucuses with the Democrats but is not a member of the party. The Democrats also hold the state's single 'At-Large' seat in the U.S. House of Representatives; the incumbent, Representative Peter Welch, first elected in 2006, was the first Democrat to represent Vermont in the lower house of Congress since 1961, and the first House Democrat from Vermont to be re-elected in more than 150 years. 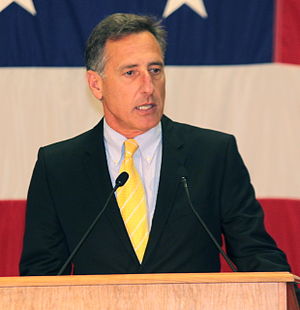