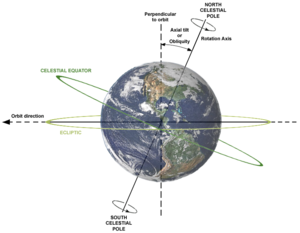 Illustration of astronomical calculations of northward equinox and Nowruz

The equinox can be as early as March 19 or as late as March 21, the precise time being about 5 hours 49 minutes later in a common year, and about 18 hours 11 minutes earlier in a leap year, than in the previous year. It is the balance of common years and leap years that keeps the calendar date of the equinox from drifting more than a day from March 20 each year.

The March equinox is one point in time commonly used to determine the length of the tropical year. The mean tropical year is the average of all the tropical years measured from every point along the earth's orbit.[2] In 1983 the mean March equinox fell at 1.48 AM GMT on 23 March. When tropical year measurements from several successive years are compared, variations are found which are due to nutation, and to the planetary perturbations acting on the Sun. Meeus and Savoie (1992, p. 41) provided the following examples of intervals between northward equinoxes:

The point where the sun crosses the celestial equator northwards is called the First Point of Aries. However, due to the precession of the equinoxes, this point is no longer in the constellation Aries, but rather in Pisces. By the year 2600 it will be in Aquarius (some Archeoastronomers and Astrologers believe that will be the start of the approximate 2,150 years of "the Age of Aquarius", while others think it may have already started, and varying calculations in between).

Movement of the horizon in relation to the Sun

On the day of an equinox, the sun's disk crosses the horizon directly in the east at dawn and crosses directly in the west at dusk. However, because of refraction the sun will usually appear slightly above the horizon when its "true" middle is rising or setting. For viewers at the north or south poles, the sun moves steadily just above the horizon, not obviously rising or sinking apart from the movement in "declination" (and hence elevation) of a little under a half (0.39) degree per day.

The Babylonian calendar began with the first full moon after the vernal equinox, the day after the Sumerian goddess Inanna's return from the underworld (later known as Ishtar, in the Akitu ceremony, with parades through the Ishtar gate to the Eanna temple, and the ritual re-enactment of the marriage to Tammuz, or Sumerian Dummuzi.

The Persian calendar begins each year at the northward equinox, observationally determined at Tehran.[3]

The Julian calendar reform lengthened seven months and replaced the intercalary month with an intercalary day to be added every four years to February. It was based on a length for the year of 365 days and 6 hours (365.25 d), while the mean tropical year is about 11 minutes and 15 seconds less than that. This had the effect of adding about three quarters of an hour every four years. The effect accumulated from inception in 45 BC until the 16th century, when the northern vernal equinox fell on March 10 or 11. 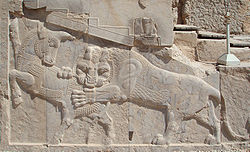 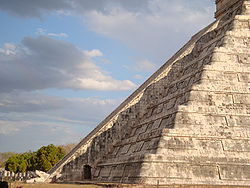 Chichen Itza pyramid during the spring equinox – Kukulkan, the famous descent of the snake

According to the sidereal solar calendar, celebrations which originally coincided with the vernal equinox now take place throughout South Asia and parts of Southeast Asia on the day when the sun enters the sidereal Aries, generally around 14 April.