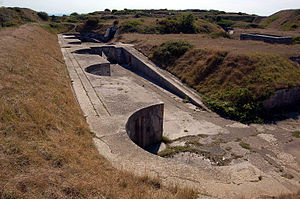 This view shows approximately one-fifth of the structure.

The Verne High Angle Battery is a derelict Victorian gun battery built in 1892 on the Isle of Portland in Dorset, England. The battery is situated in the Verne area, close to the Verne Citadel (HM Prison The Verne), Fancy's Family Farm (on site of ex-Portland Rotor Radar Station) and Nicodemus Knob. It has been Grade II Listed since May 1993.[1] In addition to this, the entire Verne Citadel has become a scheduled monument under the Ancient Monuments and Archaeological Areas Act 1979 as it appears to the Secretary of State to be of national importance. This includes the Verne High Angle Battery too.[2]

The battery was built as part of Britain's Coastal Defences in 1892 and is located in a disused Portland Stone quarry. Just to the north is the Verne Citadel with which it would have formed part of an impressive defence installation, protecting both merchant and naval shipping using Portland Harbour. Being down in a quarry the guns were hidden from view of any passing enemy ships, the element of surprise would keep them moving on. The "high angle" that the RML 9 inch 12 ton guns fired at ensured shells dropped down to inflict maximum damage on the less well protected upper decks of any attacking vessel.

Originally, positions were built for six guns - where six 9-inch RML guns were installed. Shortly after 1898, two additional pits were added however no guns were ever fitted. The guns were able to traverse through 360 degrees. The supply of shells were stored in two tunnel magazines, one at each end of the battery, using a short rail for transport. The tunnels were roofed with earth and grass. Between the magazines were bombproof troop shelters as well as laboratory, whilst two store buildings were built to the rear.[3]

The pace of maritime warfare increased with the use of smaller craft like torpedo boats, and the big guns would be far less likely to score a hit. The guns were in use until 1906.[3] The Battery was then decommissioned, with the battery being abandoned by 1907. From 1918 the battery was used for storing field guns from France. During the Second World War it became an ack-ack battery (anti-aircraft artillery) and was used to store ammunition in preparation for the D-Day landings. In the 1960s one of the emplacements was used for testing the capsules in which nuclear material was transported.[4]

The battery has become a tourist attraction, and is the best preserved Battery of its type in the United Kingdom, now a scheduled ancient monument. The battery's warm, grassy embankments have also become support for an array of wildlife.[5] The nearby East Weare Battery, located below the cliff to the east of the Verne Citadel, has remained on private land owned by Portland Port Ltd, and unlike the Verne High Angle Battery, has not been made open to the public or preserved.

Various attempts from Weymouth and Portland Borough Council have been made over the years to seal off the battery's tunnels, however continuous efforts to break into the tunnels have caused them to remain open for the public to explore. The tunnels have gained the name 'The Ghost Tunnels' to locals of Portland, due to the dark, derelict nature of them.[5] The battery has been a target of vandalism, mainly graffiti, and has received little care and attention in recent years.[6]