From Infogalactic: the planetary knowledge core
Jump to: navigation, search
This article is about the quaternionic representation of a rotation. For other uses, see Versor (disambiguation).

Versors are an algebraic parametrisation of rotations. In classical quaternion theory a versor is a quaternion of norm one (a unit quaternion).

Each versor has the form

The corresponding 3-dimensional rotation has the angle 2a about the axis r in axis–angle representation.

The word is derived from Latin versare = "to turn" with the suffix -or forming a noun from the verb (i.e. versor = "the turner"). It was introduced by William Rowan Hamilton in the context of his quaternion theory. For historical reasons, it sometimes is used synonymously with a "unit quaternion" without a reference to rotations.

In the quaternion algebra a versor

will rotate any quaternion v through the sandwiching product map

such that the scalar part of v conserves. If this scalar part (the fourth dimension of the quaternion space) is zero, i.e. v is a Euclidean vector in three dimensions, then the formula above defines the rotation through the angle 2a around the unit vector r. For this case, this formula expresses the adjoint representation of the Spin(3) Lie group in its respective Lie algebra of 3-dimensional Euclidean vectors, and the factor "2" is due to the double covering of Spin(3) over the rotation group SO(3). In other words, qvq−1 rotates the vector part of v around the vector r. See quaternions and spatial rotation for details.

A quaternionic versor expressed in the complex 2×2 matrix representation is an element of the special unitary group SU(2). Spin(3) and SU(2) are the same group. Left multiplication qv of a quaternion v to a versor q is another kind of quaternion rotation as a 4-dimensional real vector space, identical to the SU(2) action on the 2-dimensional complex space identical to quaternions (v = A + Bj). Angles of rotation in this λ = 1/2 representation are equal to a; there is no "2" factor in angles unlike the λ = 1 adjoint representation mentioned above; see representation theory of SU(2) for details.

For a fixed r, versors of the form exp(ar) where a ∈ (−π, π], form a subgroup isomorphic to the circle group. Orbits of the left multiplication action of this subgroup are fibers of a fiber bundle over the 2-sphere, known as Hopf fibration in the case r = i; other vectors give isomorphic, but not identical fibrations. In 2003 David W. Lyons[1] wrote "the fibers of the Hopf map are circles in S3" (page 95). Lyons gives an elementary introduction to quaternions to elucidate the Hopf fibration as a mapping on unit quaternions.

Presentation on 3- and 2-spheres 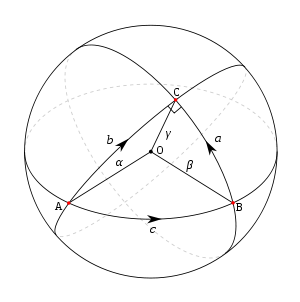 Hamilton denoted the versor of a quaternion q by the symbol Uq. He was then able to display the general quaternion in polar coordinate form

where Tq is the norm of q. The norm of a versor is always equal to one; hence they occupy the unit 3-sphere in H. Examples of versors include the eight elements of the quaternion group. Of particular importance are the right versors, which have angle π/2. These versors have zero scalar part, and so are vectors of length one (unit vectors). The right versors form a sphere of square roots of −1 in the quaternion algebra. The generators i, j, and k are examples of right versors, as well as their additive inverses. Other versors include the twenty-four Hurwitz quaternions that have the norm 1 and form vertices of a 24-cell polychoron.

Such an arc, although lying in the three-dimensional space, does not represent a path of a point rotating as described with the sandwiched product with the versor. Indeed, it represents the left multiplication action of the versor on quaternions that preserves the plane Π and the corresponding great circle of 3-vectors. The 3-dimensional rotation defined by the versor has the angle two times the arc's subtended angle, and preserves the same plane. It is a rotation about the corresponding vector r, that is perpendicular to Π.

File:Spin 180,60.svg
Two versors from orthogonal planes (such as i and 1/2(√3 + j)) multiply in both orders, giving different products represented with different spherical triangles (green)

Multiplication of quaternions of norm one corresponds to the (non-commutative) "addition" of great circle arcs on the unit sphere. Any pair of great circles either is the same circle or has two intersection points. Hence, one can always move the point B and the corresponding vector to one of these points such that the beginning of the second arc will be the same as the end of the first arc.

implicitly specifies the unit vector–angle representation for the product of two versors. Its solution is an instance of the general Campbell–Baker–Hausdorff formula in Lie group theory. As the 3-sphere represented by versors in ℍ is a 3-parameter Lie group, practice with versor compositions is a step into Lie theory. Evidently versors are the image of the exponential map applied to a ball of radius π in the quaternion subspace of vectors.

Versors compose as aforementioned vector arcs, and Hamilton referred to this group operation as "the sum of arcs", but as quaternions they simply multiply.

The geometry of elliptic space has been described as the space of versors.[3]

A hyperbolic versor is a generalization of quaternionic versors to indefinite orthogonal groups, such as Lorentz group. It is defined as a quantity of the form

Such elements arise in algebras of mixed signature, for example split-complex numbers or split-quaternions. It was the algebra of tessarines discovered by James Cockle in 1848 that first provided hyperbolic versors. In fact, James Cockle wrote the above equation (with j in place of r) when he found that the tessarines included the new type of imaginary element.

Today the concept of a one-parameter group subsumes the concepts of versor and hyperbolic versor as the terminology of Sophus Lie has replaced that of Hamilton and Macfarlane. In particular, for each r such that r r = +1 or r r = −1, the mapping

takes the real line to a group of hyperbolic or ordinary versors. In the ordinary case, when r and −r are antipodal points on a sphere, the one-parameter groups have the same points but are oppositely directed. In physics, this aspect of rotational symmetry is termed a doublet.

In 1911 Alfred Robb published his Optical Geometry of Motion in which he identified the parameter rapidity which specifies a change in frame of reference. This rapidity parameter corresponds to the real variable in a one-parameter group of hyperbolic versors. With the further development of special relativity the action of a hyperbolic versor came to be called a Lorentz boost.