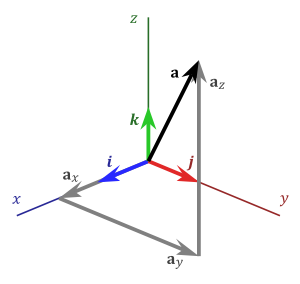 Versors i, j, k of the Cartesian axes x, y, z for a three-dimensional Euclidean space. Every vector a in that space is a linear combination of these versors.
This article is about a unit vector codirectional with an axis or with another vector. For other uses of the term versor, see Versor (disambiguation).

In geometry and physics, the versor of an axis or of a vector is a unit vector indicating its direction.

Versors of a Cartesian coordinate system

The versors of the axes of a Cartesian coordinate system are the unit vectors codirectional with the axes of that system. Every Euclidean vector a in a n-dimensional Euclidean space (Rn) can be represented as a linear combination of the n versors of the corresponding Cartesian coordinate system. For instance, in a three-dimensional space (R3), there are three versors:

They indicate the direction of the Cartesian axes x, y, and z, respectively. In terms of these, any vector a can be represented as

In linear algebra, the set formed by these n versors is typically referred to as the standard basis of the corresponding Euclidean space, and each of them is commonly called a standard basis vector.

A hat above the symbol of a versor is sometimes used to emphasize its status as a unit vector (e.g.,

In most contexts it can be assumed that i, j, and k, (or

) are versors of a 3-D Cartesian coordinate system. The notations

, with or without hat, are also used, particularly in contexts where i, j, k might lead to confusion with another quantity. This is recommended, for instance, when index symbols such as i, j, k are used to identify an element of a set of variables.

Versor of a non-zero vector

The versor (or normalized vector)

of a non-zero vector

is the unit vector codirectional with

is the norm (or length) of