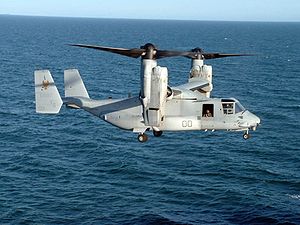 A U.S. Marine Corps MV-22 Osprey prepares to land aboard a ship

A vertical and/or short take-off and landing (V/STOL) aircraft is an airplane able to take-off or land vertically or on short runways. Vertical takeoff and landing (VTOL) aircraft are a subset of V/STOL craft that do not require runways at all. Generally, a V/STOL aircraft needs to be able to hover. Helicopters are not considered under the V/STOL classification as the classification is only used for airplanes, aircraft that achieve lift in forward flight by planing the air, thereby achieving speed and fuel efficiency that is typically greater than helicopters are capable of.

A rolling takeoff, sometimes with a ramp (ski-jump), reduces the amount of thrust required to lift an aircraft from the ground (compared with vertical takeoff), and hence increases the payload and range that can be achieved for a given thrust. For instance, the Harrier is incapable of taking off vertically with a full weapons and fuel load. Hence V/STOL aircraft generally use a runway if it is available. I.e. short takeoff and vertical landing (STOVL) or conventional takeoff and landing (CTOL) operation is preferred to VTOL operation.

V/STOL was developed to allow fast jets to be operated from clearings in forests, from very short runways, and from small aircraft carriers that would previously only have been able to carry helicopters.

The main advantage of V/STOL aircraft is closer basing to the enemy, which reduces response time and tanker support requirements. In the case of the Falklands War, it also permitted high performance fighter air cover and ground attack without a large aircraft carrier equipped with aircraft catapult.

This is a partial list, there have been many designs for V/STOL aircraft.

Although many aircraft have been proposed, built, and some even tested, the F-35B is expected to be the first supersonic VTOL aircraft in operational service.