The vertical deflection (deflection of the plumb line, astro-geodetic deflection) at a point on the earth is a measure of how far the direction of the local gravity field has been shifted by local anomalies such as nearby mountains. (Here "gravity" means apparent gravity—true gravity "reduced" by the earth's spin). They are widely used in geodesy, for surveying networks and for geophysical purposes.

The vertical deflection (abbrev. VD or ξ,η) is the angle between the true zenith (plumb line) and the line perpendicular to the surface of the reference ellipsoid chosen to approximate the earth's sea-level surface. VDs are caused by mountains and by underground geological irregularities and can amount to angles of 10″ (flat areas) or 20–50″ (alpine terrain)[citation needed].

The deflection of the vertical has a north-south component ξ and an east-west component η. The value of ξ is the difference between astronomic and geodetic latitude; the latter is usually calculated by geodetic network coordinates. The value of η is the difference between the corresponding longitudes. When a new mapping datum replaces the old, with new geodetic latitudes and longitudes on a new ellipsoid, the calculated vertical deflections will change too. 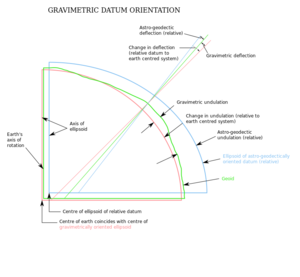 The deflections reflect the undulation of the geoid and gravity anomalies, for they depend on the gravity field and its inhomogeneities.

VDs are usually determined astronomically. The true zenith is observed astronomically with respect to the stars, and the ellipsoidal zenith (theoretical vertical) by geodetic network computation, which always takes place on a reference ellipsoid. Additionally, the very local variations of the VD can be computed from gravimetric survey data and by means of digital terrain models (DTM), using a theory originally developed by Vening-Meinesz.

VDs are used in astro-geodetic levelling, a geoid determination technique. As a vertical deflection describes the difference between the geoidal and ellipsoidal normals, it represents the horizontal gradient of the undulations of the geoid (i.e., the separation between geoid and reference ellipsoid). Given a starting value for the geoid undulation at one point, determining geoid undulations for an area becomes a matter for simple integration.

In practice, the deflections are observed at special points with spacings of 20 or 50 kilometers. The densification is done by a combination of DTM models and areal gravimetry. Precise VD observations have accuracies of ±0.2″ (on high mountains ±0.5″), calculated values of about 1–2″.

The maximal VD of Central Europe seems to be a point near the Großglockner (3,798 m), the highest peak of the Austrian Alps. The approx. values are ξ = +50″ and η = −30″. In the Himalaya region, very asymmetric peaks may have VDs up to 100″ (0.03°). In the rather flat area between Vienna and Hungary the values are less than 15", but scatter by ±10″ for irregular rock densities in the subsurface.

More recently, a combination of digital camera and tiltmeter have also been used, see zenith camera.[1]