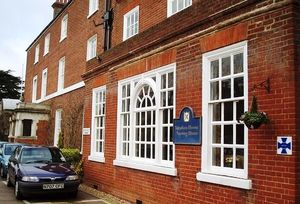 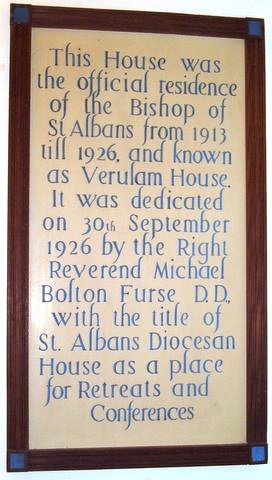 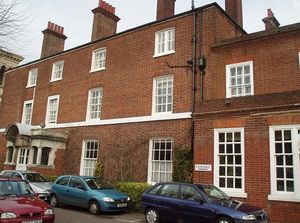 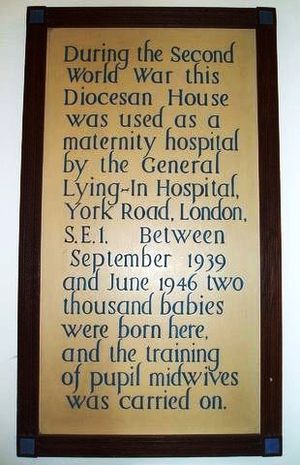 Verulam House is located in Verulam Road, St Albans AL3 4DH on the northwestern side between Church Crescent and Britton Avenue opposite College Streetgrid reference TL1454007480.

It has previously been referred to as Diocesan House and also known as the Bishop's Palace. It is of early nineteenth-century origin and is a Grade II Listed Building

Originally built as a coaching inn known as ‘The Verulam Arms’ which opened in 1826 at the same time as Verulam Road which was then a new section of a super highway (post road) built by Thomas Telford (the 'Colossus of Roads') from London to the port of Holyhead. The new road bypassed a section of the town and the narrow main road northwest out of St Albans at the time: George Street, Romeland and Fishpool Street. This new inn was reported at the time to be one of the most commodious in Hertfordshire.

In 1848, after the expansion of the railways and the subsequent decline in the stage/mail coach and carriage traffic for which St Albans depended upon for much of its prosperity, the inn was sold and its associated stables were demolished.

The former stable area provided land for the building of an adjacent Roman Catholic church under the patronage of the local MP of that time, Alexander Raphael. Mr Raphael died intestate shortly after commencement of construction of the church and the site was purchased by Mrs Isabella Worley, who had the church completed according to its original design in 1856 and donated it to the Church of England. This church was known as Christ Church and, although it has been converted to offices since the early 1970s, its Lombardic style tower can still be seen on Verulam Road just to the north west of the house.

Between 1913 and 1926 the house was the official residence of the Anglican Bishop of St Albans and was sometimes referred to as the Bishop's Palace.

From 1926 till 1939 and again from 1946 till 1994 it was used as a Diocesan Retreat and Conference Centre by the Church of England Diocese of St Albans.

Throughout the Second World War it was known as Diocesan House. It became a maternity hospital and a facility for training pupil midwives by the General Lying-In Hospital which had been evacuated from York Road, Lambeth, (Waterloo), in central London. During the period between September 1939 and June 1946 two thousand babies were born here.

The General Lying-In Hospital was re-established at its former Lambeth premises in 1946 after the end of the war.

In 1994, Verulam House was sold by the Diocese of St Albans and a trust fund set up with the proceeds.

Since 1996 the House has been the site of the 'Verulam House Nursing and Residential Home'.

Verulam House has been extensively extended and refurbished and can accommodate 50 residents for both nursing & residential care. The chapel with all its fine features, is still used today for many activities and dining.

The current complex along the Verulam Road frontage consists of three parts.

The first a three-storey building at the Old Church side of the compound is adjoined to a central two-storey structure with a chapel at the rear.

Another two-storey but detached building is located on the eastern side towards what used to be Gombard House.

The exact date of construction, number of rooms and architectural styles of all of these structures have yet to be conclusively ascertained.