From Infogalactic: the planetary knowledge core
Jump to: navigation, search
For the hamlet in Canada, see Verwood, Saskatchewan.

Verwood is a town and civil parish in Dorset, England. The town lies 15 miles (24 km) north of Bournemouth and 19 miles (31 km) north of Poole. The civil parish comprises the town of Verwood together with the extended village of Three Legged Cross, and has a population of 15,170 according to latest figures (2014) from Dorset County Council.[1] Verwood is the largest town in Dorset without an upper school.[2]

Verwood was originally recorded as Beau Bois (Norman French: "beautiful wood") in 1288, and it was not until 1329 that it got the name Verwood, which developed from Fairwood or The Fayrewood.[citation needed]

Verwood is recorded as "Fairwod" (1329) and as "Fayrwod" (1436); this name has the meaning "fair wood" and the modern form shows the change of initial "f" to "v" characteristic of many Southwestern English dialects.[3]

The East Dorset pottery industry, known collectively as Verwood Pottery, thrived from early times on the clay soils of the neighbourhood which had ample firing material close at hand. The major production was of domestic earthenware although finer and more unusual pieces have been found from earlier times. In the latter days ornamental and novelty items were produced.

Until the end of their useful life, the methods of production had not varied from Roman times, all the processes being carried out with no mechanisation or electrification. For example, the clay was always trodden by foot and not mixed in a pug mill. The wheel was turned by an assistant with a pole or handle, and the kilns were wood fired. For these reasons the Crossroads Pottery, then the last remaining in the area, attracted national and local newspaper attention in the early to mid 20th century.

The industry was not confined to a local sales base. Hawkers, or "higglers", took the wares for sale over a wide area of southern England. They were also exported abroad, especially to Newfoundland which had a thriving trade with the nearby port of Poole. Examples of Verwood pots can be seen at the Verwood Heathland Heritage Centre. 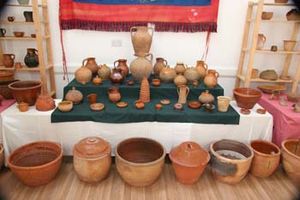 Verwood's first supermarket opened in the 1980s. In 1985 the town was twinned with the French town Champtoceaux. In 1987 the population of Verwood reached 9,856. The Parish Council passed the necessary resolution to become a Town Council under provisions made in the 1972 Local Government Act. In 1992, the new Verwood Town Council offices were opened. Later that year, the town twinned with the German town Liederbach am Taunus. In 2001, the town reached a population of 12,069. Verwood Heritage Centre was opened by Rt. Hon, the Viscount Cranborne. The centre is used as a museum of local history and a coffee shop. In 2007 the Verwood Hub, a multi-purpose cinema and theatre, opened to the public.

Today the town has a population of over 14,000, and the Verwood Town Plan is currently[when?] being constructed in an attempt to provide residents with new facilities, such as a swimming pool and an upper school.

A country market which is open from 10:00 to 11:30 is held each Friday in the Memorial Hall. The market sells locally produced seasonal vegetables and fruit, plants and cut flowers, homemade cakes and jams and craft items.

The town has two shopping areas: in the town centre, and a superstore at Pennine Way.

Verwood is home to the Hub, a community facility which opened in April 2007. The Hub houses the 300 seat Merryfield Theatre, a 100-seat hall and a number of other smaller rooms. These facilities are used for films, plays, concerts and many other activities and the rooms can be hired by various organisations. In the centre of the Hub is a bistro area, surrounded by art displays and various exhibitions.

The town is home to Verwood Concert Brass, a successful lower section brass band. The band became West of England 4th Section champions in 2005 and 2006. This resulted in two trips to the National Brass Band Finals of Great Britain in Harrogate where they finished 6th and 7th respectively. In September 2008 the band were placed second at the 3rd section national finals after winning the area championship in March, and made another 'Finals' appearance in 2009 in the 2nd section. The band now competes in the 1st section, the second-highest section in banding. They perform in many concerts in the local area including several performances at the Hub.

Forest FM is a community radio station, broadcast from Verwood for listeners based in Dorset. It hosts Europe's longest-running Beatles themed radio show ('BeatlesandBeyond') on its regular schedules.

Viewpoint Magazine has been established for over thirty-five years and has its roots in Verwood. In April 2011 the magazine expanded into West Moors, Ashley Heath and St Ives. It has over 35,000 readers. 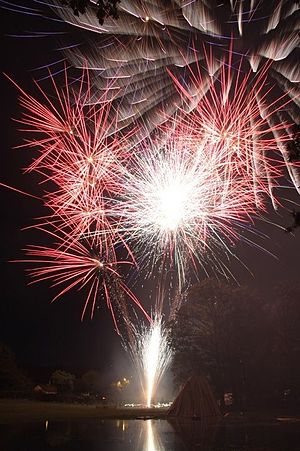 Flameburst 2012 – main display across the lake

Verwood is the home to Verwood Rugby Union Football Club, a relatively young and ambitious rugby club founded in 1995. The club's pitch is located at Potterne Park, and the club house is currently hosted by Club31 (formerly the Verwood Royal British Legion) in the town centre. Verwood RUFC are currently members of Dorset & Wilts Division 3 South League.

Verwood is also the home to the Verwood Town F.C., a football club founded in 1920. They are based at Potterne Park and are currently members of Wessex League Premier Division.

Verwood Leisure Centre provides a wide range of sport, health and fitness facilities to suit all ages, and Potterne Park provides the community with 12 acres (4.9 ha) of sporting provision including rugby, football, tennis, netball, cricket and a skate park. There is also a bowls club (green bowls)

Verwood once had its own railway station, served by the Salisbury and Dorset Junction Railway. This was closed in 1964. The nearest stations to the town are: Christchurch 11.9 miles, Hinton Admiral 13.3 miles and Bournemouth 13.6 miles.

The nearest airport to the town is Bournemouth Airport, which is served by RyanAir, Palmair and Thomson Airways.

Schooling in Verwood is based on the 2-tier system, first and middle. Verwood CoE First, Hillside First and Trinity CoE VA First accommodate children aged from 4–9.

Emmanuel Middle CoE VA School takes children from the three first schools, at ages 9–13. The school is next to Verwood First School.

Plans to open an upper school in Verwood were discussed as part of the 2010 Verwood Town Plan.