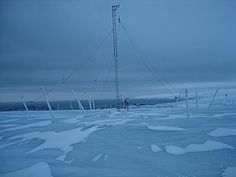 Very low frequency or VLF is the ITU designation[1] for radio frequencies (RF) in the range of 3 kHz to 30 kHz and wavelengths from 10 to 100 kilometres. Due to its limited bandwidth, audio (voice) transmission is highly impractical, and therefore, only low data rate coded signals are used. The VLF band is used for a few radio navigation services, government time radio stations (broadcasting time signals to set radio clocks) and for secure military communication. Since VLF waves penetrate about 40 meters into saltwater, they are used for military communication with submarines. The band is also known as the myriametre band or myriametre wave as the wavelengths range from one to ten myriametres (an obsolete metric unit equal to 10 kilometres).

Because of their large wavelengths, VLF radio waves can diffract around large obstacles and so are not blocked by mountain ranges, and can propagate as ground waves following the curvature of the Earth. The main mode of long distance propagation is an Earth-ionosphere waveguide mechanism.[2] The Earth is surrounded by a conductive layer of electrons and ions in the upper atmosphere, the ionosphere D layer at 60 km altitude,[3] which reflects VLF radio waves. The ionosphere and the conductive Earth, form a horizontal "duct" a few VLF wavelengths high, which acts as a waveguide confining the waves so they don't escape into space. The waves travel in a zigzag path around the Earth, reflected alternately by the Earth and the ionosphere, in TM (transverse magnetic) mode.

VLF waves have very low path attenuation, 2-3 dB per 1000 km,[2] with little of the "fading" experienced at higher frequencies,[3] This is because VLF waves are reflected from the bottom of the ionosphere, while higher frequency shortwave signals are returned to Earth from higher layers in the ionosphere, the F1 and F2 layers, by a refraction process, and spend most of their journey in the ionosphere, so they are much more affected by ionization gradients and turbulence. Therefore, VLF transmissions are very stable and reliable, and are used for long distance communication. Propagation distances of 5000 to 20000 km have been realized.[2] However, atmospheric noise (sferics) is high in the band,[3] including such phenomena as "whistlers", caused by lightning.

VLF waves can penetrate seawater to a depth of at least 10 to 40 meters (30 to 130 feet), depending on the frequency employed and the salinity of the water, so they are used to communicate with submarines.

VLF waves at certain frequencies have been found to cause electron precipitation (TIPER).

"Trideco" antenna tower array at the US Navy's Naval Radio Station Cutler in Cutler, Maine, USA. The central mast is the radiating element, while the star-shaped horizontal wire array is the capacitive top load. About 1.2 miles in diameter, it communicates with submerged submarines at 24 kHz at a power of 1.8 megawatts, the most powerful radio station in the world. 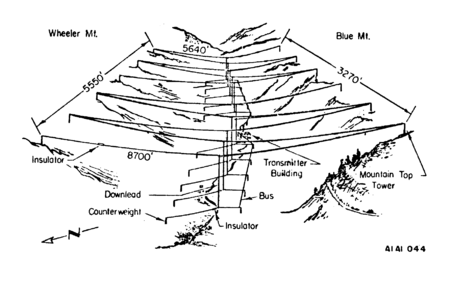 Another type of large VLF antenna: the "valley-span" antenna, consisting of multiple horizontal topload cables spanning a valley, fed in the center by vertical radiators. This example is at the US Navy Jim Creek station near Seattle, which transmits on 24.8 kHz at a power of 1.2 MW.

A major practical drawback to this band is that because of the length of the waves, full size resonant antennas (half wave dipole or quarter wave monopole antennas) cannot be built because of their physical height. Vertical antennas must be used because VLF waves propagate in vertical polarization, but a quarter-wave vertical antenna at 30 kHz would be 2.5 kilometers high. So practical transmitting antennas are electrically short, a small fraction of a wavelength long. Due to their low radiation resistance they are inefficient, radiating only 10% to 50% of the transmitter power at most.[2] with the rest of the power dissipated in the antenna/ground system resistances. Very high power transmitters (~1 megawatt) are required to radiate enough power for long distance communication.

Transmitting antennas for VLF frequencies are very large wire antennas, up to a mile across. They consist of a series of steel radio masts, linked at the top with a network of cables, often shaped like an umbrella or clotheslines. Either the towers themselves or vertical wires serve as monopole radiators, and the horizontal cables form a capacitive top-load to increase the efficiency of the antenna. High power stations use variations on the umbrella antenna such as the "delta" and "trideco" antennas, or multiply-tuned flattop (triatic) antennas. For low power transmitters, inverted-L and T antennas are used. A large loading coil is required at the antenna feed point to cancel the capacitive reactance of the antenna to make it resonant.

To minimize power dissipated in the ground, these antennas require extremely low resistance ground systems. Because of soil resistance, counterpoise systems are often used, consisting of radial networks of copper cables supported several feet above the ground under the antenna, extending out radially from the mast or vertical element.

The high capacitance and inductance and low resistance of the antenna-loading coil combination, makes it act electrically like a high Q tuned circuit. VLF antennas have very narrow bandwidth and to change the transmitting frequency requires a variable inductor (variometer) to tune the antenna. The large VLF antennas used for high power transmitters usually have bandwidths of only a few tens of hertz, and when transmitting frequency shift keying (FSK), the usual mode, the resonant frequency of the antenna must sometimes be dynamically shifted with the modulation, between the two FSK frequencies.

Part of the aerial of the Grimeton VLF transmitter

The frequency range below 9 kHz is not allocated by the International Telecommunication Union and may be used in some nations license-free.

VLF is used to communicate with submarines near the surface (for example using the transmitter DHO38), while ELF is used for deeply submerged vessels. VLF is also used for radio navigation beacons (alpha) and time signals (beta). VLF is also used in electromagnetic geophysical surveys.[4]

In the USA, the time signal station WWVL began transmitting a 500 W signal on 20 kHz in August 1963. It used Frequency Shift Keying (FSK) to send data, shifting between 20 kHz and 26 kHz. The WWVL service was discontinued in July 1972.

Historically, this band was used for transcontinental radio communication during the wireless telegraphy era between about 1900 and 1925. Nations built networks of high power LF and VLF radio stations which transmitted text information by Morse code, to communicate with their colonies and naval fleets. Early attempts were made to use radiotelephone using amplitude modulation and single-sideband modulation within the band starting from 20 kHz, but the result was unsatisfactory because the available bandwidth was insufficient to contain the sidebands. The Grimeton VLF transmitter at Grimeton near Varberg in Sweden, one of the few remaining transmitters from that era which has been preserved as a historical monument, can be visited by the public at certain times, such as on Alexanderson Day.

Naturally occurring signals in the VLF band are used for long range lightning location and for research into phenomena such as transient luminous events. Measurements of whistlers are employed to infer the physical properties of the magnetosphere.

High power land-based transmitters in countries that operate submarines send signals that can be received thousands of miles away. Transmitter sites typically cover great areas (many acres or square kilometres), with transmitted power anywhere from 20 kW to 2 MW. Submarines receive the signal using some form of towed antenna which floats just under the surface of the water – for example a BCAA (Buoyant Cable Array Antenna). Modern receivers use sophisticated digital signal processing techniques to remove the effects of atmospheric noise (largely caused by lightning strikes around the world) and adjacent channel signals, extending the useful reception range.

Because of the low bandwidth available it is not possible to transmit audio signals, therefore all messaging is done with alphanumeric data at very low bit rates. Three types of modulation are used:

Two alternative character sets may be used: 5-bit ITA2 or 8-bit ASCII. Because these are military transmissions they are almost always encrypted for security reasons. Although it is relatively easy to receive the transmissions and convert them into a string of characters, civilians cannot decode any encrypted messages because they most likely use one-time pads since the amount of text is so small.

Spectrogram of a 18.1 kHz VLF signal, picked up using a small loop antenna and a sound card. The vertical stripes are distant lightnings.

VLF signals are often monitored by radio amateurs using simple homemade VLF radio receivers based on personal computers (PCs).[5][6] An aerial in the form of a coil of insulated wire is connected to the input of the soundcard of the PC (via a jack plug) and placed a few metres away from it. Fast Fourier transform (FFT) software in combination with a sound card allows reception of all frequencies below the Nyquist frequency simultaneously in the form of spectrogrammes. Because CRT monitors are strong sources of noise in the VLF range, it is recommended to record the spectrograms with any PC CRT monitors turned off. These spectrograms show many signals, which may include VLF transmitters and the horizontal electron beam deflection of TV sets. The strength of the signal received can vary with a Sudden Ionospheric Disturbance. These cause the ionization level to drop in the atmosphere. The result of this is that the VLF signal will reflect down to Earth with greater strength.