Vesoul is a commune in the Haute-Saône department in the region of Franche-Comté located in eastern France.

It is the most populated municipality of the department with 15,920 inhabitants in 2009, and is the seventh largest city in Franche-Comté. The same year, the Urban community of Vesoul which covers 19 municipalities together had 34,055 inhabitants while the Urban area of Vesoul which includes 78 municipalities, had 59,244 inhabitants. Its urban area is the fifth largest Franche-Comté. Its inhabitants are known in French as Vésuliens. Nicknamed the "Nice of the East", the reputation of Vesoul-based primarily on the song "Vesoul" by Jacques Brel and the Vesoul International Film Festival of Asian Cinema. Its 16,000 inhabitants, account Vesoul 2000 students and 8000 licensed sport. The city has received many labels and names that reflect the investigation brings to life Vesoul common.

Built on top of the hill de la Motte, in the first millennium, the old medieval town of Castrum Vesulium, the city is gradually presented as European commercial and economic center with many traders and exchangers and European Jews. At the end of the Middle Ages, the city experienced a period of strong difficulties as plagues, epidemics, destruction ...

Main urban center of the department, Vesoul is also the capital of the logistics industry with the PSA Vesoul Plant and the seat of several institutions such as the Regional Centre for Restoration of Works of Art.

The town is the capital of the department.

Vesoul is first mentioned in a document dated 899. That document speaks about an elevation with a fortified watchtower. The document speaks about "Castrum Vesulium". Castrum is a fortification, and "Vesulium" has the syllable ves which meant hill or mountain in a language that was spoken before the Celts. Today, there is a castle that forms the centre of the city. The first houses were built inside the walls of the castle. Newcomers who found no place settled outside the city walls, on the flanks of the hill. Growing wine was popular. In 1814, after the fall of the empire, a buffer state was created, with Vesoul as capital. The principality was that of Free County, of the Vosges and of Porrentruy.

Today, one of the main factories of PSA Peugeot Citroën is near Vesoul. 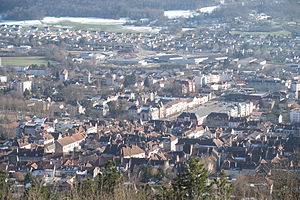 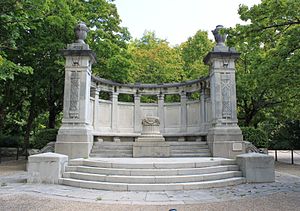 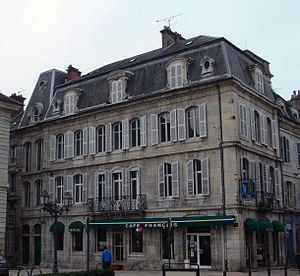 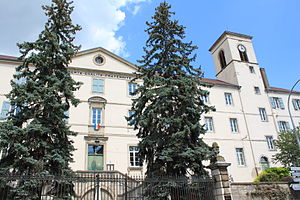 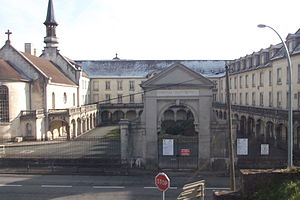 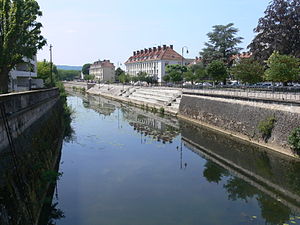 The first public library of Vesoul opened in 1771. The abbé (abbot) Bardenet, superior of the Saint-Esprit hospital in Besançon, gave his book collection to the town. There were 1772 books. The collections became a lot larger with the Revolution. At that time, the revolutionaries (people who led the French Revolution) took the books from the monasteries of the town (capucins) and even of the region (Luxeuil and Faverney monasteries). Around 20,000 books were added to the library this way, including some 11th century manuscripts. The Mayor's office was responsible for keeping the books.

In 1981, the municipality decided to build a new building to encourage the public to read. The library was recently equipped with computers. There are around 200 manuscripts and 150 incunables.

Vesoul is also the name of a song by Jacques Brel from 1968, a fast paced waltz during the recording of which Brel famously yelled «Chauffe, Marcel, chauffe!» ("heat up, Marcel, heat up!") at his accordionist, Marcel Azzola.

The town is also mentioned facetiously in the satirical rap Fous ta cagoule by Michael Youn.[3]

Vesoul has schools of higher education. The city has 1,200 students divided between an IUT, an IUFM, an Institute of Nursing Training, a School of Management and Commerce and BTS.
A Council of Student Life (CVE), led by the Officer in charge of Higher Education, was established in 2011. It offers activities to stimulate student life. In all, Vesoul has 10,000 students.

All schools and studies in Vesoul

The French article is much more detailed: http://fr.wikipedia.org/wiki/Vesoul (It is possible to translate the page into English).