From Infogalactic: the planetary knowledge core
Jump to: navigation, search
For other uses, see Vest (disambiguation).

A vest is a sleeveless garment covering the upper body. The term has different meanings around the world.

Waistcoat
(a sleeveless under-jacket). This is called a waistcoat in the UK and many Commonwealth countries, or a vest in the US and Canada. It is often worn as part of formal attire, or as the third piece of a lounge suit.
Cut-off
See also Kutte. Popular in biker cultures throughout Europe and North America. The Cut-off is a type of vest typically made from cotton or denim with no sleeves. Often decorated with patches or pictures of biker related subjects and/or logos. The Cut-off vest is still a vest, regardles of the presence of a collar, pockets, heavy liners, buttons, zippers, or length. May be tucked in or worn outside the pants. 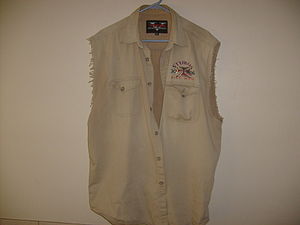 A typical Cut-off vest worn by bikers in North America and Europe.
A-shirt
(an undergarment, normally worn under a shirt). It is known as an A-shirt or tank top in the US and Canada, vest in the UK and many Commonwealth countries, and singlet in Australia.
Other sleeveless jackets
Vest may refer to other outer garments, such as a sports tank top, or a padded sleeveless jacket popular for hunting, commonly known as a hunting vest. Another common variant is the fishing vest which carries a profusion of external pockets for carrying fishing tackle. The term jerkin is also used to refer to this sort of sleeveless outdoor coat.
A sweater vest (American and Canadian English)
This may also be called a slipover, sleeveless sweater, or, in British English, a tank top. In Australia this may be colloquially referred to as a baldwin.
Banyan
This Indian garment is commonly called a vest in Indian English.
Flannel vest
A garment, usually worn instead of an overcoat.[citation needed] Since the inception of the flannel vest, the garment has been praised for its heat retention properties, this is a major contributing factor to its popularity. Historically, flannel vests were regarded as a status symbol in some regions of United States, Canada, and the Soviet Union, particularly in rural communities.[citation needed] This trend was re-ignited in the 1920s, when the flannel vest phenomenon was re-ignited in South Carolina.[citation needed] The re-emergence of the garment as a counter-cultural statement in the 1990s, was spearheaded by such grunge luminaries as Nirvana.[citation needed]

The term vest derives from French veste "jacket, sport coat", Italian vesta, veste "robe, gown" and Latin vestis. The sleeveless garment worn by men beneath a coat may have been first popularised by King Charles II of England, since a diary entry by Pepys (October 8, 1666) records that "[t]he King hath yesterday, in Council, declared his resolution of setting a fashion for clothes.... It will be a vest, I know not well how; but it is to teach the nobility thrift."[1]