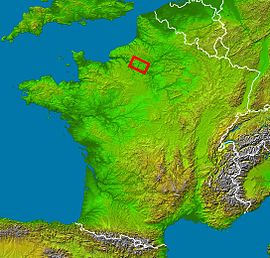 Map of France showing the general location of the historical Vexin region. 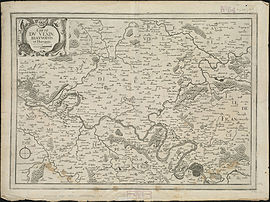 Map of the Vexin, Beauvoisis, and Hurepoix by Christophe Nicolas Tassin, 1634.

The Vexin (French pronunciation: ​[vɛksɛ̃]) is a historical county of northwestern France. It covers a verdant plateau on the right bank (north) of the Seine comprising an area east-to-west between Pontoise and Romilly-sur-Andelle (about 20 km before Rouen), and north-to-south between Auneuil and the Seine near Vernon. The plateau is crossed by the Epte and the Andelle river valleys.

The name of the Vexin is derived from a name for a Gaulish tribe now known as the Veliocasses that inhabited the area and made Rouen their most important city.

The Norse nobleman Rollo of Normandy (ca. 846–ca. 931), the first ruler of the Viking principality that became Normandy, made several incursions into the western half of the county. He halted his actions when the Carolingian king Charles the Simple abandoned the part of the territory that Rollo occupied under the Treaty of Saint-Clair-sur-Epte in 911. The terms of the treaty established the Duchy of Normandy and fixed its boundary with the Kingdom of France along the river Epte. This divided the county of Vexin into two parts:

During the twelfth century, the Vexin was a heavily contested border between the Angevin kings of England and Capetian France. It was of particular importance because of the close proximity to Paris and the location of the route to the coastal cities of Normandy. As a result, the Vexin was the site of defensive castle construction, notably at Château Gaillard.

Today, the Vexin is shared by parts of five departments of France: Val-d'Oise and Yvelines in the Île-de-France region; Oise in the Picardie region; and Eure and Seine-Maritime in the Haute-Normandie region. The major towns are Pontoise, Vernon, Meulan-en-Yvelines, Gisors, and Les Andelys. The plateau is primarily an agricultural region with some manufacturing located in the valleys.

The French Impressionist artist Claude Monet made his home at Giverny, and the Dutch Post-Impressionist Vincent van Gogh painted the wheat fields of Vexin.

A regional nature park was established in the French Vexin in 1995.

Ownership of the Vexin, and the court intrigue related to securing it, is a key plot point in James Goldman's play The Lion in Winter. It also features in the Angevin novels of Sharon Kay Penman.