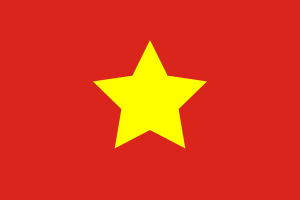 listen; abbreviated from Việt Nam Độc Lập Đồng Minh Hội, English "League for the Independence of Vietnam") was a national independence coalition formed at Pác Bó on May 19, 1941. The Việt Nam Độc Lập Đồng Minh Hội had previously formed in Nanjing, China, at some point between August 1935 and early 1936 when the non-communist Vietnamese Nationalist of other Vietnamese nationalist parties formed an anti-imperialist united front. This organization soon lapsed into inactivity, only to be revived by the ICP and Ho Chi Minh in 1941.[1] The Việt Minh initially formed to seek independence for Vietnam from the French Empire. The United States supported France. When the Japanese occupation began, the Việt Minh opposed Japan with support from the United States and the Republic of China. After World War II, the Việt Minh opposed the re-occupation of Vietnam by France and later opposed South Vietnam and the United States in the Vietnam War.

During World War II, Japan occupied French Indochina. As well as fighting the French, the Việt Minh started a campaign against the Japanese. As of the end of 1944, the Viet Minh claimed a membership of 500,000, of which 200,000 were in Tonkin, 150,000 in Annam, and 150,000 in Cochinchina. Due to their opposition to the Japanese, the Việt Minh received funding from the United States, Soviet Union and the Republic of China. When Japan surrendered in August 1945, the Japanese handed over control of some public buildings and weapons requisitioned from the French army to the Việt Minh, now led by Hồ Chí Minh, after turning in the Vietnamese nationalist leaders of the Việt Minh to the French colonialists. The Việt Minh also recruited more than 600 of the Japanese soldiers, who fought in the war against France until 1954. After the nationalist organizations proclaimed the independence of Việt Nam, Hồ proclaimed the Democratic Republic of Vietnam on September 2, 1945.

Main articles: First Indochina War and 1940-1946 in the Vietnam War

However, within days, the Chinese Kuomintang (Nationalist) Army arrived in Vietnam to supervise the repatriation of the Japanese Imperial Army. The Democratic Republic of Vietnam therefore existed only in theory and effectively controlled no territory. A few months later, the Chinese, Vietnamese and French came to a three-way understanding. The French gave up certain rights in China, the Việt Minh agreed to the return of the French in exchange for promises of independence within the French Union, and the Chinese agreed to leave. Negotiations between the French and Việt Minh broke down quickly. What followed was nearly ten years of war against France. This was known as the First Indochina War or, to the Vietnamese, the French War.

The Việt Minh, who were short on modern military knowledge, created a military school in Tỉnh Quảng Ngãi in June 1946. More than 400 Vietnamese were trained by Japanese defectors in this school. These soldiers were considered to be students of the Japanese. Later, some of them fought as generals against the United States in the Vietnam War or, to the Vietnamese, the American War.

French General Jean-Étienne Valluy quickly pushed the Việt Minh out of Hanoi. His French infantry with armored units went through Hanoi, fighting small battles against isolated Việt Minh groups. The French encircled the Việt Minh base, Việt Bắc, in 1947, but failed to defeat the Việt Minh forces, and had to retreat soon after. The campaign is now widely considered a Việt Minh victory over the well-equipped French force.

The Việt Minh continued fighting against the French until 1949, when the border of China and Vietnam was linked together as the result of the campaign called Chiến dịch Biên giới (Borderland Campaign). The newly communist People's Republic of China gave the Việt Minh both sheltered bases and heavy weapons with which to fight the French. With the additional weapons, the Việt Minh were able to take control over many rural areas of the country. Soon after that, they began to advance towards the French occupied areas.

North Vietnam and the end of the Việt Minh

Following their defeat at the Battle of Điện Biên Phủ, the French began negotiations to leave Vietnam. As a result of peace accords worked out at the Geneva Conference in Geneva, Switzerland, Vietnam was divided into North Vietnam and South Vietnam at the 17th Parallel as a temporary measure until unifying elections could take place in 1956. Transfer of civil administration of North Vietnam to the Việt Minh was given on October 11, 1954. Hồ Chí Minh was appointed Prime Minister of North Vietnam, which would be run as a socialist state. Ngô Đình Diệm, who was previously appointed Prime Minister of South Vietnam by Emperor Bảo Đại, eventually assumed control of South Vietnam.

The Geneva Accords promised elections in 1956 to determine a national government for a united Vietnam. Neither the United States government nor Ngô Đình Diệm's State of Vietnam signed anything at the 1954 Geneva Conference. With respect to the question of reunification, the non-communist Vietnamese delegation objected strenuously to any division of Vietnam, but lost out when the French accepted the proposal of Viet Minh delegate Phạm Văn Đồng,[3] who proposed that Vietnam eventually be united by elections under the supervision of "local commissions".[4] The United States countered with what became known as the "American Plan", with the support of South Vietnam and the United Kingdom.[5] It provided for unification elections under the supervision of the United Nations, but was rejected by the Soviet delegation.[5] From his home in France, Emperor Bảo Đại appointed Ngô Đình Diệm as Prime Minister of South Vietnam. With American support, in 1955 Diệm used a referendum to remove the former Emperor and declare himself the president of the Republic of Vietnam.

When the elections failed to occur, Việt Minh cadres who stayed behind in South Vietnam were activated and started to fight the government. North Vietnam also occupied portions of Laos to assist in supplying the guerilla fighting National Liberation Front in South Vietnam. The war gradually escalated into the Second Indochina War, more commonly known as the Vietnam War in the West and the American War in Vietnam.

Khmer Việt Minh were the 3,000 to 5,000 Cambodian communist cadres, left-wing members of the Khmer Issarak movement regrouped in the United Issarak Front after 1950, most of whom lived in exile in North Vietnam after the 1954 Geneva Conference. It was a derogatory term used by Norodom Sihanouk, dismissing the Cambodian leftists who had been organizing pro-independence agitations in alliance with the Vietnamese.[6] Sihanouk's public criticism and mockery of the Khmer Viet Minh had the damaging effect of increasing the power of the hardline, anti-Vietnamese, but also anti-monarchist, members of the CPK, led by Pol Pot.[7]

The Khmer Viet Minh were instrumental in the foundation of the Cambodian Salvation Front (FUNSK) in 1978. The FUNSK invaded Cambodia along with the Vietnamese Army and overthrew the Democratic Kampuchea Pol Pot state. Many of the Khmer Viet Minh had married Vietnamese women during their long exile in Vietnam.[8]