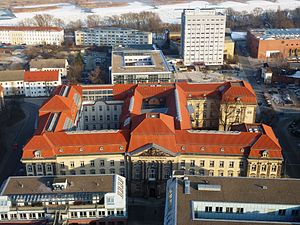 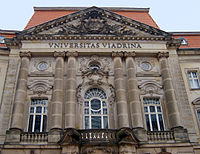 The front portal of the main building of the Viadrina 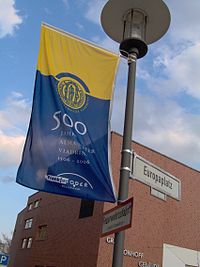 The Viadrina celebrated the 500th anniversary of its founding in 2006 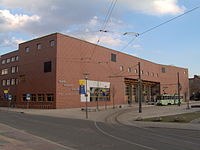 The Countess Dönhoff Building houses lecture rooms and the dining hall
File:EUVMainBuildingOderturm.jpg
The south side of the main building (built 1898-1906), showing the Oderturm in the background 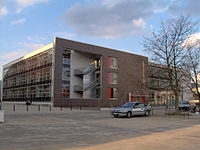 The Audimax building, known colloquially as the Flachbau ("flat building"), is a modernized GDR-era building that houses the university auditorium

The word "Viadrina," from Latin, means "belonging to, or situated at, the Oder River": it derives from Viadra, the Latin name for the Oder (the city of Frankfurt was known in Latin as Francofortum ad Viadrum).

The Alma Mater Viadrina was founded in 1506 by Joachim I Nestor, Elector of Brandenburg, as the principal university of Brandenburg. It was organized into four faculties: law, theology, philosophy, and medicine. The university enjoyed an excellent reputation in Brandenburg and the surrounding regions, and its graduates had high positions in administration, politics, law and the church. One of its earliest chancellors, Bishop Georg von Blumenthal (1490-1550) was a vigorous opponent of the Protestant Reformation and did his utmost to expel Lutherans such as Jodocus Willich.

In 1736 the eminent jurist Johann Jakob Moser was called to head the Faculty of Law at the university, but had to leave after three years due to his thoroughly Liberal ideas which were disliked by then King Frederick William I of Prussia.

In 1811 the university of Frankfurt was moved to Breslau (Wrocław) and merged with the University of Breslau, the Leopoldina, in order to be competitive with the newly founded University of Berlin. Some of the Viadrina professors did, however, accept positions in Berlin.

The old university building in Frankfurt was damaged in World War II and controversially demolished in the early 1960s. Only the arch of the main entrance has been preserved as a monument.

In 1991 the university was re-established as Viadrina European University. It currently comprises three faculties: Economics and Business Studies; Law; and Cultural Studies. A prime focus of the educational program is to attract students from throughout Europe in order to create a multinational student body. Currently about 40 percent of the students are foreigners (mostly Polish), a greater proportion than at other German universities.

Viadrina European University maintains close cooperation with Adam Mickiewicz University in Poznań, Poland. The two universities jointly operate the Collegium Polonicum, located just opposite Viadrina on the Polish side of the Oder River.

Notable among the research institutions at Viadrina University is the Frankfurt Institute of Transformational Studies (FIT). The Institute is a substantial contributor to research on economies in transition.

The university's former president, Professor Gesine Schwan, ran for President of Germany both in 2004 and 2009, being narrowly defeated by Horst Köhler twice. Former diplomat Gunter Pleuger has served as the university's president since October 1, 2008. Pleuger was followed by slavicist Alexander Wöll on October 1, 2014.

Students of the University